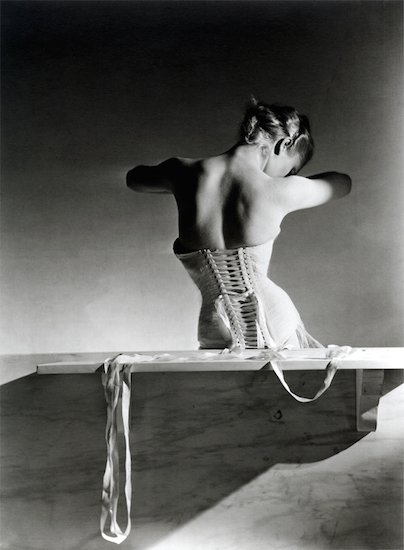 “Fashion is an expression of the times. Elegance is something else again.”

Horst P. Horst (1906-99) created images that transcend fashion and time. He was a master of light, composition and atmospheric illusion, who conjured a world of sensual sophistication. In an extraordinary sixty-year career, his photographs graced the pages of Vogue and House and Garden under the one-word photographic byline ‘Horst’. He ranks alongside Irving Penn and Richard Avedon as one of the pre-eminent fashion and portrait photographers of the 20th century.

An international figure, Horst worked predominantly in Paris and New York.Born in Germany, he became an American citizen in 1943, changing his surname from Bohrmann to Horst. His extraordinary range of work outside the photographic studio conveys a relentless visual curiosity and life-long desire for new challenges. The huge collection of prints, drawings, notebooks, scrapbooks and letters that Horst carefully preserved throughout his life, alongside thousands of prints in the archives of Condé Nast, bear witness to his virtuoso talent.

When Horst joined Vogue in 1931, Paris was still the world’s undisputed centre of high fashion. Photography had begun to eclipse graphic illustration in fashion magazines and the publisher Condé Montrose Nast devoted large sums to improving the quality of image reproduction. He insisted that Vogue photographers work with a large format camera, which produced richly detailed negatives measuring ten by eight inches.

The creation of a Horst photograph was a collaborative process, involving the talents of the photographer and model, the art director, fashion editor, studio assistants and set technicians. The modeling profession was still in its infancy in the 1930s and many of those who posed under the hot studio lights were stylish friends of the magazine’s staff, often actresses or aristocrats.

Horst’s portraits spanned a wide cross-section of subjects, from artists and writers to presidents and royalty. In the 1930s, he became aware of a new focus for his work. As he later noted in his book Salute to the Thirties (1971), glamorous Hollywood movie stars were imperceptibly assuming the place left vacant by Europe’s vanishing royal families. With the approach of the Second World War, the escapism offered by theatre and cinema gained in popularity. Horst began to photograph these new, classless celebrities, both in costume and as themselves.

The first well-known star Horst photographed was the English performer Gertrude Lawrence, then appearing in Ronald Jeans’ play Can the Leopard…? at the Theatre Royal, Haymarket. Horst’s first portrait of a Hollywood actress, Bette Davis, appeared in Vogue’s sister magazine Vanity Fair in 1932. During the 1940s Horst worked primarily in the Condé Nast studio on the 19th floor of the Graybar Building, an Art Deco skyscraper on Manhattan’s Lexington Avenue. The busy studio was well equipped with a variety of lights and props and Horst worked closely with talented art director Alexander Liberman. Like Horst, he had found refuge in the artistic circles of Paris and New York, and enjoyed a long career with Condé Nast.

By 1946 dressing the American woman had become one of the country’s largest industries, grossing over six billion dollars a year. The staff of Vogue expanded accordingly. Horst developed a new approach to photography in response to the abundance of daylight and for a time his famous atmospheric shadows disappeared.

The exhibition will follow Horst from the 1930s up until the 1980s.