Imogen Poots: Photography by Indira Cesarine for The Untitled Magazine

“If something is complex or challenging, it’s actually extremely valuable.” The effortlessly stunning actress Imogen Poots has, in the infancy of her career, made a point of choosing work that is exactly that: complex and challenging. The result has been a diverse filmography that shows no real sign of slowing down—which is exactly how Poots likes it. She started the year starring alongside Zac Efron in the romantic comedy That Awkward Moment. This spring, she co-starred with Breaking Bad’s Aaron Paul in not one, but two films: the action thriller Need for Speed, and Pascal Chaumeil’s A Long Way Down. Later this year, she will appear alongside Christian Bale in the highly-anticipated new Mallick film, Knight of Cups. She will also be starring in the upcoming Jimi Hendrix biopic, All Is By My Side, co-starring Andre 3000. She plays opposite James McAvoy in the Trainspotting sequel titled Filth, and is particularly excited about her role starring opposite Jennifer Aniston in the comedy Squirrels to the Nuts. The combination of these roles will undoubtedly propel the twenty-five-year-old into the covetable position of being one of the most in-demand actresses in Hollywood.

Check out an excerpt from Imogen’s six page interview in The “Legendary” Issue 7 below and make sure to pick up a copy The Untitled Magazine featuring her cover and story out now! Visit our online store to buy your copy, or download the free “Legendary” Issue App on iTunes now!

Indira Cesarine: When did you first realize that you wanted to be an actress?

Imogen Poots: When I was about fifteen I joined a theater group outside of school. It was something that I found really invigorating, just because it was about confidence within a group of strangers and you all have to trust each other and just come up with something, however crazy the idea was – because it was improvisation based. It was all about how you could start anywhere and if the people around you support your idea then you can just run with it. That was something really powerful that I learned there, and I just loved it. I felt comfortable in that environment, with those sort of people. There was a time when I realized it had been a couple of years, and it was what I wanted to do: you start talking about things in school, you start talking about college and life after school and I realized I wanted to just keep doing this. Why would you give up something that’s given you such happiness and inspiration? I just loved it. It surprises me every year; you think you understand it and then it will throw something crazy at you. There’s no routine or formula its just constantly changing direction, and I love that.

IC: You were working at such a young age with a lot of incredible actors, were you ever intimidated by that?

IP: I think it was probably actually being young in those environments that helped me. I would like to think of it as like when you’re on an airplane; when I fly now I’m so aware of like ‘Oh, I’m on this piece of metal just up in the clouds and just having complete faith that everything is going to be fine.’ and I think the same thing like when I was younger on a plane I never really thought twice about what I was actually doing. I think with acting at that age too you just sort of throw yourself into it, and you’re just thrilled to be there. As you grow up a bit and become more sensitive to your surroundings or more aware of what this whole industry means, you do get sometimes terrified for completely the right reasons, because it pushes you to work harder, or make yourself vulnerable. You really find the importance of making yourself vulnerable.

IC: Over the course of your experiences working on your various productions, have you ever had a difficult performance or experience that was hard to get through?

IP: I think if there are difficulties because of the complexity from the character, you want to fully embrace that. That again comes back to the whole idea that if something is complex or challenging, it’s actually possibly extremely valuable. But you certainly start to learn very quickly the differences between when there’s maybe a studio involved in a project, that can inevitably put limitations on things. Even, like, clothing options! Like True Romance – to me Patricia Arquette’s costume is just such a special, unique extension of her character, you just want to eat it all up! It’s a shame with studio pictures when something has to be bland and therefore safe, because you actually lose the ability to create something with the character.

IC: Can you tell me a little bit about some of the movie roles you have coming up?

IP: One I’m excited about is certainly Squirrels for the Nuts, and that has Jennifer Anniston in it. She plays my therapist, which is hilarious. I was struck, to be honest, by how she’s such a strong lady, and I think its so inspiring to meet a woman who is so about women, and she really is! So it was really fun, and I liked her so much. The role was just the best thing ever. I play this Brooklyn prostitute who has a big dream of being an actress. It’s certainly in a sense a farce, like the idea behind the film is sort of interlinking plot lines and characters so its kind of chaotic in a sense. What I found interesting is the plot could be seen as quite chaotic, but then you’ve got a filmmaker like Bagdonovich at the head of it who is so simple with his process, in terms of clarity with what he’s going to shoot that day, and how it will be edited. So, all of that together was a really amazing time.

IC: Who would you consider to be a legendary artist that inspires you?

IP: I would think about Leonard Cohen, Bob Dylan, those sort of musicians are legendary in my eyes. I’m very affected by a person like Jack Nicholson. To me he represents a time that has passed, which is sad. That era stands on its own two feet separate from now, otherwise it wouldn’t have the impact that it does. I think of him, and that whole set, in terms of “legendary”. Also I think about somebody like William Faulkner, as a writer he’s somebody I love and there is something about his writing that you almost forget that they existed on the same earth. It has that kind of ability to move you.

IC: What other upcoming projects do we have to look out for with you this year?

IP: I’ve got this film called Always By My Side which is about Jimi Hendrix. I’m really excited about that! I play Linda Keith who was Hendrix’s girlfriend. I had a wonderful time making it, and the film is really cool. It was linear on the page, but our director got Malik’s editor to go over it, so it’s kind of got a kick. It’s got something going on with it. Andre 3000 plays Hendrix and he really is just extraordinary in the film. 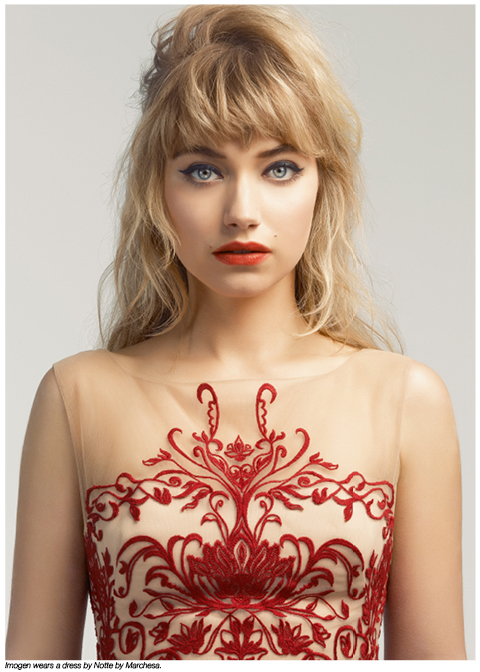 Look 1
Imogen wears a dress by Notte by Marchesa.
Look 2
Same as Look 1

For more exclusive images of the lovely Imogen Poots, pick up a copy of The ‘Legendary” Issue 7 – on sale now.

Check out the exclusive behind the scenes video with Imogen! 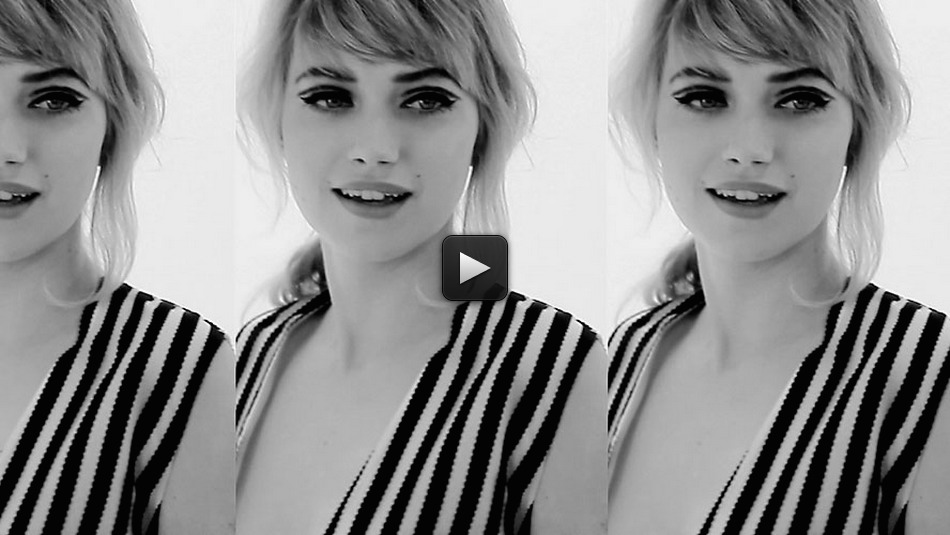