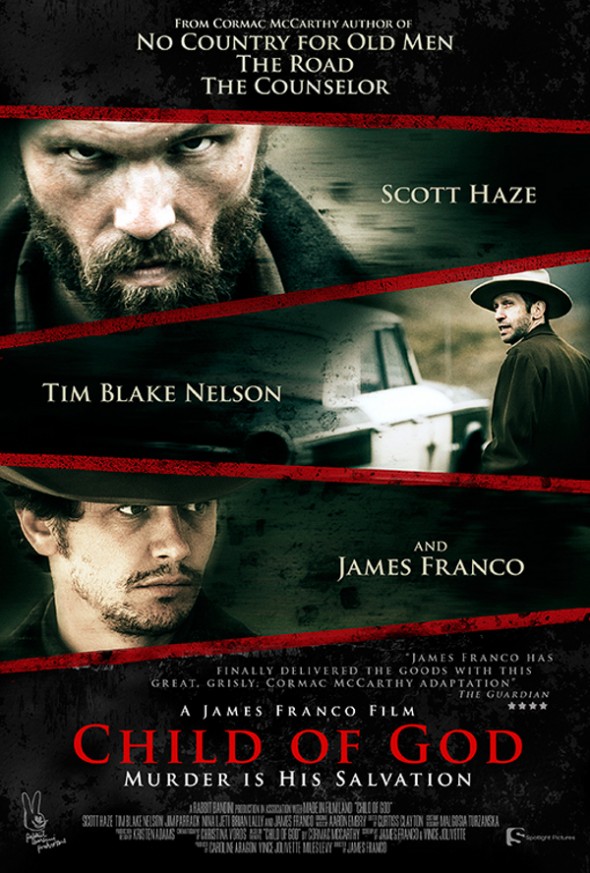 On July 30th, 2014, James Franco’s latest artistic endeavor, a film adaptation of Cormac McCarthy’s 1973 novel, Child of God, premiered at the Tribeca Grand Hotel in New York City.  According to Franco’s Instagram, this is “the best thing [he’s] ever made.”

Set in the foothills of the Appalachian Mountains in the 1960s, McCarthy’s third novel follows the downward spiral of vagabond, Lester Ballard, who’s been exiled from society.  It’s a bleak story about isolation, loneliness, and alienation, but more importantly, it’s about what can happen to an individual who lacks the resources for intimacy and human connection.  Bear in mind, McCarthy also wrote No Country for Old Men, so we can expect for this to be an uneasy screening with excessive amounts of violence and monstrosity.  From the Child of God trailer, Franco’s adaptation seems  to be a deeper exploration of McCarthy’s dark novel; what does a deteriorating man — ” a child of God much like yourself perhaps” —  who lacks the resources for intimacy and human connection really look like?

Scott Haze, who’s worked with Franco on a previous project — a film adaptation of William Faulker’s As I Lay Dying — plays the antagonized protagonist Lester Ballard.  To prepare for the grim role, Haze spent three months in isolation in the woods of Tennessee and lost 45 pounds, while surviving off of apples and fish.

Franco had announced at the 2011 Toronto International Film Festival that he was going to co-write the screenplay with Vince Joliette, and direct the adaptation in West Virginia.  Child of God also features Jim Parrack as Deputy Cotton, Tim Blake Nelson as Sheriff Fate, and of course, Franco himself, as a character named “Jerry.” Child of God will hit select theaters on August 1st, 2014.

Check out our exclusive review of the film below:

This weekend, James Franco’s latest artistic endeavor, a film adaptation of Cormac McCarthy’s horrifying 1973 novel “Child of God” made its public debut in select theaters across the U.S.  The actor/director/writer/painter/student/teacher/selfie superstar, as you can discern, has rightfully earned himself the reputation of being a modern day renaissance man.  So, when he Instagrammed a photo of himself with Scott Haze (the film’s leading actor) at the New York City premiere with a caption that read “this is the best thing I’ve ever made,” it didn’t come as a surprise that so many people anticipated the film’s release.  Not to mention, Child of God is one of McCarthy’s more difficult novels to stomach—the antihero protagonist is a serial necrophile—so adapting this on-screen is nothing short of ambitious.  Franco tackles the project fastidiously, making sure he remains as close to the text as possible, which for Franco, meant laying out some of McCarthy’s prose on the big screen for us to read.  Co-written with Vince Jolivette, who has worked with Franco on a number of films including Palo Alto, As I Lay Dying, Interior. Leather Bar., and Spring Breakers, their re-imagining of McCarthy’s abominable Lester Ballard is impressive, poignant, and fabulously disturbing.

Set in rural Tennessee in the 1960s, the story follows Lester Ballard, a recluse who lives on the outskirts of society, as he descends from being an eccentric but tolerable misfit to devious vagrant to mad man wearing the clothes and scalped hair of the dead girls he eventually hoards.  He roams the woods haphazardly, grunting and snarling and mumbling incomprehensible words.  He lives completely at the mercy of his aloneness, which is more or less what this story is about.  Lester’s incapability of nurturing a human-to-human relationship eventually prompts his killing sprees.  Lester kills for companionship.  It’s the only way he knows how to reconcile his extreme isolation is with inanimate objects: stuffed animals and corpses. 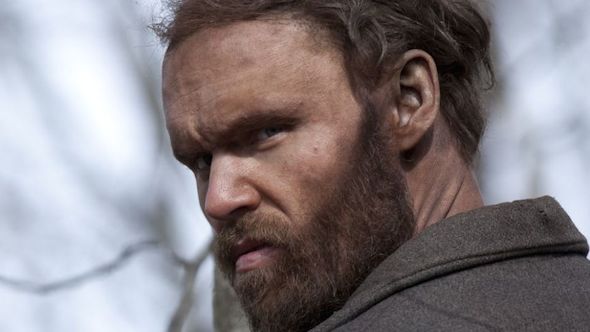 Scott Haze, who has known Franco since their days in acting school, makes an incredible Lester, having prepared for the role by spending three months living alone in the Tennessee woods.  He gallops through the woods like an animal, and pays no attention to the ample amount of saliva and snot that spout from his face.  He looks at the camera with an intensity that is both terrifying and mesmerizing.  Even though we’re repulsed by him masturbating next to a couple having sex in a car, or talking “dirty” to a dead girl that he kidnaps from a car on the side of the road, we can’t keep our eyes off of Haze.  At one point in the film, Lester convinces himself that his stuffed animals are conspiring against him and he shoots them, laughing manically as Franco’s camera hones in on the snot dribbling from his nose.  This scene is the movie’s only deviation from the novel, and it was entirely improvised and shot in one take.  As one of the stronger scenes – if not the strongest – of the film, this is the last moment we see anything human left in Lester.  Betrayed by his only friends, Lester is now utterly alone in the world, and Haze demonstrates that pain and fear with such ferocity, it’s as if he’d had first-hand experience with being an abject outcast. 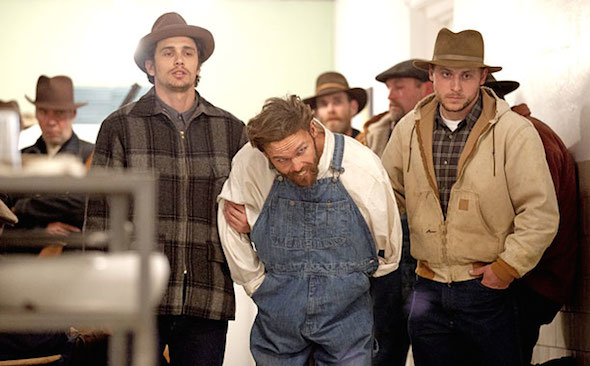 Franco shoots the film as a series of brief scenes that cut-to-black; they are small glimpses of Lester’s life that we’re seeing, as opposed to one long narrative.  This gives the movie a kind of sparse quality that echoes McCarthy’s laconic and pithy prose.  It’s a smart stylistic choice on behalf of Franco, because the brevity doesn’t allow the audience time to digest the obscenity we’re seeing on the screen, and therefore we’re more susceptible to Lester’s pathology.  Franco isn’t asking for us to sympathize with Lester, but he wants us to bear in mind McCarthy’s haunting  introduction of Lester being “a child of God much like yourself perhaps.”  Because underneath the sheer luridness of this tale about alienation and isolation, is in fact, a love story, albeit a terribly deranged one.

On the film’s opening day, Franco did a Q & A with East Village Cinemas, where he discussed what it meant to be loyal to a source when he’s adapting that source for another medium.  “What am I being loyal to in this source?” he rhetorically asked.  “I saw an extreme story and an extreme character who was doing really shocking things.  But underneath those things, I saw someone that was actually very human; his needs were very human. He basically just wants what we all want: intimacy with another being.  And because he is incapable of doing that with a lot of persons, because he’s so strange, he’s such an outsider, he resorts to extreme measures… the killing is a necessity to get friends, to get more people or bodies to be intimate with, because that’s the only way this guy knows how.” 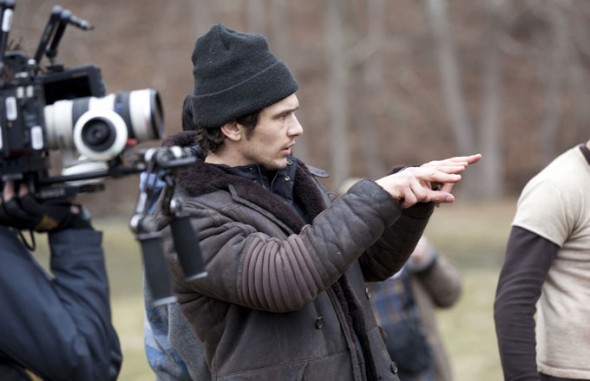 Is this film any good?  I’m not quite sure. McCarthy’s novel is bleak and unapologetic, and Franco seeks to bring the same mood into his own adaptation, which he does so effectively, almost too effectively.  Franco’s adaptation is just too literal.  Although this is a noble quality of the film’s director, it also becomes the film’s shortcoming.  The act of adapting one medium into another one, is an art form in itself, and Franco’s eagerness to re-create an exact replication of McCarthy’s novel is what makes the film unbearably difficult to watch.  While McCarthy had the advantage of a third-person narrator and his brilliant prose to guide us through the more harrowing parts of Lester’s story, Franco has an actor that can’t articulate complete sentences and silent long-panning scenes, which deters the audience from engaging with the narrative.  You’re more likely to catch yourself cringing and wincing rather than absorbing any of the rich existential material that’s found in Lester’s story, which is a shame, really, seeing as Haze’s performance as Lester should earn him an Oscar nomination.

Child of God also features Jim Parrack as Deputy Cotton, Tim Blake Nelson as Sheriff Fate, and Franco as a character in the lynch mob coming after Lester, named “Jerry.”  Child of God is now playing in select theaters in New York, L.A., Chicago, Washington D.C., Tampa, and Dallas. You can watch the trailer below.