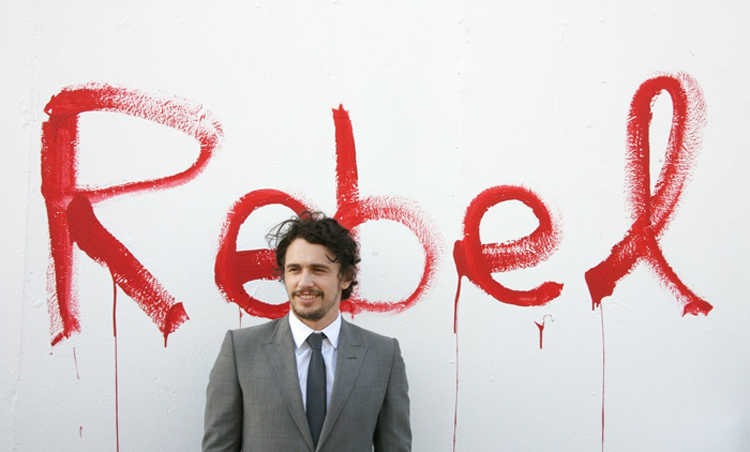 James Franco‘s latest venture into the art world is a site-specific installation/exhibition, in association with L.A.’s MOCA for the Venice Biennale.  The show, called Rebel, is Franco’s homage to the 1955 movie Rebel Without a Cause, starring James Dean. The show contains work from artists such as Douglas Gordon, Harmony Korine, Damon and Paul McCarthy, Ed Ruscha and Aaron Young, all of whom Franco collaborated with on the creation of their pieces.  The exhibition was curated by Dominic Sidhu, who also curated a show of artwork from the film Black Swan. All of the projects in Rebel are currently on display in a pop-up MOCA location, a Hollywood warehouse owned by antiques dealer J.F. Chen, and sponsored by Gucci, 7 for all Mankind, and Chateau Marmont.  The show will remain up until June 2, when the entire exhibit will be moved to the Venice Biennale. In Italy, Rebel will be displayed on the island of Certosa, accessible only by boat from the main island where the Venice Biennale is held, and will run from June through the fall. OHWOW will also be publishing a book about the exhibition with an essay by Francisco J. Ricardo. 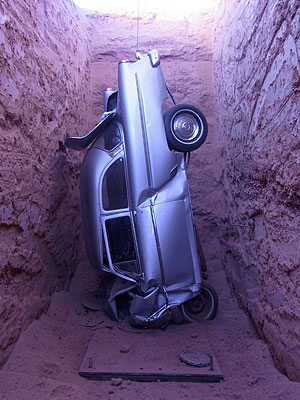 Rebel is a meditation on the themes of Hollywood, masculinity, and self-destruction as encapsulated in the film icon James Dean. As MOCA puts it, the show is a prism “fracturing the themes and events housed within the original film and reframing them in an unresolved conceptual amalgam.” As for the physical manifestation of the exhibit, the room is set up like a series of movie or TV stage sets, each showcasing a different artist, strewn with blow-up sex dolls, plastic ivy and featuring a recreation of the neon sign for Cheateau Marmont.  Douglas Grodon created a two-channel film on method acting with Dennis Hopper’s son, actor Henry Hopper, Terry Richardson photographed Franco in various drag costumes, and Galen Pehrson used Franco’s voice in his pornographic animation El Gato. Harmony Korine reinterpreted the famous Rebel Without a Cause switchblade scene using female gangs, led me Franco and Eddie Peel, armed with machetes. Aaron Young’s piece involved an oval swimming pool with a white motorcycle sunk in the bottom, complete with lawn chairs where viewers could sit while watching the projected footage of a 1950 Ford being dropped in slow motion on repeat.  Paul and Damon McCarthy created a faux-documentary, called Rebel Dabble Dabble, that shows the behind-the-scenes making of the original Rebel Without a Cause, featuring Franco as James Dean.  This isn’t Franco’s first time taking on Dean’s persona, the actor also played him in a 2001 TV biopic for TNT, winning a Golden Globe for his performance.  In addition to his participation in the other pieces, Franco also made a video and series of photographs for the exhibit in honor of his late friend, actor Brad Renfro, who overdosed on heroin in 2008 at the age of 25.  In the photographs and video Franco carves his friend’s name into his arm with a switchblade. He also included an assortment of his drawings and scrawled musings scattered throughout the exhibit. Franco was inspired by the 50th anniversary of Dean’s death, trying to think of an unconventional way to celebrate the actor.  Franco said, “Not just his character but the legends, which are just as powerful as the facts of his life. I kept thinking: What more could I do?” The resulting Rebel is an artistic examination of James Dean that both honors the reality and the mythology of the man, as it totally deconstructs it.