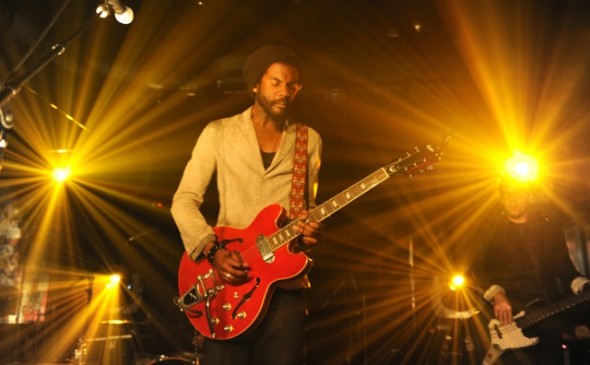 John Varvatos marks five years since the doors opened at the John Varvatos Bowery store in New York City – a space that formerly housed the seminal underground music club CBGB’s. Varvatos has paid tribute to the musical heritage of this legendary site since April 2008, which dovetails with his personal passion for rock & roll that is often expressed in his acclaimed menswear collections. Over the past five years, John Varvatos has hosted numerous notable live music performances by Guns N’ Roses, The Roots, Paul Weller, ZZ Top, Black Rebel Motorcycle Club, Joan Jett, Perry Farrell, Alice Cooper, Peter Frampton, and most recently The Wallflowers.

On the heels of his major label debut solo album ―Blak And Blu, Gary Clark Jr. will headline an exclusive live rock/blues performance at the 5th anniversary event of John Varvatos Bowery NYC. Acclaimed by fans, legendary musicians (The Rolling Stones, BB King, Eric Clapton) and countless critics such as Rolling Stone, Vanity Fair and The New York Times, Gary is a rising Texas-bred music talent and triple threat (emotive singer, involving songwriter, guitar-slinger). ―Gary Clark Jr. is the real deal – amazing guitar player, singer, songwriter and friend,‖ says designer John Varvatos. Gary is 29-years-old and was recently photographed by Danny Clinch alongside legendary Led Zeppelin guitarist Jimmy Page in the current John Varvatos Spring 2013 brand campaign. Gary notes that “it was an honor to work with John Varvatos on his new campaign and I’m excited to perform my new set at the 5th anniversary of his Bowery store.

The night kicks off with the buzz worthy opening act, Vintage Trouble. Currently on a world-tour (with The Who) in support of their debut album, Vintage Trouble has been captivating concert-goers with a sound The New York Times says “Like Otis Redding, Vintage Trouble makes music that is a little bit of everything…You can slow dance, groove, rock and let it all go.” The band’s undeniable power and unforgettable live show has been captured on The Late Show with David Letterman, The Tonight Show with Jay Leno, Jimmy Kimmel Live! and Conan. ―I have watched John Varvatos create a piping-hot marriage between fashion and music for so many years. Vintage Trouble is excited and honored to be part of anything that celebrates this legendary designer, his passion and his vision,‖ says Ty Taylor, lead singer of Vintage Trouble. 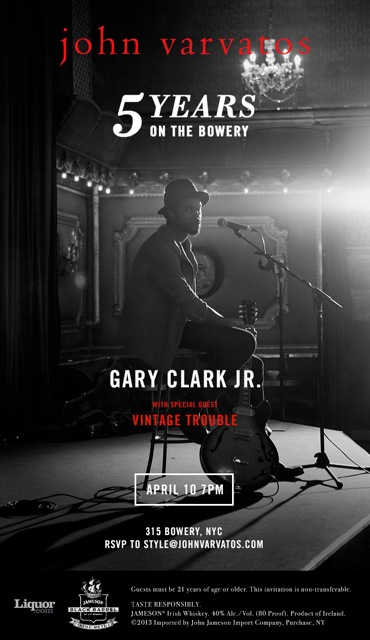 The 3,300 square foot Bowery space had been sitting virtually empty nearly two years prior to being turned over to Varvatos, save the four walls, and the choice was made to leave what remained essentially intact. The footprint of the storefront is relatively unchanged. The awning echoes the shape once known to club goers. Inside, the walls remain untouched and are still inscribed with graffiti and plastered with the original concert posters, stickers and band fliers. The vibe is also familiar, with a black ceiling and atypical theatrical lighting creating a dark, moody environment.

An enthused John Varvatos reveals, ―The space has such an amazing history and over the last five years, we have continued to make this store a cultural experience for all rock music lovers. We host free concerts for both emerging and established bands. I am proud because we’ve kept the tradition alive and have stayed true to what we originally set out to do. CBGB’s was a unique arena for the music scene and this store will continue to be the same for fashion and rock & roll.

As with every Varvatos-curated space, furnishings and fixtures are largely found objects and vintage pieces that exhibit a distinct character and the patina of authenticity. A reclaimed 25-foot mahogany bar sits in front of four majestic antique stained glass windows. Vintage rolling racks hold the Varvatos clothing collections, augmented by a carefully sourced selection of vintage denim, leather jackets, rock tees, accessories and boots. These special pieces have been hand picked in collaboration with the nation’s premier vintage shop, What Comes Around Goes Around. A large table custom designed to Mr. Varvatos’ specifications sits in the center of the store featuring the rock n’ roll inspired handcrafted platinum, gold and silver jewelry.

CBGB OMFUG (Country, Blue Grass and Blues and Other Music For Uplifting Gormandizers) was founded in 1973 and quickly forsook its namesake musical styles to become a forum for rock and punk bands including Blondie, Talking Heads, Television, Patti Smith Group, Richard Hell & the Voidoids, The Ramones, and Green Day. The club closed in October 2006. The final show on its stage was performed by Patti Smith. 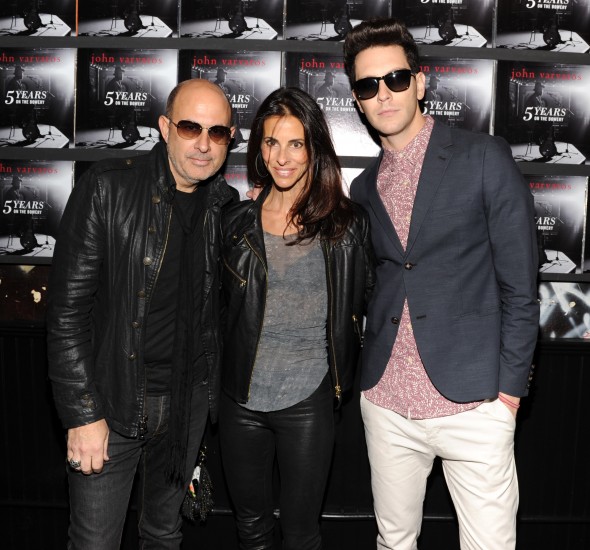