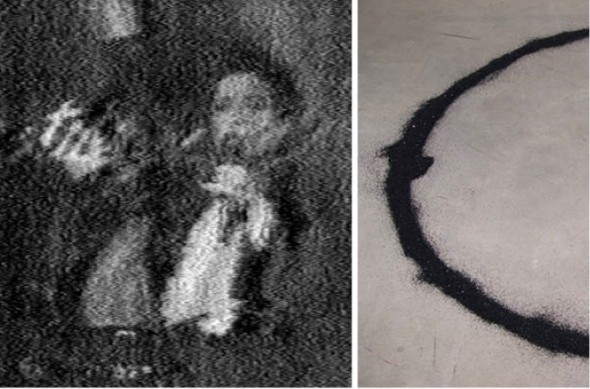 For this show, both Kilimnik and Gordon will present video installations addressing the nature of performance, its definition and its influence. Kilimnik’s ‘Bananarama Guilty’ considers performance from the vantage point of the spectator, and the dialogue that is created through worldwide broadcast. Using material recorded from a televised concert and interview with the band Bananarama in Monaco, the bad reception causes the video to appear as almost complete static, a blown out cacophony of black and white snow, amplifying the distance between performer and spectator. Through this abstracted fissure, ghosted pop choreography is discernible, the music and band rising from the abyss like the title character in Poe’s “Liegeia.” As soon as a fleeting grasp of the material begins to emerge, the video abruptly cuts to more legible footage of Madonna’s Hollywood star-turn “Desperately Seeking Susan” and early ’90s MTV fashion weekly “House of Style.” As the video cuts back to Bananarama, the lyrics to the song appear- “‘Cause I’m guilty – guilty – guilty as a girl can be… only youuu can set me free.”

Gordon’s “Proposal for a Dance”, involving 2 performers, 2 electric guitars and 2 Rodarte Dresses, is a gesture towards anti-pop with all that it implies regarding “the female body”. The piece addresses the audience directly, implicating them in a consideration of an aggressive woman’s body enveloped and projecting the cacophony of sound. The squalling and looping, relentless dissonance defies the audience to interact within the ritualistic scenario. The body movements create the sounds, playing off the notion of the traditional, heroic gestures of the male rock guitarist. Gordon’s other work in the show, “Black Glitter Circle,” is an imagined piece of evidence of the “rock trance.” It signifies a modern type of myth making where the performer is in a state of near possession. The shape is made to represent the circumference of the performer’s arms “in-spin”, in this case Gordon’s. Gordon’s also will show a performative wall painting using stockings as the paintbrush, the gestural markings from a body unseen.