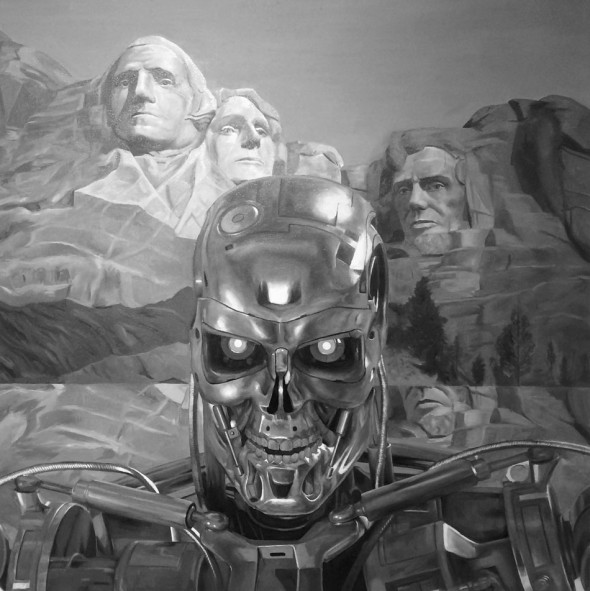 The Hole Gallery will hold their first solo show by artist KATSU: Remember the Future. KATSU has participated in thematic group exhibitions in the gallery the past year that have focused on new ways to use technology in painting; however, this January, he stretches out to fill the entire main space with conceptual works in new media. In Remember the Future, KATSU exhibits many diverse pieces—including the Drone paintings he pioneered—that all look at how humans interact with the tools they have created.

In what are his most well-known type of paintings—enamel spattered canvases painted by drone—KATSU begins his exploration of how art making is affected by cultural shifts in the digital age. With the analog world disappearing and digital imaging stamping out most other ways of making something to look at, the artist takes traditional subjects in oil painting, landscape and portrait, to weird new places with the intermediation of a drone. The “artist’s hand” is now fingers on a remote control and “gesture” is now the weight-sensitive motion of the airplane correcting itself as its paint payload is deployed. One wall of the exhibition is covered with drone-painted “Marilyns”, the artist’s interpretation of the iconic blonde and equally iconic Warhol portrait of her. The slippages of the silkscreen’s raster are updated here to be the errors of remote control or fluctuations in the Quadracopter’s stabilization systems.

Other groups of works in the show also deal with the mediation of technology in image making: the show will include 3D printed handguns, whose candy colored toy-like charm belies their terrifying implications; in an update of the infamous work by Vito Acconci masturbating under the gallery floor, KATSU will install a Grand Theft Auto piece where the artist is playing the immersive game live from an undisclosed location during open hours; there are also videos about the imagery involved in waiting for browser pages to load; shit paintings that are meticulous renderings of tech giants in control of more information than the government created from the compromising bio-matter of the artist; and a piece about Vape culture that will erase the whole gallery show intermittently in a puff of smoke.

One final body of work to note is KATSU’s “Android Selfies” where he paints in monochrome oil artificial intelligence taking selfies at global tourist destinations. This triptych is perhaps a culmination of the themes the exhibition explores, such as, what are all the computers going to do with themselves after humanity is gone? Will they reflect on the odd things we did, will they find meaning in them? All works in the show, in a way, could be artworks generated by an artificial intelligence, robots teaching themselves about humanity.

In this show, KATSU explores the bizarre interchange between our influence on technology and its influence on us. He finds inspiration in the slippages between what new tech innovations can do for us and what they unexpectedly do to us. Technology seems to grow exponentially while human understanding, emotion, intelligence, spirituality or capacity in general inches along logarithmically at best. For a nerd hobbyist Shell Man who spends so many hours of the day submerged in video games, robotics or digital imaging, KATSU makes art about the detachment unavoidable in such a mediated existence. Perhaps the soul of the show is the Shell Man video and audio piece, a self-portrait in a way with an empty Tyvec suit blowing ghost-like under a drone in flight.

KATSU is a new media artist who graduated from Parsons and works in Brooklyn, he has had a major impact in the graffiti and hacker communities in the past decade and has had his work featured in group shows at Fondation Cartier and Eyebeam and in media outlets from Wired to CNN.