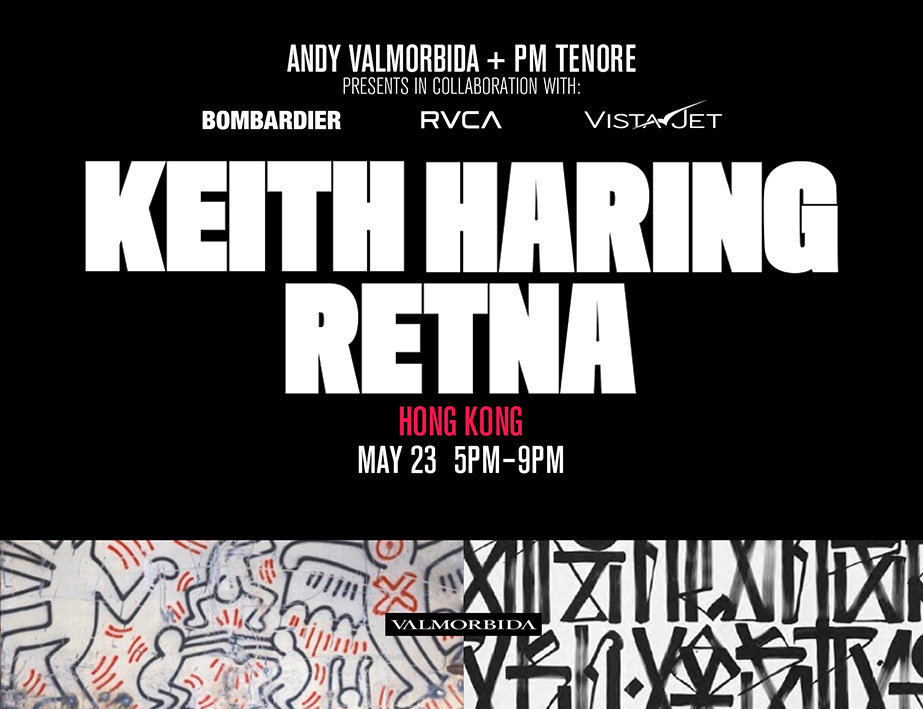 Andy Valmorbida is presenting a one-night exhibition of works by Keith Haring at Central Plaza in Hong Kong on Thursday, May 23. Curated by Nemo Librizzi and Esthella Provas, in collaboration with Bombardier Business Aircraft, RVCA and VistaJet.

Although Keith Haring (1958 – 1990) had a tragically short career, spanning only nine years from 1980 – 1989, he achieved international artistic recognition. Haring’s career grew rapidly from his initial tags on the New York City Subway. At the time of his death, Haring had completed more than fifty public murals (primarily for charities), created animations for the Times Square Spectacolor Billboard, collaborated with major commercial brands including Swatch and Absolute vodka, and opened his own retail space in Soho selling his graphics on T-shirts, toys, posters, buttons, and magnets. During his lifetime, Haring’s work was included in over 100 exhibitions. Most recently his work has been featured in a solo exhibition at The Brooklyn Museum in New York and at the Musee d’Art Moderne de la Ville de Paris in Paris, France.

RETNA (b. 1979) started doing graffiti in 1986. In the late 1990’s, he started to paint on posted advertisements of fashion models. Taking his name from the retina in one’s eye, Retna’s paintings serve to visually capture urban life narrative. He has collaborated with Louis Vuitton, VistaJet, and Nike. His work was included in 2011’s “Art in the Streets” at the Museum of Contemporary Art in Los Angeles, and he was subsequently asked to create a mural for MOCA’s April 2013 Urs Fischer exhibition. MOCA’s museum director, Jeffrey Deitch explained: “What amazed me was how fast and effortless it all seemed. The approach to his work is so internalized that Retna doesn’t have to agonize, and thinking, what do I do next? He just starts in the upper left corner and moves across a surface. The only other artist that I know who was able to do that was Keith Haring.”

Andy Valmorbida is an art entrepreneur and a pioneer of the “pop-up” gallery model. Since 2006, he has created twenty-three pop-up exhibitions in cities around the world including: New York City; Cannes; Los Angeles; London; Milan; Moscow; Florence; Southampton; Miami; and Melbourne, with upcoming exhibitions in Hong Kong, Vienna and Sao Paulo. He is a member of the Serpentine Gallery’s council in London. This is his third exhibition with Retna.

Nemo Librizzi is an artist and filmmaker from New York City. Growing up in a fine art background, his childhood was devoted to tagging subway trains. He knew it was just a matter of time before the art establishment accepted graffiti as an important new phase in the western tradition. Decades later, he saw that the greatest talents of this culture were still being labeled by critics as “graffiti writers” as if it were some criminal accusation. If the movement were to be properly represented, he felt he would have to join in the effort.

Esthella Provas is an art advisor and principal of Esthella Provas and Associates Art Advisory Services. A key figure in the contemporary art world for the past twenty years, Esthella has been pivotal in establishing the Jumex Foundation for collector Eugenio Lopez- one of the largest, most comprehensive, art collections and privately owned museums, in the world. She is also a co-founder of the Latin American International Art Council for MOCA. She currently acts as a Development Consultant for LACMA’s Latin American Initiatives, is on the Modern and Contemporary Art Council, and is a member of the Director’s Circle, while also acting as chair of LA>