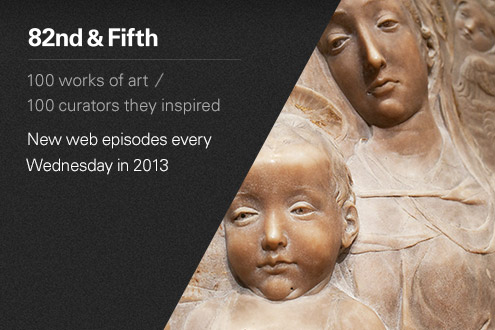 The Metropolitan Museum of Art launched today a new web series, 82nd & Fifth, in which 100 curators from across the Museum talk about 100 works of art from the Met’s collection that changed the way they see the world—one work, one curator, two minutes at a time. Eleven Museum photographers interpret the curators’ audio commentaries visually.

82nd & Fifth is the Met’s address in New York City and also an intersection of art and ideas. Each episode includes “Watch,” a two-minute audio and visual essay with a curator and a work of art he or she finds transformative; and “Explore,” an interactive feature that invites the visitor to get closer to the work of art on his or her own.

At launch today, January 31, 2013, six episodes are posted online and will be followed by two episodes weekly — every Wednesday at 11:00 a.m. — through December 25.

PRIME OF LIFE by Alisa LaGamma

WINNERS AND LOSERS by Xavier Salomon