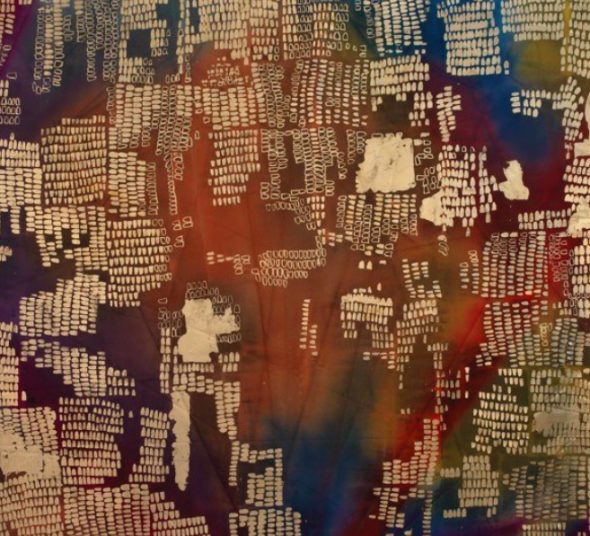 The Breeder is pleased to present Mindy Shapero’s new exhibition “Blinded by the light” hosted in the gallery from the 7th of April 2012 to the 2nd of June 2012. The exhibition will be introducing sculptures, objects and large paper works giving a manifold outlook on Shapero’s onerous latest creations.
All of her works rotate around a complex mythology she herself created in the last decade. By drawing upon the homonymous Bruce Springsteen song for the title of the exhibition Shapero propositions a narrative intention, a vade mecum for the spectator to follow. “Blinded by the light” is an imaginary object central to Shapero’s mythology, a talisman so powerful that one goes instantly blind when looking at it with both eyes. The only rescue is to resist the magnetic urge to look at it or to approach it with an eye patch.
The ground floor of the exhibition intends to exteriorize the inside of the blinded by the light and to render it visible to the spectator. The sculptures are essentially images of what certain stages can look like from the blinded by the light’s perspective. The drawings are black holes or explosions, psychedelic depictions of the chaos raging inside the inner eye.
In the basement the narrative evolves towards the deeper core of the blinded by the light. According to the artist’s mythology colours have to be used all together in order to avoid a certain hierarchy. At the same time all colours together equal no colour at all, that is: black and white. In this part of the exhibition bright colours tend to vanish and make room for bleaker tones. As one descends deeper in the inner body, everything becomes more black until darkness sets in.
However, Shapero’s narrative statement is not completely linear. Here and there touches of rainbow colour break up the austere black and white and drawings and sculptures are inevitably tied together in a sort of continuous multi-layered game. Thus drawings are created with the negatives recycled out of the paper used in the sculptures. In a similar way the sculptures shine through the light holes in the drawings and glow from within having their painted insides and undersides shine colourfully, as to give a hint of the outside world attempting to break in.
As the artist has stated: “My work is not about thing-ness, it’s not object-orientated; it’s narrative based.” For Shapero the material she works with, often recycled and full of traces relating to the narrative or to precedent artworks, is a necessity to convey the intangible. By shifting constantly between her oneiric eye and reality Shapero charges the empty material with extraordinary meaning, giving us, the viewer, the opportunity to widen our own perspective.
Mindy Shapero lives and works in Los Angeles. Her work has been featured in Like Color in Pictures, Aspen Art Museum, 2007; Diptych: Jockum Nordström and Mindy Shapero, Wexner Center for the Arts, Columbus, 2006;The Uncertainty of Objects and Ideas, Hirshhorn Museum and Sculpture Garden, Washington, 2006; Thing, New Sculpture from LA, Hammer Museum, Los Angeles, 2005. Her work was included in Vitamin 3D, published by Phaidon Press in 2009 and is in numerous public collections, most notably the collection of the Hirschorn museum (Smithsonian) in Washington DC, the collection of Orange County museum of art, Newport beach CA, the collection of Nerman Museum of Contemporary Art, Orange Park, Kansas, Tang Museum, New York and the Rubell Family Collection in Miami.