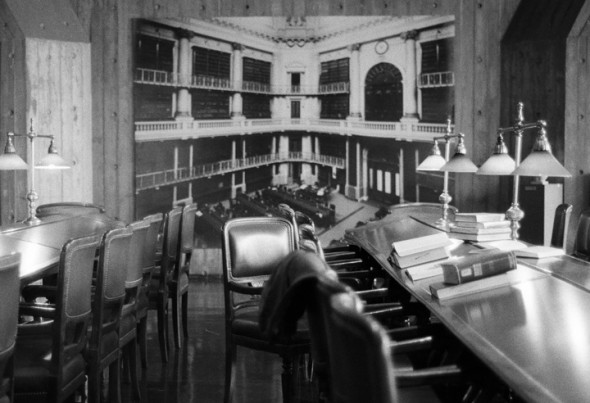 Dutch Brazilian artist Pablo Pijnappel is above all a storyteller. His meta-narratives take shape through the use of analog technologies that encompass 16mm film and slide projections. His work elicits a poetic correspondence between imagery and language, which together evoke the enigmatic. In both Sebastian and Quirijn the protagonists’ cultural, historical and familial identities are conflated through the prism of memory. Pijnappel destabilizes the viewer’s sense of time and subjectivity by enmeshing autobiographical elements and imagined events with literary, filmic, and mythological references.

Prior to filming Sebastian, Pijnappel stumbled upon The Symbology of the Tower of Babel’s Myth, an essay written by the artist’s late grandfather, Brazilian psychoanalyst Dr. Waldredo. The text became a conceptual and narrative framework for Sebastian. In the essay Dr. Walderedo identifies parallels between his patient’s early symptoms of schizophrenia with elements of the symbolism employed in the Tower of Babel.  The essay argues that the biblical destruction and eventual dissemination of language levied by God in response to the Tower’s construction is analogous to the split experienced at the offset of schizophrenia in which individuals gradually lose their comprehension of language and words become detached from their meanings.

Sebastian is comprised of two black and white16mm films projected side by side that aim to illustrate the protagonist’s schizophrenic split. The left projection incorporates audio narration in Spanish and Portuguese with English subtitles, a dual narration that shifts between the Doctor’s observations and the patient’s primary accounts of his own dreams and hallucinations. The projection to the right contains footage shot by Pijnappel in Brazil that slips in and out of direct correspondence with the text while alluding to mythology and the origins of language.

Like Sebastian, Quirijn, a subtitled 16mm color film, exemplifies the portrait of an outsider, albeit a recluse that has consciously removed himself from the hollow promise and monotony of Westernized capitalism.  The narration occurs in the form of letters exchanged by two friends and former art school classmates. Quirijn rejects work in favor of reading and aimless walks around Berlin. The film follows the protagonist through his banal routine, while also functioning as a portrait of a city.

Pablo Pijnappel was born in Paris in 1979.  He attended the Gerrit Rietveld Academy, Amsterdam, NL, which was followed by a scholarship to the Rijksakademie, Amsterdam, NL. His work is currently on view at the 30th São Paulo Biennial, Brazil. In December Malmö Konsthall, SE, will host a solo exhibition of his work. Pijnappel’s work has been exhibited at galleries and institutions throughout Europe and the U.S. that include Whitechapel, London, UK, Stedelijk Museum, Amsterdam, NL and Witte de With, Rotterdam, NL. Pijnappel currently resides in Berlin and Rio.