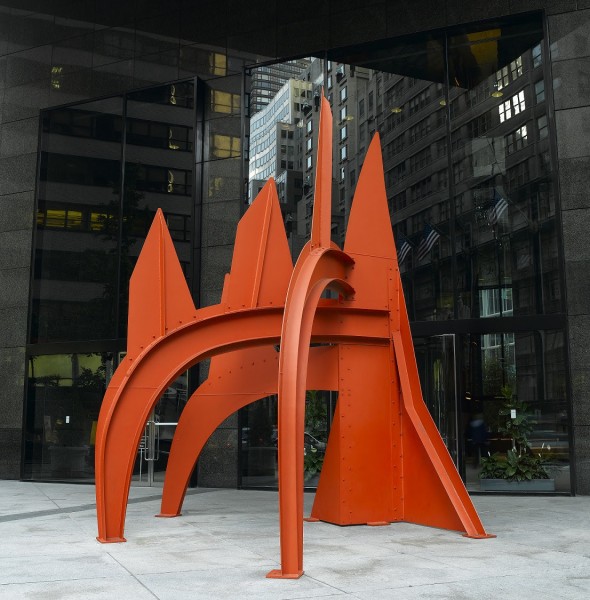 The Pace Gallery in New York,  in collaboration with the Calder Foundation, has announced an exhibit of Alexander Calder’s (1898–1976) work at The Seagram Building, 375 Park Avenue. There will be an installation of three of the artist’s monumental sculptures on the plaza of the iconic International Style building in Midtown. The work will be on view from October 5 through November 10, 2014.

The presentation coincides with Storm King Art Center’s annual gala on October 8, which is honoring the Calder Foundation and Alexander S.C. Rower, the president of the foundation since it was established in 1987 and the artist’s grandson. Storm King Art Center and the Calder Foundation have a longstanding relationship, with the former presenting the artist’s monumental work in its sculpture park for more than 25 years.

Calder, an artist who values public display, is renowned for his invention of the mobile, a kinetic construction of suspended abstract elements that describe individual movements in changing harmony. Calder is known for making outdoor grand scale mobiles and stabiles out of bolted steel plate that can be seen in public cities throughout the world. He believed that his mobiles and stabiles should be useful, designed with purpose and be put in open spaces to serve that purpose.  Calder’s work compliments the Seagram Building, which was designed by Mies van der Rohe, for the two share similar contexts. Built in 1958, the building is a hallmark of modernist architecture and its open plaza, for creating an open urban space was very rare at the time, perfect for the works of Calder.

The sculptures on display represent Calder’s artistic concerns and motifs, specifically his striking use of color and dynamic forms. A standing mobile, “3 Flèches Blanches” (1965) demonstrates Calder’s interest in movement and balance through abstract black-and-white forms. “Angulaire” (1974) is a stabile of jagged metal plates that achieves elegance through its balance of positive and negative space, and was recently on view at the Los Angeles County Museum of Art’s exhibition Calder and Abstraction: From Avant-Garde to Iconic (2013-14). The monumental “Saurien” (1975) stands over eighteen feet tall and was completed the year before the artist’s death. This structure illustrates his bold use of color with its delightful red  limbs and mountain-like ridge.

The exhibit continues Pace’s tradition of presenting Calder’s work in a public setting and marks the first outdoor exhibit of Calder’s work at the Seagram Building since 2007.