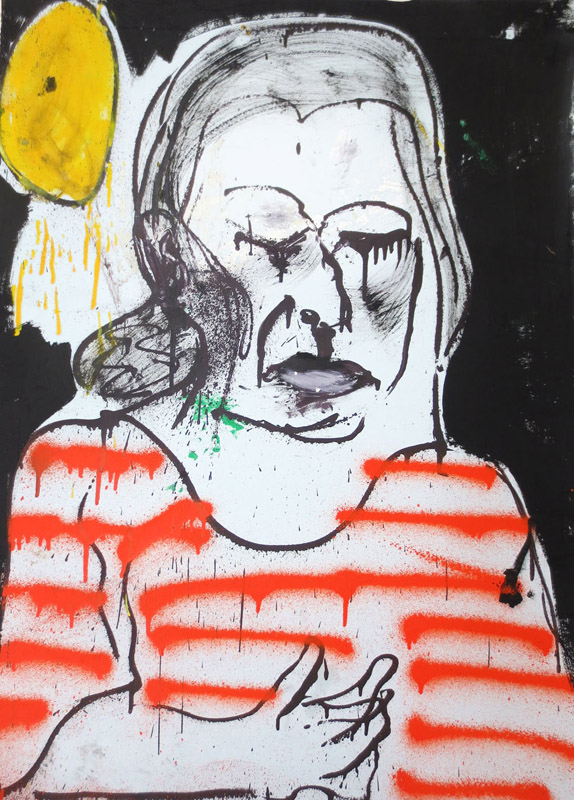 The Hole gallery on the Bowery in downtown Manhattan currently has on display the exhibit “Portrait of a Generation” from now until August 10, featuring the work of over 100 New York artists. The show includes artists such as Yoko Ono, Aurel Schmidt, Cass Bird, Terence Koh, Olivier Zahm, Cynthia Rowley, Dash Snow, Gordon Hull and Ryan McGinley, each of whom painted, drew, or photographed one another to create a series of intimate portraits.  This exhibition is built on a long tradition of iconic artists creating images of their contemporaries, following in the footsteps of luminaries such as Philip Pearlstein, Andy Warhol and Lucian Freud, to name a few. The show is an attempt to attach a collection of image to the faceless community of modern artists that have been attracted to New York as a center of inspiration. By creating interpretive images of the artists themselves the show provides both a literal and aesthetic rolodex of who’s who in the contemporary art world, effectively capturing a new generation of inter-connected artists. The Hole even refers to the catalogue for their exhibition as, “a kind of yearbook for New York City in 2012.”  The curator of the exhibit, The Hole’s director Kathy Grayson, explained her choice of pairings, saying, “Some of them I just paired with their significant other, because that usually brings out a lot of juicy stuff and psychological drama. Then, other artists I paired up thinking, ‘These guys should be friends!’ Then, some artists I paired up thinking, ‘This could produce a fantastic artwork.’ Big group shows like this are a community-building exercise, and I wanted this project to both connect new people and reinforce the creative bonds between existing friends.”

The gallery will simultaneously be hosting “Andréopolis,” the first major solo exhibition of André Saraiva, a graffiti artist featured in Exit Through the Gift Shop and nightlife legend behind Le Baron.