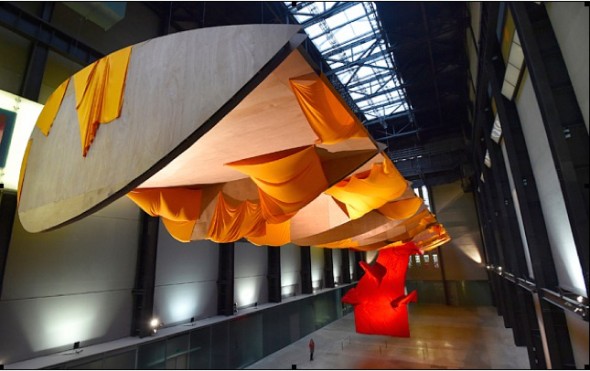 I’ve long been in awe of Richard Tuttle’s works. At first, as a child: I despised his work and my taste instantly went towards Warhol and Koons. But soon, as an adolescent, my heart awoke to the splendors of the finely grained beauties of the world – those dappled rarer things – and my eyes crawled back to Tuttle.

The great minimalist artist came to prominence in the 1960s, with a reputation of combining mediums and bringing mundane everyday objects into his work. In his newest and largest installation to date at the Tate Modern, entitled “I Don’t Know, Or The Weave of Textile Language,” the artist focuses principally on the textile. Though some might think that minimalism is merely a conceptual protest against monumentality in art, it is a multifaceted aesthetic movement. And Tuttle is the greatest case in point. Only Tuttle could redeem a banal material such as textile into art gold. One doesn’t have to be an erudite snob to see the intricate wonders of his fashionings. To see them all together, here at the Tate, assembled not chronologically, but rather, intuitively, will surely make him even more of an iconic figure to the public.

I had a lovely conversation in London when he was opening “I Don’t Know, Or The Weave of Textile Language.” Upon viewing the work, I could hardly believe its stunning majesty. The beautifully colored textile sculptures adorn the Tate’s Turbine Hall, as though they were brought in from the celestial world. Of course, like the tiniest whispers that make up the bulk of Tuttle’s work, there is something of the rare, exquisite, the small. Here, is where we find the small-beautiful and the vast-sublime coming together with integrity.

Leopold Brant: What’s it like shifting gears and making such a large piece?

Richard Tuttle: I think of this piece as a truly new work for the 21st century. Whereas the 20th century subject was so often vapid and flat, this piece has a very rich subject. What’s great is the piece can be seen from many different angles in the space: above, below, longitudinally: it’s more like epic or opera, where you can go a hundred times and have an experience that’s new each time. My work isn’t about size [IE minimalism], it’s about scale, and I’m in support of the individual. Scale is about the individual; size is about the collective. Democracy will support the collective when it is supposed to be supported and the individual when it’s supposed to be supported, but I don’t understand why people confuse the two.

LB: Right, like the great Jacques Tati film Playtime, it’s a different but equally sumptuous experience depending on what seat in the theater you are in. Some people might associate your work with minimalism and conceptualism, as being about ideas and not about visuals or subjectivity. But you don’t see your art in those terms. So, how do you think your art relates to the history of art?

RT: Humans invented art for the experience, but the experience has tended to become degenerated to suit various ideologies. I think society needs a source for the art of experience and right now that source is the individual, and I’m not convinced that is the best source. How I read it, is that society wishes that its own over-soul could be the source for the art, not just the individual. One of the great things about Tate’s Turbine Hall is that you have seven million visitors a year, and you are taking one step in that direction towards the collective over-soul, and my efforts can be handed over to the demos [the people]—I think Pollock is someone who was really trying to do that.

LB: I love Pollock! There was someone who attempted to reach the sort of scale you are talking about – a scale that is not so much about being “big” but feeling expansive – to reach the people, the demos, to encompass them. The people have ceased to strive for epic and opera, which I think is a shame. What do you think of the conceptual tradition coming out of artists like Duchamp?

RT: I pay attention to every molecule if I do a show—from lighting to labels and on and on and on. This is the way that Duchamp was: he was very careful. I think he has been misunderstood in a way that has made him more unattractive. You don’t expect an artist to have all the answers, but his work has been intellectualized in a way that makes it seem he did and makes people forget about his attention to detail.

LB: Since this is an epic work made for and with the demos, how do you conceive of your own authorship?

RT: I was very surprised by how much I learned in doing this piece. And one of the things I was forced to learn is that I can sense where I am coming from before my conception. And my conception as such, really threw a monkey wrench into where I’m actually coming from and what I’m about. It has taken me 70 years to throw off the effect of the monkey wrench. I have faith in the spirit and the spirit is just using the body because it’s okay to, but when it’s not okay, it will find some better situation.

LB: You’ve worked with some very humble materials (most famously rope and cloth), but what do you think of rubbish and waste materials? Who discerns what can or cannot be used as a material for art?

RT: I grew up in the Beat era, and their attitude was ‘I’m going to turn this ashtray upside down and that’s art because I’m an artist.’ I think that’s a very strong and very interesting point and it has to be considered every once in a while. But in my generation there are two types: one who says ‘I’m the first artist in the world and everything I do has to be art’ and then the opposite, which is more of my approach: ‘I think art comes from art.’ There’s a long and very enriching tradition, which the more you know, the more you can achieve. I want better art, so I will do the things I think are going to get results and better art. At the same time, I don’t have the last word—maybe the people who think the opposite way are right. But I am who I am and you can’t make something you’re not. You have to be in order to make.

RT: At the Henri Matisse show at the Museum of Modern Art, there was some work that wouldn’t even be art if it wasn’t for Matisse’s signature. So you know you’re dealing with someone who is trying to construct an entity in the world. Because you have to do stuff subjectively and you have to do stuff in the world, you have to decide which is done where. People are shocked when I say I don’t sign my work. Art for me is something you don’t have to sign. It’s a better signature than any signature you could put on it.

LB: Have you ever thought of doing ready-to-wear Tuttles that anyone could buy?

RT: I made an object for Tate and Whitechapel that’s an edition of 70. But that’s hardly mass production. I do admire design from the 1910s and 20s. There were artists, who the Bauhaus picked up, who thought there should be art in everyone’s house. But I have looked into mass production and the assembly line, which comes from Detroit, and is inspired by the schizophrenic nature of Detroit. I am skeptical of the assembly line, though I’m not skeptical of the schizophrenic nature of life, which I think is wonderful at the individual level, but not when it is turned into mass production. A lot of our world is broken, divided, and I think all the technology and art is separated from the human side. Fortunes have been made by that separation, but maybe we are far enough into the 21st century that we can look back at the 20th century. The thing that stuns me is the genocide. How many people were killed by other people, and nobody has had the courage to actually add it up? Why does 20th century art seem so flat to me? I don’t even sometimes want to look at it. But our art and our humanity are not meant to be separate. I think unity can be great, but I’m not talking about the unity of Zeus, I’m talking about the unity of Athena. I’m part of a generation that really identified with a world that was broken, but you have to know who you are. And you want to put it together to again, like Humpty Dumpty—it’s very human.

LB: What do you think of those who, rather than strive for unity, continually re-perform and re-enact the trauma of brokenness—someone like Warhol?

RT: In American art you have two ways to go: there’s the romantic individual and there’s subordinating the individual to the collective. And our greatest artists are representative of either. Andy was smart enough to try to combine the two: his superstars are connected to the individual, while The Factory is connected to the collective. It comes out in the end like a negative—it’s genius but it’s negative genius. To move forward and to take all value, as much as you can, I think of the beauty of the human soul; it’s better to have that in your heart, and to experience that. And we do need art to point that out to us. When looking back at my work, what holds up is the work that comes from joy—it’s just palpable. That’s hormonal, in part. But you know, young people wearing Goth—that’s very cute. But it’s not cute for someone my age to wear Goth.

LB: It’s great to hear again that the soul is beautiful because I agree, I think it is, and the soul is unified. It’s just that it’s intangible, so it’s hard to notice that. Especially when the material world is so overwhelming, and so impoverished. So we need art to draw us back to that beauty. And yours certainly does the trick.

Richard Tuttle’s installation at the Tate will be up until April 6th, 2015. Click here for more information.

Interview by Leopold Brant for The Untitled Magazine