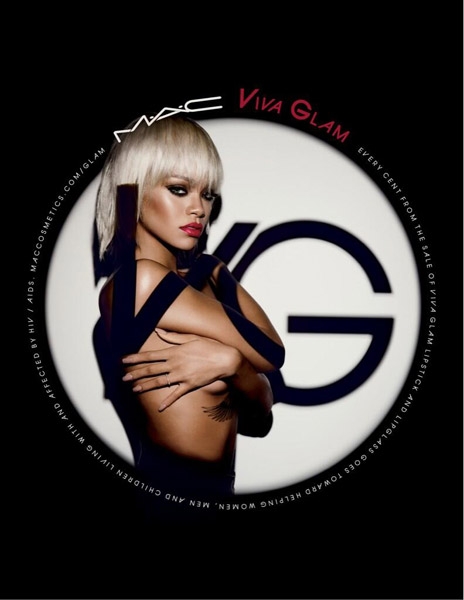 Pop star extraordinaire Rihanna has started this New Year in a big way. First, she took a much-Instagrammed vacation with British model Cara Delevignge to Barbados, which she followed by hosting even more documented New Year’s Eve bash at Jay-Z’s 40/40 Club in Manhattan. And now, just days into 2014, the pop star announced that she is the face of M.A.C.’s new Viva Glam campaign.

Photographer come lifestyle-brand couple Inez van Lamsweerde and Vinoodh Matadin shot the campaign, which is smoldering, to say the least. Inez and Vinoodh recently photographed her for French fashion house Balmain’s spring 2014 campaign, in which she is heavily clothed in denim and hounds tooth stitched with gold chains. Not so, for this makeup shoot. Badgalriri poses bare-chested, covering herself with her own two hands and a projected “VG” atop her bronzed upper half. Makeup designer Val Garland composed her dark, smoky-eyed and red-lipped visage, set under an equally bold platinum blond bob with bangs.

Past spokeswomen for the line include Nicki Minaj, Lady Gaga, Lil’ Kim, Missy Elliott, Eve, Mary J. Blige, Christina Aguilera and Fergie, so Rihanna comes as no surprise. Rihanna and MAC have worked together in the past, first collaborating last February and releasing her first lipstick, RiRi Woo, in May. Since then, she’s released a summer, fall and holiday collection, and as Viva Glam sports outspoken, confident colors, the choice of Rihanna to represent it makes perfect sense. Additionally, Viva Glam proceeds go directly to the MAC AIDS Fund, a grassroots organization that seeks address the epidemic through community outreach. The cause, the singer and the makeup all send their messages loud and clear. The lipstick and lipgloss will be available online Jan. 21 and in stores Jan. 23.