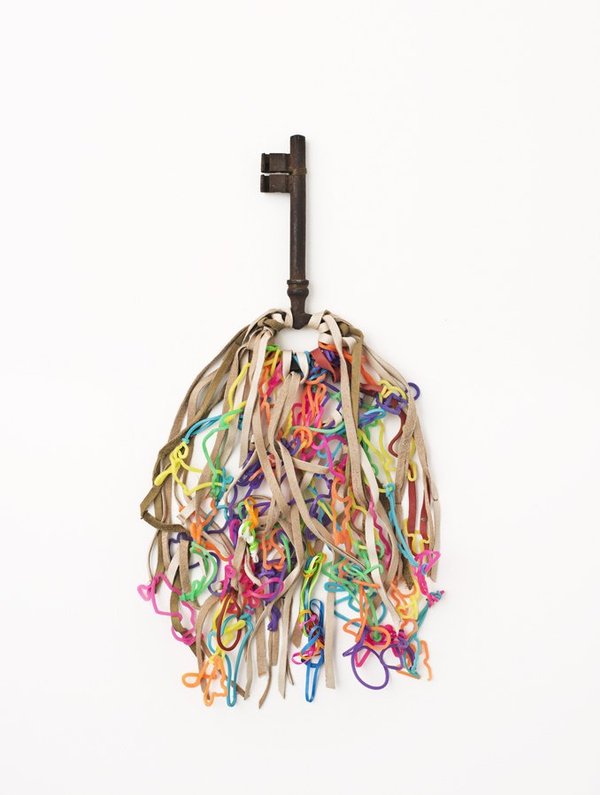 Alison Jacques Gallery is delighted to present Sheila Hicks’s first solo exhibition in the UK. The artist describes her work as ‘unbiased weaves’, a phrase which not only reflects her fascination for language and poetry but her interest in classifications. Crucial components of Hicks’s language include colour with embedded texture, and structure that employs unexpected materials such as recycled and reappointed objects from hospitals, rubber bands and porcupine quills. She fuses ancient textile traditions with the Bauhaus principles of colour, form and scale.

Hicks also holds the firm belief that material be allowed to express its inherent nature. She avoids armatures, preferring to stack and twist her chosen materials: bound ropes, twisted skeins, steel wrapped bundles, intertwined lines of silk and cascading linen. Hicks’s ‘Minimes’, a series of small, complex wall-based works, reflect her memories and observations of places and moments lived; whereas the large-scale monumental sculptures tackle complex architectural contexts often tumbling from ceilings or consuming the spaces in which they inhabit.

In the entrance and main gallery space Hicks will show several new works including Procession Temuco which cascades in a parade of earth-coloured linens: pearl, luminous beige, chestnut brown, rust and deep red. In Cordes Sauvages, wrapped linen chords spring out of a hive in a riot of colours, disobeying any semblance of order, while twisted steel filaments and fractured medallions are woven and captured into the confines of natural linen canvasses in Acier I and II. In contrast to these, Compass Arica is almost sedentary: chalk-white linen bricks are precariously stacked into a huge mound, appearing to be hacked or carved, piled into glacial shapes while a weathered iron compass stands nearby as a sentry measuring time and place. In the second space, Hicks exhibits thirteen ‘Minimes’ indicating the importance of these intimate works, which she has consistently made throughout her practice.

Sheila Hicks (born Hastings, Nebraska in 1934) graduated with a BFA and MFA from Yale University and has lived and worked in Paris since 1964. Recent major exhibitions include the Sao Paulo Biennial curated by Luis Pérez-Oramas (2012) and a touring retrospective ‘Sheila Hicks: 50 Years’, organised by the Addison Gallery, Andover, MA and the Institute of Contemporary Art, Philadelphia (2012). A survey show of the ‘Minimes’ travelled from the U(P)M Museum of Decorative Arts, Prague to Museum Boijmans Van Beuningen (2012). In 2010 Hicks was awarded the Smithsonian Archives of American Art Medal. Her work is currently on show at MoMA, New York as part of the displays from the permanent collection. Other museum acquisitions include Centre Pompidou, Paris; Stedelijk Museum, Amsterdam; Metropolitan Museum, New York; Philadelphia Museum of Art; and the Museum of Fine Arts, Boston.