After weeding out trends for the Spring/Summer 2015 collections from New York Fashion Week and London Fashion Week, there was a trend that got a lot of people talking about the London collections, but was only whispered about in New York. What I’m talking about here is nipples. While sheer to completely transparent fabrics often grace runways, (remember when Charlie Le Mindu opened his Paris S/S 2012 show with a completely nude model?) women being topless isn’t anything novel in Europe. As Diane Von Furstenberg told New York Magazine at the CDFA Awards, earlier this summer, the cut-off age for being topless should be “Forty. Some people more, but after a while, no.” Yet, weeks after Fashion Week, people are still talking about nipples as if they were a trend; as if fashion designers are intentionally sending bare nipples down the runway to endorse the U.S. campaign “Free The Nipple”— a movement against female oppression and censorship that hadn’t been getting any traction until recently.

Here in the states, women’s nipples are still something of a social taboo. Sunbathing on my roof – a relatively private but still public space – friends will still ask me if it’s okay they take their tops off. The idea of freeing your nipple, as a woman, has always been floating around in the conversation of feminism. But it didn’t really come into fruition until Instagram went on a binge-suspension of several women’s Instagram accounts early this year. From models and celebrities to regular women in suburbs and cities around the world, people began re-evaluating the censorship policies of everyone’s favorite photo sharing app.

Soon after Rihanna’s account was suspended in April 2014, for posting a picture of her cover for French Magazine Lui (where her nipples are visible,) Scout Willis (Demi Moore and Bruce Willis’ daughter) took to the streets of New York City, topless. She shared her journey via Twitter, posting a photo of her naked from the waist up, with a caption that read, “Legal in NYC but not on @instagram.” Although it is legal for a woman to be topless in public in New York, there are 37 states where it’s illegal for a woman to be topless (this includes breastfeeding in five of those states). And in Louisiana, a woman can get incarcerated for upwards of three years for exposing a nipple. 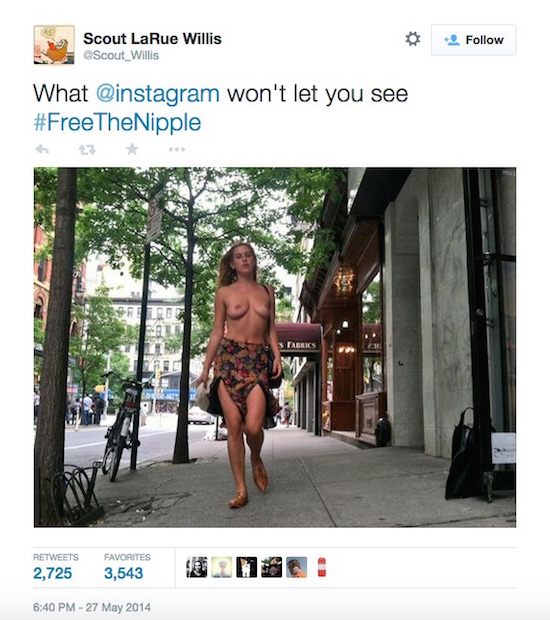 To play devil’s advocate, it is important to think about what kind of social media platform Instagram is. While Twitter boasts an “everything goes” policy, the app isn’t as driven by images as Instagram. And if we’re going to talk about nipples and pictures of nipples, we have to discuss the blurry line between pornography and self-expression, and why an app like Instagram is so concerned about how to monitor the images being shared by its users. But when you compare Instagram’s censorship policy to other image-driven platforms like YouTube and Vimeo, which only prohibit “non-sexual nudity,” you begin to question what Instagram is trying to censor or “protect” you from. 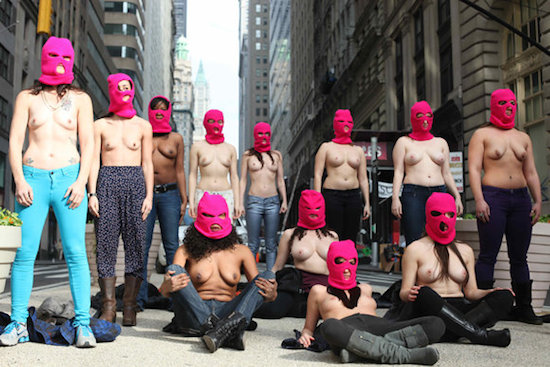 Lina Esco, the writer and director of the Free The Nipple film, is hoping her film will open up a conversation; one that is not just about nipples, but also of gender inequality. I know what you’re thinking: “but wait a minute, women’s nipples have been sexualized for decades and decades, it’s going to take a long time before we can unlearn what society’s polluted our minds with.” The thing is, Esco isn’t advocating all women to parade around their cities topless. Rather, she and a slew of other women are asking us to consider the fundamental inequality that lies at the center of censoring women’s bodies. After all, it was not so long ago, that men weren’t allowed to show their chests freely in the public eye. In 1936, New York became the first state to allow men to walk around topless. This wasn’t achieved, of course, without protests and marches, including the four men who were arrested in the early 30s for wandering around Coney Island without a shirt on. It’s been 80 years since men fought to have their bare chests protected, why can’t we do the same? Why can’t we we be protected under the same rights as our male counterparts? When will women’s nipples no longer be seen as something obscene, explicit, and/or pornographic?

It’s crucial we recognize that this isn’t a movement for mandatory toplessness; this is a movement that believes women should have the right to wear her body however she chooses to—free of fear and shame and all of the other self-loathing feelings we’ve been taught our bodies are.

In a personal essay Esco wrote for The Huffington Post, Esco argues, “Why can you show public beheadings from Saudi Arabia on Facebook, but not a nipple? Why can you sell guns on Instagram, but yet they will suspend your account for posting the most natural part of a woman’s body? As President Eisenhower said, in the era of McCarthy: “The most dangerous weapons of any Tyrant, are not weapons and guns, but censorship.”

It’s a pretty lousy slap in the face to women, to think society is more at ease with sharing viral videos and images of intense violence as opposed to seeing a woman’s bare chest in any form. We can’t forget when American Vogue’s creative director Grace Coddington uploaded her first Instagram picture—an illustrated cartoon of her sitting topless—and had her Instagram temporarily banned. Even a cartoon of a topless woman is deemed more threatening than a beheading that happened in Syria. But the thing is, nudity in art (and fashion) is nothing out of the ordinary. Remember Titian’s “Venus”? Manet’s “Olympia”? The New York Academy of Art hosted an annual art auction and benefit devoted to nude paintings, sculptures, and drawings at Sotheby’s sponsored by MAC Cosmetics this year. Museums and art galleries around the world for centuries have exhibited nudes without anyone batting an eyelash. Nude sculptures have been de rigueur since the beginning of time, and are on view in many public areas pretty much everywhere.  When we consider this fact, the ban on Coddington’s hand-drawn illustration of a naked woman sounds even more ludicrous!

“Free The Nipple” is an ambitious endeavor, and it’s great that so many women are backing the campaign. However, it’s hard to tell–like all trends in fashion–whether or not this’ll be something like a supersaturated fad that will eventually bleed out. In order for “Free The Nipple” to endure and have a lasting effect, society’s attitude towards women’s bodies at large have to change. This campaign is a precarious step towards that social reformation, but hey, it’s a step nonetheless.