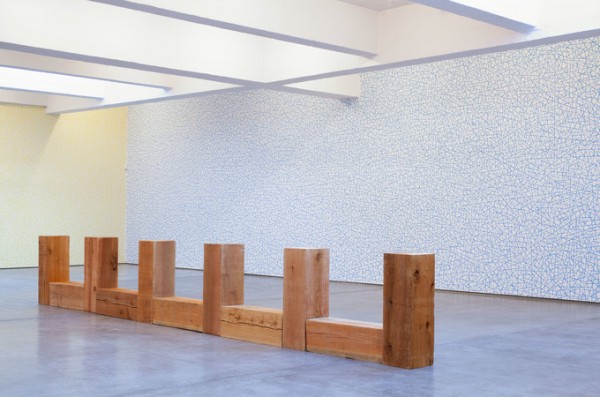 Sol LeWitt’s vibrant Wall Drawing #992 unfolds in three sections, each consisting of 10,000 straight lines drawn in color marker. Red lines appear on the left panel, yellow in the center, and blue on the right. The number of lines derives from a traditional Taoist concept of ten thousand as an emblem of infinity, and indeed, LeWitt’s simple, precise, instructions develop into a mesmerizing arrangement of primary colors. The work’s unique installation across three distinct, and differently-scaled walls, highlights the collaborative relationship between the artist and the installers, in which LeWitt has provided basic instructions, and the draftsmen have determined the length and placement of the lines.

Dan Flavin’s untitled (to V. Mayakovsky) 1, 1987, pays homage to Vladimir Mayakovsky, the Russian futurist poet and playwright who witnessed the Russian revolution and became the voice of his generation’s utopian aspirations. The work recalls the diagonal of May 25, 1963 (to Constantin Brancusi), Flavin’s first work using common fluorescent lightbulbs and which established the diagonal as a critical early visual theme in his artistic oeuvre. Mayakovsky is one of a series shown in 1987 in Chicago, for which the artist used pairs of four-foot lamps in parallel but slightly staggered alignment. The jagged shapes find a natural diagonal determined by placing the edges evenly along the floor.

In 1960, Carl Andre began his Elements series, using identical timbers of equal size in various configurations. This series marks the moment when Andre definitively abandoned the manipulation of materials in favor of the simple yet radical juxtaposition of equivalent units. In his 1979 work, Dracut, on view in this exhibition, the artist uses as his building blocks pre-cut columns of western red cedar, alternating the rectangular units in horizontal and vertical positions. Andre’s interest in timber arose while working as a freight brakeman for the Pennsylvania Railroad. According to the artist, “The railway completely tore me away from the pretensions of art, even my own, and I was back on the horizontal lines of steel and rust and great masses of coal and material, timber, with all kinds of hides and glue and the burdens and weights of the cars themselves.”