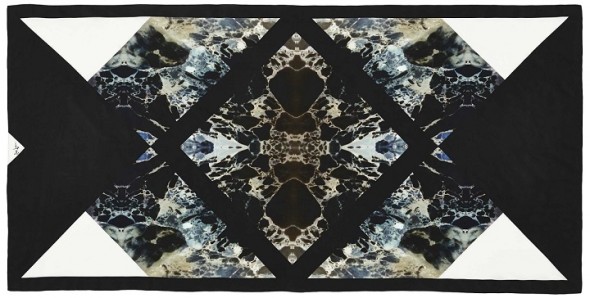 Art and fashion are taken to the next level by St Piece, a new London based design studio, specialising in luxury scarves. Headed by Sandy Chang, St Piece fuses together contemporary art and design aesthetics with age old luxury, thus making them a unique addition to London’s diverse set of sartorial adventurers.

The genesis of St Piece came about fairly quickly, as Sandy explains “It was back in 2012, over Christmas dinner with my now business partner. He had seen my previous work at Alexander McQueen and, looking at the art featured in my portfolio, was completely mesmerised. He knew I was a designer/artist but hadn’t actually seen my work until this point. He expressed how he’d love to wear my artwork as a scarf or T-shirt and we got talking business, deciding to launch the label from 2013. We initially thought it was going to be a small, sideline project but because we are very passionate, particular and specific about the quality and all the little details that differentiate premium and top quality, luxury brands, we both quit our full time jobs in June 2013 to focus full-heartedly on St. Piece.”

In three words Sandy describes a St Piece design as dark, understated, glamour. Although understated is apt, each design has a story and is rich in metaphor, for example the Argus scarf is a celebration of mother earth, inspired by natural elements like rock, marble and crystal. It’s like a kaleidoscope of nature, offset by black and white. A touch of the macabre is also added to the mixture, giving the designs a slightly gothic feel. The Ceto scarf, part of the men’s collection, sees a dystopian future depicted, like a theatrical tableau. Imagining the end of nature caused by mankind above sea level, a giant serpent weaves its way through an amalgam of decaying coral reef and other sea creatures. The story of natures end is explored further in the Artemis scarf, this time featuring varied electronic fauna flying over a pile of historic buildings and manmade gadgets.

Its experimentation that is the key to St Piece gaining so much attention in just over a year, being a varied group of artists, graphic designers and architects; they’re a broad church so to speak, unlike similar studios.

Curiosity from the fashion establishment and public alike is growing every day, for the future Sandy wants St Piece to “grow organically with the aim of building a reputation as one of the leading makers of scarves to emerge from the UK. We are hoping to expand our collection into T-shirts that incorporate our scarf designs as well as select, luxury lifestyle products.”

Until that time, St Piece’ current collection will more than satisfy the needs of a fashion hungry public.

HIGHLIGHTS FROM THE RUNWAYS OF MILAN FASHION WEEK

SARAH JESSICA PARKER FOR NORDSTROM: FIRST LOOK AT THE COLLECTION