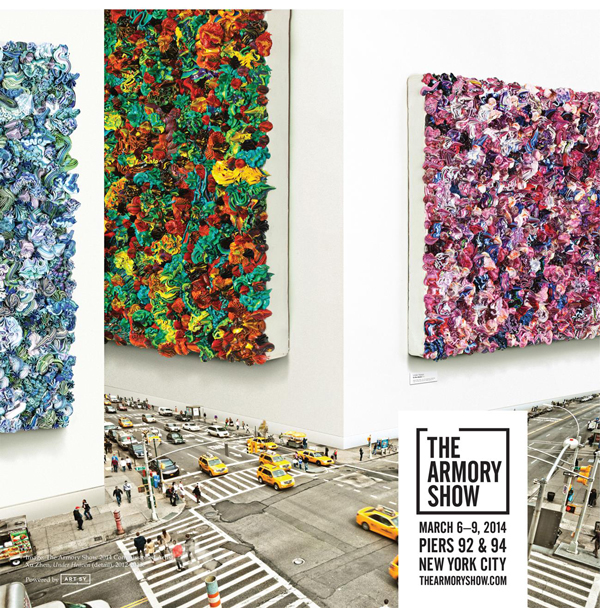 The Armory Show 2014 will host over 200 galleries from 29 countries exhibiting an array of significant modern and contemporary works. The fair will coincide with the opening of the Whitney Biennial, further establishing March in New York as a key moment on the international art world calendar. In line with its mission of providing an intelligent, dynamic platform for emerging and established galleries, The Armory Show will devote a special section of Pier 94 to a curated exhibition of Chinese contemporary art entitled Armory Focus: China. The fair will also launch the inaugural edition of Armory Presents, a new section devoted to solo and dual artist presentations by galleries less than ten years old. In its commitment to connoisseurship, The Armory Show – Modern section has established a formal Selection Committee of leading dealers to help shape museum-quality presentations that touch upon many major movements of the twentieth century.

The Armory Show is New York’s leading fair for modern and contemporary art. A seminal event in the annual New York arts calendar, the fair spearheads Armory Arts Week, a city-wide program of cultural events and exhibitions. As always, the fair will comprise an acclaimed VIP program, a lively opening night benefit party at the Museum of Modern Art and the engaging Open Forum discussion series. Next year’s edition will also coincide with the opening of the 2014 Whitney Biennial in early March, further enhancing the line-up of Armory Arts Week events planned in partnership with New York’s cultural institutions, and attracting a wide scope of international collectors, curators, scholars, and press. For the third year running, the fair will be designed by Brooklyn-based architects Bade Stageberg Cox. Key enhancements include a refined floor plan, a more fluid connection between the Modern and Contemporary Piers, a fresh graphic identity, and improved amenities and dining spots.

The much-anticipated Armory Party will take place Wednesday, March 5 at 8pm. Tickets are available for purchase here. All proceeds benefit the Museum of Modern Art.

FIVE DESIGNERS TO WATCH IN 2014