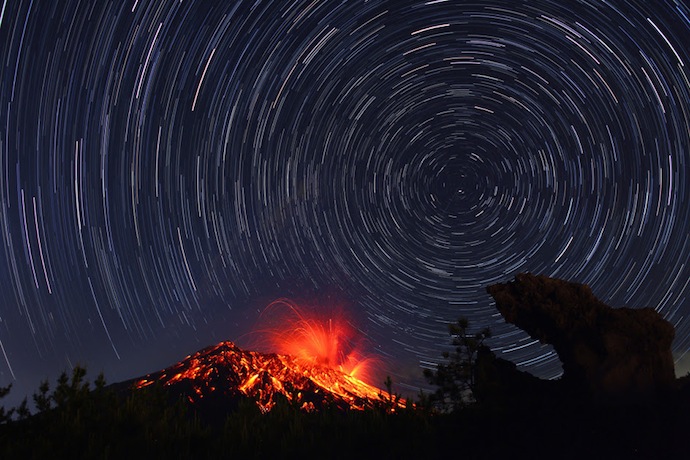 With an Opening Reception on Wednesday, May 28th from 6:00 – 8:00 pm, Steven Kasher Gallery will present a solo exhibition of photographs by Takehito Miyatake, one of Japan’s rising stars in the field of nature photography, and the recently announced Grand Prize Winner of the second Nikkei National Geographic Photo Prize. This marks Miyatake’s first exhibition in the United States. His work follows a rich tradition of Japanese naturalist art.

Takehito Miyatake’s work explores the interplay between what he describes as the “light of Japan” and the natural landscape, and the connection between land, water and sky. His noted series of photographs of the Sakurajima volcano taken while erupting are shown alongside images of tranquil water bays with rocks and boats reminiscent of Japanese scroll paintings, a bridge surrounded by streaks of light produced by the glow of fireflies in flight, a wooded area with bursts of light glowing like lanterns, a moon rising above black lava rock, and a star trail rendered in concentric circles that shows the spinning motion of the Earth.

Miyatake draws inspiration from contemporary waka poet Utsubo Kubota. Waka is a form of classic Japanese literature that traditionally reflects the human heart’s response to nature. Miyatake’s work reveals his passion for his homeland that is still recovering from the devastating Tohoku earthquake and resulting tsunami of 2011. His use of color and light celebrates the mystical beauty of Japan’s landscape.

Takehito Miyatake, born in Osaka, Japan in 1966, graduated from Tokyo Polytechnic University in 1988. While at university, he met and was influenced by the work of the renowned Japanese landscape photographer Yoshikazu Shirakawa. From 1988-1994, Miyatake served as a company photographer at Noritz Steel Machine Company that is located on the Kii Peninsula on the island of Honshū. It was here that Miyatake began photographing the natural world with a 4 x 5 medium format camera focusing on the peninsula’s picturesque water bays. In 1995, Miyatake moved to Tokushima on Shikoku Island where he established the Miyatake Photo Studio and continued to photograph Japan’s beautiful bodies of water. In 2009 Miyatake began shooting Sakurajima, one of the world’s most active volcanoes, and a former island in Kagoshima Prefecture in Kyushu. He was fascinated by the brilliant colors and light generated by the volcano’s frequent explosive and violent eruptions. It is his photographs of Sakurajima that established him as a globally known photographer. His work has been shown in eleven solo and group exhibitions in galleries and museums throughout Japan, and been published in five photo books, most recently Living Earth Sakurajima (PIE International, 2013).