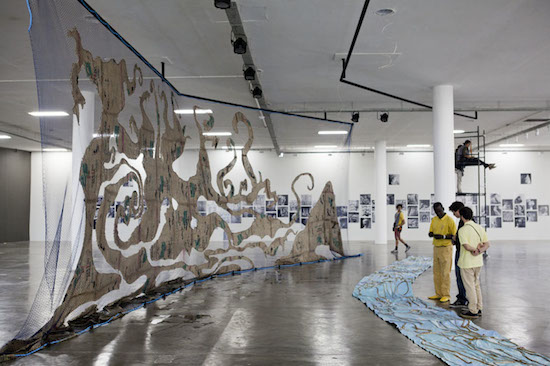 Every two years, São Paulo’s art scene comes together for one of the most important art events in Latin America. The São Paulo Biennial, in its 31st edition, marks the start date for the art calendar in São Paulo with galleries, artists, and curators convening in the country’s cultural center for private dinners, gallery openings, and special events.

Sixty-three years after its inaugural edition in 1951, the São Paulo Biennial continues to surprise and incite its visitors.  Charles Esche curated the show with a team that includes Galit Eilat, Oren Sagiv, Pablo Lafuente and Nuria Enguita Mayo. The exhibition’s title, How to  (…) about things that don’t exist,  invites visitors to fill in the blank for how to talk about, live with, even fight for things that do not exist. The exhibition is a reflection of Brazil’s current mood, with widely protested World Cup games taking place in June and presidential elections next month; inequality, race, and human rights are issues that are difficult to talk about, but are on everyone’s mind. Perhaps the show’s defiance and provocation along with a last minute protest from some of the artists, concerning funds from the Israeli Government, led to a quieter opening and less of a buzz than in previous years.

The Biennial’s curators were focused on the social engagement of the projects rather than the aesthetics and marketability of the works. The result is a Biennial that is not as beautiful or commercial as some may have hoped. Galleries, however, continued to host their events with over 12 openings taking place the weekend before the Biennial preview with big names including Lawrence Weiner, Cildo Meireles, Tunga, Rivane Neuenschwander, and Paulo Bruscky, among others.

In addition to the gallery and museum openings, the French Group Allard organized an exhibition in an early 20th century hospital that had been abandoned for over 20 years. Marc Potier curated the exhibition titled Made by…Feito por Brasileiros. Over 100 artists participated in the exhibition, both Brazilian and international, with site-specific works and installations by renowned artists like Vik Muniz, Kenny Scharf, Tony Oursler, Francesca Woodman, and Iran do Espirito Santo. The artist occupation proved to be quite a crowd pleaser with its labyrinth of rooms and works throughout the historical landmark. 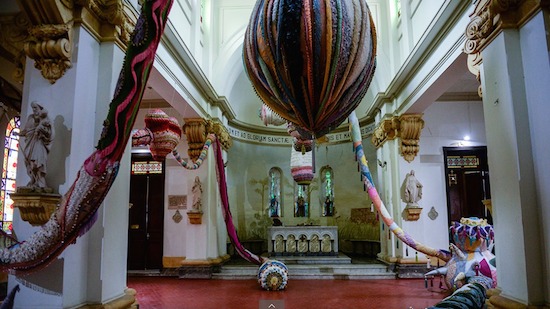 Back in the Biennial, the curators did not shy away from controversy, as they pushed hard to confront issues embedded in the Brazilian psyche. Using photographs of criminals found in local newspapers, the Brazilian artist Éder Oliveira, transforms them into salient paintings. The gigantic murals take on a presence that is impossible to ignore. The bare bodies and vulnerable expressions of the seven young men represent Brazil’s most marginalized. By removing these faces from the small newspapers and placing them in plain view, Oliveira forces people to look at a segment of society we tend to ignore:  the faces of mixed race youths.

In Tension Zone, the artist Hudinilson Jr. explores the boundaries of the human body, gender, and sexuality. The artist’s work includes photocopies of his own body – navel, hands, feet, chest –placed in fragments along the wall, forming a giant composition of hair and body. The partial images of the human body produced over and over create an illusion of multiplicity, rendering it difficult to decipher what or whose body you are looking at. Where one part of the body ends, the next fragment shows an image of an unrelated limb. Removing the face and other identifiers of the body, Hudinilson allows us to enter a judgment free space; free of the perceptions we have about race, gender, or sexual orientations, and where we can revel in the experience of the human body.

The playfulness of illusion and infinity are also evident in Edward Krasinski’s exquisite sculptures, whose aesthetic beauty contrasts with many of the works in the Biennial. Krasinski’s spatial sculptures, made of cable and wood, are beautiful scribbles floating in the air, each one hanging delicately against the dark grey walls. The sculptures produce shadows of new lines and formations on the walls. It is in the shadows and the spontaneity of the sculptures where the elusiveness of what does and does not exist becomes apparent. How do you prove that a shadow exists when there is no light? How can you prove something exists if you cannot see it? Artist Voluspa Jarpa also works with this idea in her politically charged Historical Fragments. The Chilean artist printed hidden CIA documents regarding the Brazilian dictatorship on transparent acrylic sheets. The result is a shower of acrylic and paper documents dangling in front of you, but still completely incomprehensible. By concealing documents, governments can turn a blind eye to human rights violations, while their societies remain ignorant. This was the case between the 1960s-1980s, in which the repressive and violent crimes committed by the dictatorships across Latin America went on publicly unacknowledged by the United States and Latin American governments. 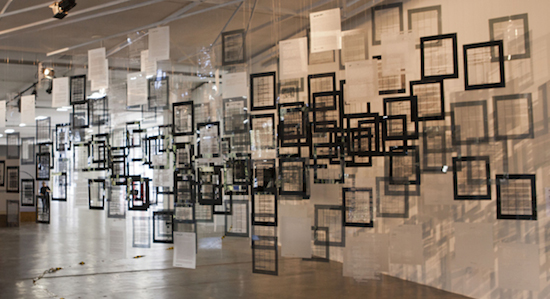 Perhaps the most controversial works in the Biennial are about faith and organized religion. In Errar de Dios, the artist group Etcétera… reworked Leon Ferrari’s exhibition, Palabras Ajenas. In a limbo type room with red curtains and an ominous voice from above, visitors can listen and communicate in the voices of Angela Merkel, God, Goldman Sachs, Monsanto, and São Paulo. Religions and their leaders are similar to politicians in that they have a power over what people believe exists and does not exist; this is the case in Etcétera…’s installation, which also includes an inflammatory petition to Cardinal Jorge Bergoglio—now Pope Francis—to eliminate Hell. In Inferno, Yael Bartana’s version of Hell is a tangible place. The controversial work shows the Brazilian Templo de Salomão. The gigantic church was modeled after the biblical Temple of Solomon, which in its previous two incarnations, was destroyed. Bartana’s film envisions a similar future for the Templo de Salomão where a violent war leaves the church in complete ruins once again. The Israeli artist points to modern society’s shift towards religion as a form of salvation, as well as a form of destruction (given the current international conflicts caused by religious fanaticism and organizations that idolize a place that does not exist).

After contemplating political, religious, sexual, and spatial notions, Mark Lewis’ installation Invention tackles Brazilian modernism. As you reach the top floor, the glass atrium encasing the stairs creates the sensation of being in a different place altogether. The reflections and sharp angles in Lewis’ glass structure contrast starkly with the white concrete of the Biennial pavilion. As videos loop between different settings in São Paulo, it’s evident that Lewis’ installation is about the limitations of modernity. The videos present familiar locations in the city such as the Minhocão, an elevated highway that traverses the city, and a busy subway station. This is not the Brazil that people imagine, with sandy beaches and caipirinhas. The videos reflect the most unpleasant aspects of modernity: the traffic, commute, and ugliness that urban life represents.

The 2014 Biennial is a culmination of ideas, collectives, proposals, and histories. The exhibition opens the possibility of existing in a place where racism, violence, religion and gender issues are acknowledged and dealt with differently. The Biennial’s messages of transgression and controversy could be difficult to swallow for many Paulistas. However, the exhibition presents a rare chance for people to discuss and reflect on topics that our society continues to place on the sidelines. After all, when you think about things that don’t exist, you are allowing yourself to imagine a world of new possibilities.

– By Natacha del Valle for The Untitled Magazine