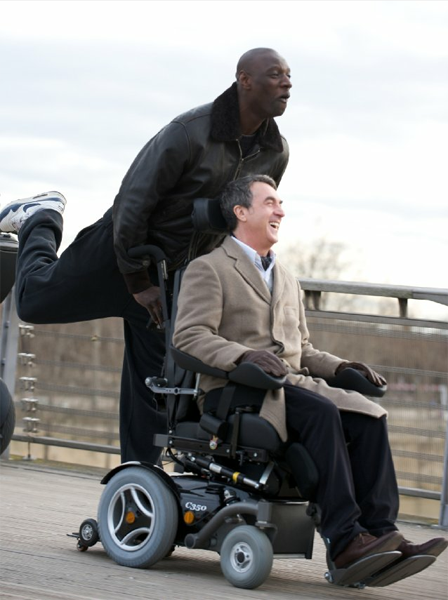 The Intouchables is the French film directed by Olivier Nakache and Éric Toledano that has taken France by storm.  Not only did the film achieve the second highest box office gross of all time in France, but it was voted as the cultural event of 2011 by 52% of the population in a poll by Fnac, Le Parisien, and Europe1. And now this heart-warming movie, based on the true story of Philippe Pozzo di Borgo and Abdel Yasmin Sellou, is set to take on American audiences.

The Intouchables tells the story of the unlikely friendship that develops between Philippe (François Cluzet), a millionaire quadriplegic, and Driss (Omar Sy), the young Senegalese ex-con he hires as a live-in caretaker. Driss interviews for the job with Philippe so that he can get a signature saying he was rejected and continue to receive his welfare benefits.  Philippe is drawn to Driss’s pitiless personality and his ability to care for him without making him feel like a complete invalid who has to be treated delicately. Driss is told to return the next day, and when he arrives at the mansion, after being kicked out of his aunt’s home, he’s informed that he’ll be hired on a trial basis and is shown to his living quarters.  Driss is instantaneously immersed in an incredible world of ridiculous luxury, but along with these niceties comes the dawning realization of just how much care Philippe requires and how much he depends on him for daily assistance.  As time passes, Driss and Philippe slowly grow closer; Philippe brings out the softer, intellectual side of Driss, while Driss allows Philippe to feel as though he has no handicap at all, utilizing the privileges that come with great wealth to live life more fully.  Thanks to Philippe, Driss is exposed to classical music, the opera, and the world of modern art, even comedically venturing to do some of his own paining. Philippe, on the other hand, for the first time after the accident, isn’t being handled with kid gloves and is living life, driving with Driss in his fancy, if impractical, Maserati Quattroporte, smoking cigarettes, and getting a faster engine put on his wheelchair.  Driss even convinces Philippe to contact Eleonore, a woman who Philippe has had a strictly epistolary relationship with up to this point.

The film follows the ups an downs of this unexpected friendship between these two very different men as they push each others limits and test comfort levels, trying to find a common ground of trust.  The Intouchables is simultaneously life-affirming, hilarious, and poignantly sad.  The film manages to tell a story that is interesting, profound, and complex without ever becoming depressive or overly dramatic.  The situation is sad, but much like the approach to life Driss tries to impart on Philippe, the outlook and possibilities are perpetually optimistic.  Even at the worst, there is an upside and something everyone can laugh at.  The levity with which Driss and Philippe handle their respective situations is a lesson and a perspective that everyone should apply to their own lives. It’s rare to see a film that utilizes such a difficult combination of comedy, inspiration, and reality so effectively; it’s no wonder The Intouchables has already gained fans all over the world.