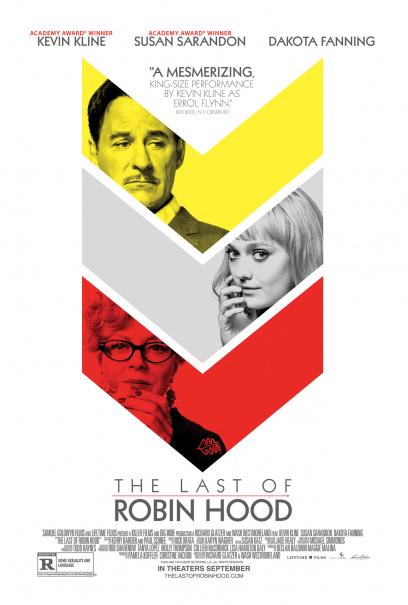 In 1958, Vladimir Nabokov introduced American readers to Humbert Humbert and Dolores Haze, a middle-aged man and his 12-year old nymphet—a couple who would become two of the most controversial characters in 20th century American literature with his famous love story, Lolita. One year before this, in 1957, the swashbuckling Hollywood star, Errol Flynn—known for his roles in Captain Blood, The Sea Hawk, The Adventures of Robin Hood—met who would become the Dolores Haze to his own narrative: 15-year old Beverly Aadland.  Young, impressionable, and under the supervision of her fame-hungry mother, Beverly became Flynn’s muse, lover, and “little companion,” in spite of the 30-year age difference.  By this point in his career, Flynn had already won the heart of Hollywood, as well as a reputation for leading an extremely hedonistic lifestyle filled with booze and young women.  But Flynn’s relationship with Beverly was different.  Beverly was not only his youngest lover, but also his last.  When Flynn died of a heart attack in 1959 and their relationship was exposed, the media hit the jackpot of celebrity scandals.  In Richard Glatzer and Wash Westmoreland’s latest biopic, The Last of Robin Hood, the writers-directors chronicle the sordid relationship between Flynn, Beverly, and her mother Florence, to decipher what became one of the most contentious scandals in the last golden days of 1950s cinema.

Robin Hood opens with a reporter speaking into his recorder.  The date is October 1959.  Errol Flynn (Kevin Kline) has just died, and the reporter, along with swarms of other men in dapper gray suits and recorders, are waiting at an airport in California.  But it’s not Errol’s corpse that they are awaiting, it’s his secret teenage fiancée that no one, aside from their close friends, knew about until his death.

“What were his last words?” they yell at young Beverly (Dakota Fanning) as she steps off the plane. “Did he leave anything for you in his will?  Are you pregnant?”  The camera whizzes around her face—a media tactic we’ve all grown so accustomed to—as if it were searching for something in her expression that would give the reporters a clue about her relationship with the late Errol Flynn.  Beverly shakes her head distressfully as her eyes veer away from the crowd in front of her.  She faints. 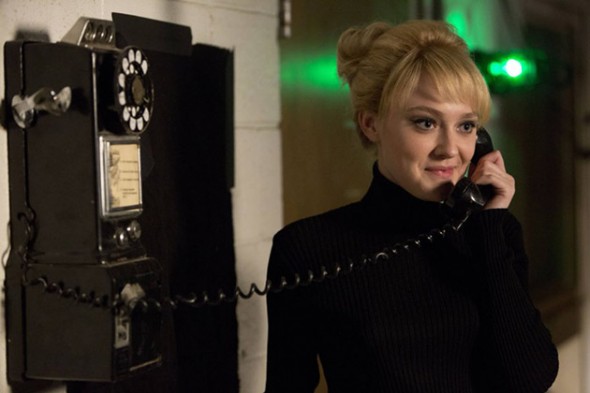 Robin Hood is dedicated to Beverly so it makes sense to begin with Beverly.  But this fact becomes more and more disheartening when the movie unfolds and we realize how helpless her character is.  She drifts from scene to scene with an obedient grin, rarely disagreeing with anyone except with her mother on matters of privacy.  As with all teenagers this age, Beverly isn’t quite sure what she wants from her life.  So she scurries from one dance class to the next, pretending to be eighteen so that she can perform, and indulges her mother’s belief that she was “pre-ordained” for show business.  As she cogently admits to Flynn on their trip to New York, she’s a “wind-up doll.”  Fanning, only 20-years old, plays the part with sympathy for her character.  Given that Beverly is more or less a vessel for which her mother and Flynn can project and contain their desires in, Fanning’s ability to bring Beverly’s life into the character is impressive.

“Does he do this with all the other girls?” she asks the driver who is taking her home after Flynn swipes her virginity.  With big blue unblinking eyes—she isn’t looking at anything in particular—her stiff posture and unmoving expression struggle to conceal the shame she feels.  A tear rolls down her left cheek as she concludes, “Yeah, that’s what I thought.” 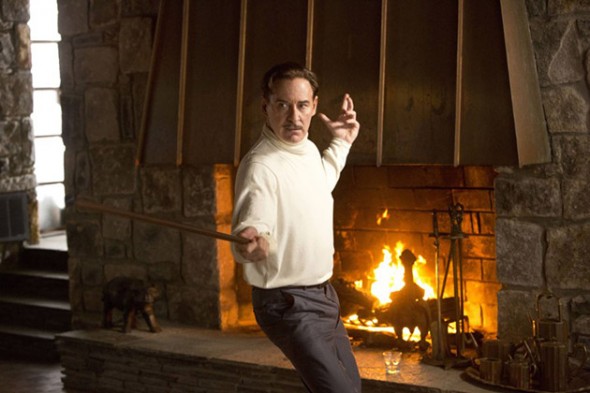 While Beverly lacks agency, her mother and Flynn are the two foil characters that push-and-pull her narrative until Flynn is dead, her mother loses custody, and we’re left with the final shot: an adolescent girl wearing a powder blue dress and white tennis shoes being led down a hallway by a foster care assistant.  This is the final image and it’s an image of Beverly we’d never seen before.  Because she’s dancing around in heels and fabulous mod dresses for most of the film, this is a crass reminder that she was only 15-17 over the course of this story.

Of the few characters we meet and follow, each one feels like an exaggerated archetype, so much that they become caricatures on the screen as opposed to breathing like real human beings do.  Sarandon and Kline, who play Beverly’s mother and Errol Flynn respectively, give phenomenal performances.  But it’s easy to overlook this because their characters are confined to their one-dimensional archetypes: the manipulative stage mom and the aging movie star lothario.  There is neither emotional depth nor character development, and that prevents the narrative from moving forward. 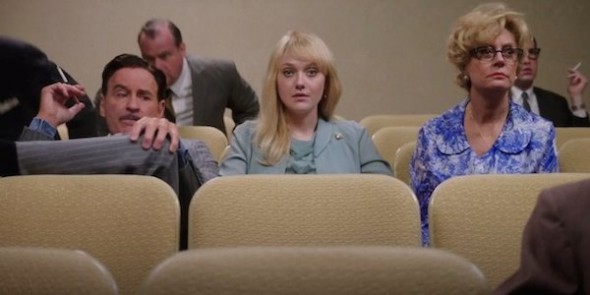 What is this film really about?  Is it about Errol Flynn and Beverly Aadlands?  Or is it about the grim repercussions of pursuing fame?  Is it both?  Could it be both?  Padded with Lolita references, Robin Hood seems to not be so much about exonerating or humanizing Flynn and Beverly’s relationship, but rather, is an exploration of America’s obsession with stardom and the gutter press.  By the end of the film, Beverly loses two of her only companions she’s ever had, and yet her mother continues to urge her daughter to take advantage of being in the spotlight; bad attention is better than no attention, right?  It’s a great angle to tell the story from, because in a way, Glatzer and Westmoreland can avoid passing judgment on the characters of their film.

Robin Hood is visually enchanting, entertaining, and full of beautiful costumes and charming one-liners; it’s a light-hearted and fun movie, which at times, is what makes it difficult to find the film’s focal point.  The tale behind Errol Flynn’s affair with Beverly Aadland is a compelling one, and the film is a reminder of how deeply celebrities and fame are embedded in the American ethos.  Just as Flynn says in the movie, “Fame is like a religion in this godless country.”

The Last of Robin Hood premiered at the 2013 Toronto International Film Festival and will hit US theaters August 29, 2014.