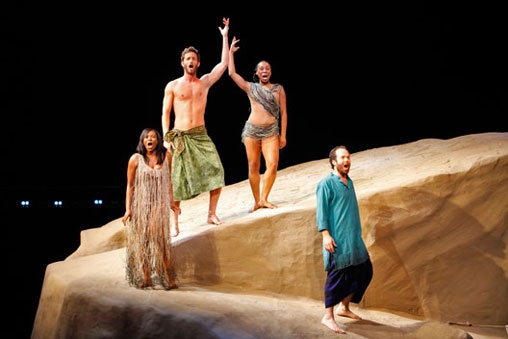 The Tempest Songbook will be performed in The Grace Rainey Rogers Auditorium at The Metropolitan Museum of Art, with three performances from March 27 – 29, 2015. A museum isn’t the first place most companies would think of to stage an opera production, but in recent years, Gotham Chamber Opera has been recognized as a pioneer in creating opera productions in alternative venues, beginning in 2010 with its production of Haydn’s Il mondo della luna at the Hayden Planetarium. The production at the Met will explore the themes of William Shakespeare’s The Tempest through dance, movement and song. The singers and dancers will express the words and actions of various characters, resulting in a lyrical vision of Shakespeare’s play. The production is also notable for the video creation of celebrated multimedia artist Jean-Baptiste Barrière.

“I am thrilled to be invited to share my vision for The Tempest Songbook with Gotham Chamber Opera,” said director and choreographer Luca Veggetti. “Through my association with Kaija Saariaho, I became acquainted with her Tempest Songbook and her suggested pairings with Purcell, which serves as the starting point for the production.”
“Last season’s production of The Raven, conceived by Luca Veggetti, was a tremendous success,” said Neal Goren, artistic director of Gotham Chamber Opera. “We are eager to embark on another journey led by Luca as we explore his conception of The Tempest Songbook with these fabulous singers and dancers.”
The Tempest Songbook will be conducted by Neal Goren and directed and choreographed by Luca Veggetti, with scenic design by Clifton Taylor and Luca Veggetti, costume design by Peter Speliopoulos, lighting design by Clifton Taylor, and video creation by Jean-Baptiste Barrière; and will feature Jennifer Zetlan, soprano, Thomas Richards, bass-baritone, and dancers from the Graham Company:  Peiju Chien-Pott, Abdiel Jacobsen, Lloyd Mayor, Xiaochuan Xie.

THE MAN FROM U.N.C.L.E. PREVIEW

0
The Untitled Magazine February 20, 2015
No Comments Yet