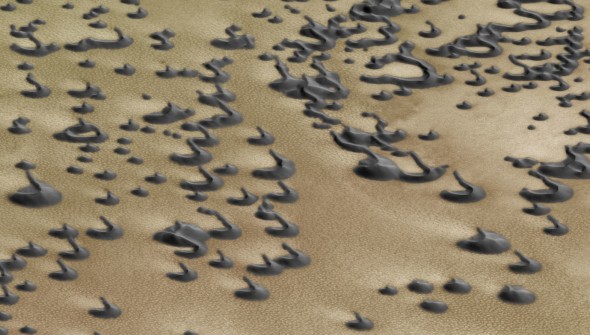 Thomas Ruff returns to Galería Helga de Alvear to present his latest work. Entitled ma.r.s.—an acronym of “mars reconnaissance survey”—one of the leading exponents of the so-called School of Düsseldorf draws from a series begun in 2010 in which he transforms images captured by satellite into large-scale and slightly eerie photographs that convey the sensation of flying over Mars. Although this is not Ruff’s first incursion into the Universe, with ma.r.s. he seems to be completing the photographic sequence of his monumental series jpeg (2004–10) – which is included in the display and can be seen for the first time in Spain – and prints acquired from La Silla Observatory in Chile which resulted in the work Sterne (1992).
Thomas Ruff’s work can be placed within the tradition of German photographers and direct successors of the conceptual aesthetics and teachings of Bernd and Hilla Becher who, in the 1980s, reinterpreted the original project behind the New Objectivity to arrive at a unique way of facing the world. He shares with former classmates of the Kunstakedemie of Düsseldorf Andreas Gursky, Candida Höfer, Axel Hütte and Thomas Struth, in particular, a common conceptual ground: a pertinacious practitioner of the view camera, his neutral and disaffected gaze and his aloof aesthetic make for ‘flat’ and technically perfect images, with a richness of detail, however, that evinces Ruff’s formal preoccupation for nakedness and purity of register.

Under the generic name of the “School of Düsseldorf”, all the above-mentioned artists have reworked the long tradition of genres such as architecture photography and portraiture. Indeed, it is precisely with the latter that Ruff irrupted onto the artistic scene: his faces, enlarged to a crushing scale, revealed the absolute impossibility of connecting with reality through the senses or the emotions, and ultimately exposed the crisis of the scientific paradigm inherited from Positivism and in particular the systematisation implemented by Galton and Bertillon at the end of the 19th century.

After an absence of many years, Ruff now returns to the Galería Helga de Alvear to present his latest work. Entitledma.r.s.—an acronym of “mars reconnaissance survey”—he draws from a series begun in 2010 in which he transforms images captured by satellite into large-scale and slightly eerie photographs that convey the sensation of flying over Mars.

With ma.r.s., Ruff seems to be revisiting his interest in the mysteries of the Universe and the practice of stargazing, assisted by images culled from the European Southern Observatory, in the inhospitable desert of Atacama (La Silla, Chile), and which resulted in Sterne (1992). On this occasion, almost two decades later, he resumes his spatial adventure with the help of NASA’s public internet archives: black-and-white pictograms of the planet Mars are submitted to colour insertion and saturation, yielding novel and markedly fluid textures that offer a fresh perspective of the red planet, somewhat warmer and more introspective than the original icy-cold images.

The exhibition also includes a display of his monumental series jpeg (2004–10), which has never before been seen in Spain. Ruff has drawn on it to explore the distribution and reception of images in the digital era: using as a starting point images obtained from the internet, the photographer has enlarged them massively, exaggerating the patterns of pixels to convert them into geometric forms laden with colour in which the original figures can only be intuited.

Since Thomas Ruff irrupted on the artistic panorama with his large-scale hieratic portraits, his choice of subject matter has clearly changed—from portraits to strange night visions, landmark buildings, constellations of stars, pornographic nudes, re-photographed publicity off the internet, and industrial objects—and he uses digital manipulation to eliminate unwanted detail, but his treatment of the themes remains the same.