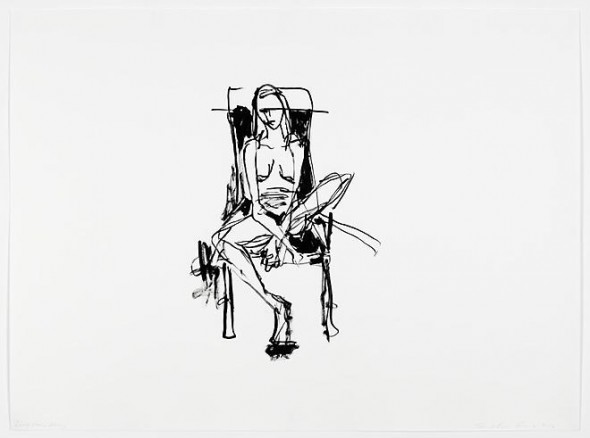 Tracey Emin – I Followed You To The Sun

Lehmann Maupin is honored to present Tracey Emin’s fifth solo show in New York from 2 May to 22 June 2013. Tracey Emin: I Followed You To The Sun is a two-part exhibition featuring over 100 works of art, including a series of new bronze sculptures, paintings and drawings, embroideries, and a short film. Lehmann Maupin has published a special artist monograph on the occasion of the exhibition. The gallery will host a book signing with the artist at 201 Chrystie Street on Wednesday, 1 May from 5 to 7 PM. The following evening, on Thursday, 2 May, Tracey Emin will be present for opening receptions at 540 West 26th Street and 201 Chrystie Street from 6 to 8 PM.

Regarded as one of the world’s most significant contemporary artists, Tracey Emin is internationally recognized for her blunt and revealing style, which elicits a broad range of emotions from shock to empathy to self-reflection. Drawing on personal experiences, Emin often reveals emotional situations with brutal honesty and poetic humor in a wide variety of media including painting, drawing, embroidery, neon, installation, sculpture, and film. This sprawling, two-part exhibition covers all aspects of Emin’s creative output and continues to reveal her most intimate internal narratives.

The centerpiece of Emin’s newest exhibition is a series of seven bronze sculptures that she created over the past year at the Long Island foundry used by Louise Bourgeois, with whom Emin had collaborated before her death in 2010. Each bronze is engraved with the artist’s poetic confessions, and like ancient sarcophagi, are adorned with tiny animal figurines and hand-sculpted human figures.

At 201 Chrystie Street the focus is on a very personal collection of gouache on paper drawings entitled Lonely Chair drawings, which are the primary subject of the accompanying exhibition catalogue. In this series of self-portraits, Emin depicts a solitary female figure in her signature gestural style. The images are drawn from photographs Emin took of herself in France and convey poignant emotions of longing and sadness.

The show will also feature a short film entitled “Love Never Wanted Me.” The film follows a wild fox on the grounds of a secluded estate as Emin narrates a haunting account of the pain associated with fleeting love, saying at one point, “The broken heart is a lonely world and this is the love that I know.”

In December 2013, the Museum of Contemporary Art, North Miami, will present the first solo museum exhibition devoted to Emin’s work in the United States. Curated by Bonnie Clearwater, the Museum’s Executive Director, Angel Without You will focus solely on Emin’s use of neon, a medium that she began utilizing in 1997. Since then, Emin’s illuminated confessions rendered in her personal handwriting have become widely regarded for their poignancy and the universality of her message. This past February, Emin debuted her first public project in New York’s Times Square, as part of Midnight Moment organized by s[edition], the Times Square Advertising Coalition, and Times Square Arts. Each night from 11:57 PM to Midnight, six of her most iconic neon messages were screened on the Times Square Jumbotrons in a silent and moving tribute to love.

Tracey Emin (b. 1963, London) was raised in the seaside town of Margate on the English coast. After leaving school at an early age, Emin enrolled at the Maidstone College of Art, Kent, to study printmaking. She continued her studies at the prestigious Royal College of Arts, London, where she earned a Master’s degree in painting. In 1999, Lehmann Maupin presented Tracey Emin’s first solo exhibition in the United States, Every Part of Me’s Bleeding. Following this critically acclaimed exhibition, Emin exhibited her infamous installation “My Bed” at the Tate Gallery, for which she was shortlisted for the Turner Prize. In 2007, she was chosen to represent Great Britain at the Venice Biennale, becoming the second female artist to ever do so. That same year, Emin was made a Royal Academician and was awarded an Honorary Doctorate from the Royal College of Art, a Doctor of Letters from the University of Kent and a Doctor of Philosophy from London Metropolitan University. In January 2013, Queen Elizabeth II appointed Emin a Commander of the Most Excellent Order of the British Empire for her contributions to the visual arts.

In recent years, Emin has been the subject of a number of retrospective museum exhibitions around the world, including a major solo show at the Museo de Arte Latinoamericano de Buenos Aires, Argentina, which encompassed a collection of her early films (2012); She Lay Down Deep Beneath the Sea, a solo exhibition at Turner Contemporary in her hometown of Margate (2012); and Tracey Emin: 20 Years, the artist’s first retrospective which originated at Scottish National Gallery of Modern Art, Edinburgh (2008), before traveling to the Centro de Arte Contemporáneo, Málaga (2008) and the Kunstmuseum Bern, Switzerland (2009).

The artist lives and works in London, England.