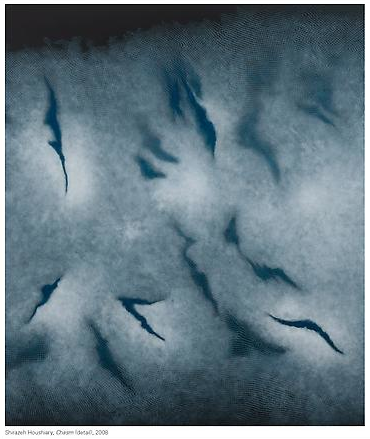 To write could be defined as the action of transferring a word, a thought, an idea, a story, a dream from an undefined state to the fixity of a graphic sign. Writing can be the expression of a gesture (drawing, painting, dripping…), a way to keep a trace of the past (history and memory), an intimate biographical testimony, or a public announcement. It is also the place of several types of contradictions: civilization of sign and that of the image, mystery and clarity, the indecipherable and the revealed, symbolism and meaning. Writing as language is also a central question in the relationships between different cultures and civilizations, particularly Eastern and Western.

Both in the East and West, artists play with their respective alphabets, words and phrases, using writings, imprints, signs and traces. For some of them, art is simply language. Traditionally in China, there is also an idea of equivalence between art and writing. Drawing and painting belong to Chinese language and writing. During the 20th century, the heritage of calligraphy almost disappeared and finally reemerged as a strong artistic expression more than 25 years ago, whether it is used for formal exploration or for social and political criticism.

In Writings Without Borders, artists from very different countries and origins come together with their own approach to writing and the universal themes that relate to it. In many cultures such as Arabic or Chinese, calligraphy is used as a path to meditation and poetry like in Shirazeh Houshiary’s practice of painting, in which she layers calligraphic script until it effectively dissolves into abstraction. Idris Khan also refers to this tradition with his monochrome works stamped repeatedly with words resulting in almost indecipherable layers, fading like traces in our memory.

In her “Night Writing” series, Teresita Fernández references “Ecriture Nocturne,” an early type of encoded writing similar to Braille invented in the early 19th century to help soldiers to communicate in the dark. Engraving the gallery wall with the word ‘moon,’ Hong Kong artist Pak Sheung Chuen reveals the potential of sign as a visual language to reveal unexpected connections when translated from English to Chinese.

Two other artists from the same region share this conceptual approach to writing: Tsang Kin-wah and Zheng Guogu. Using decorative qualities of calligraphy, Tsang Kin-wah combines the beauty of floral ornamentation with crude words spelling out the physical, sexual, and material obsessions of our contemporary world. This concern is echoed in a painting by Zheng Guogu showing scripts of various logos and advertisements with Hong Kong’s famous Pedder Street in the background. The confrontation of words and images is represented in the work of another major artist, Barbara Kruger, who utilizes both to criticize consumer culture and our fascination for mass media.

From the public to the intimate, Indonesian artist Eko Nugroho has based his snapshot embroideries series on the photographs he takes from the streets of a foreign city or at home in his studio as a documentation of his every day life like a personal dairy. The relation between public and private is also tested by Tracey Emin and He An, both of whom use neon writings as a visual poetry to express their emotions. Another form of poetry from the street is present in the works of South African artist Robin Rhode who brings together body and sign in a choreographic gesture.