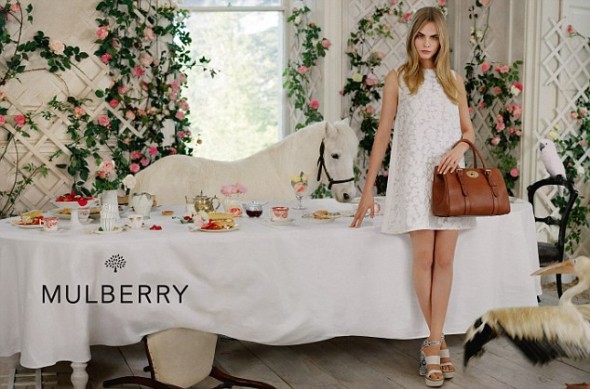 Cara Delevingne has had quite the successful year – she walked the runways for Chanel, Valentino, Fendi, Stella McCartney, Burberry, Oscar de la Renta, Jason Wu and Victoria’s Secret, as well as fronting campaigns for DKNY and La Perla Ladies. The twenty-one year old “it-girl” was both the most-Googled fashion figure of 2013 and the most-blogged-about model on Tumblr, beating out other top models such as Miranda Kerr, Tyra Banks, Kate Moss, Adriana Lima, and Chanel Iman.

Delevingne is now fronting the Spring campaign for Mulberry following her previous Fall campaign for the line. Fashion photographer Tim Walker, known for his breathtaking imagery and aesthetics, shot the campaign. Walker’s longtime set designer Shona Heath and director Ronnie Cooke assisted in the collaboration which took place at the Shotover House in Oxfordshire.

The model posed against a whimsical backdrop with an ark of white ponies, pups and parrots. The fairytale was complete with flower-glazed branches with a literary, British feel – representing the Mulberry brand perfectly. Cara enthusiastically spoke about the prospect of a Mulberry bag being made and named after her, the ‘Cara’ bag.

0
The Untitled Magazine January 7, 2014
No Comments Yet