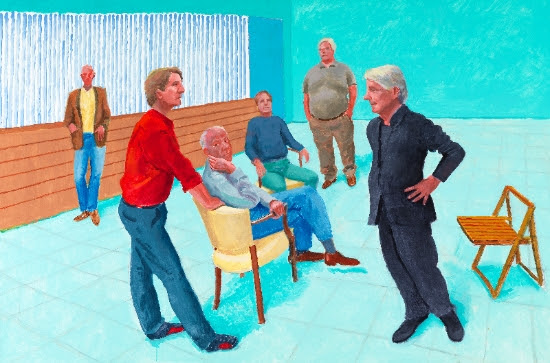 Following the end of The Arrival of Spring, Hockney’s new paintings depicting the human figure will be on display at The Pace Gallery from November 8th through January 10th in an exhibit titled Some New Painting (and Photography). While The Arrival of Spring used iPad drawings and videos to capture the seasonal changes in Woldgate, East Yorkshire, “Some New Painting (and Photography)” will mark a return to a more traditional medium of painting . “I’m quite convinced painting can’t disappear, ” Hockney said, “because there’s nothing to replace it.”

Hockney has worked with almost every media in art, from painting and drawing to photography and printmaking to full-scale opera stagings, incorporating technology such as fax machines, laser photocopiers, computers, video, iPhone and iPad into his tool set. Along with the paintings, this exhibit will also include five photographic drawings, which document some of the paintings, displayed on high definition screens. So Hockney continues to use digital media in his art.

These paintings are the first works completed since his return to Los Angeles, after spending a decade producing art surrounding the East Yorkshire of his childhood. He used live models, friends, colleagues and dancers, moving them around in different positions inside his LA studio, some figures appearing more than once in a painting.

Hockney uses the figures in his painting to create multiple directions of focus within both time and space. Although each one is a representation of a real person, they are less themselves in the paintings as actors for Hockney’s narration. Art historian Kay Heymer wrote that Hockney is “on a continuous journey, his art testifying to what he has seen.”

0
The Untitled Magazine November 3, 2014
No Comments Yet