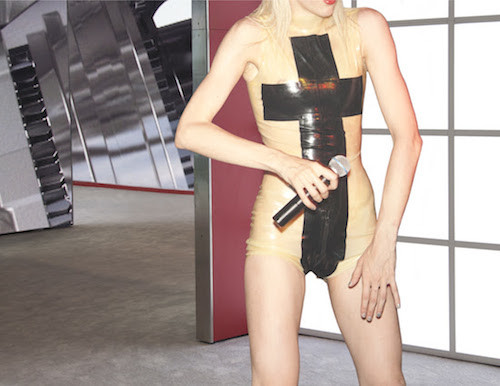 Object-human relationships can be perceived in many different ways. The object can become humanized and fetishized and the human on the other hand, can be objectified. In this show Aimée Burg, Tamar Ettun, and Mónika Sziládi bring their own take on the interdependences between bodies, minds, and the objects surrounding them. The combination of the works in the show explores the charged relationships we have with the objects we use every day; whether in terms of religious, ceremonial, mundane, or psychological interdependencies. The impact of these relationships on our lives ranges from the very physical, through mental and emotional experiences, to metaphysical and spiritual attributes.

Aimée Burg’s comprehensive installation revolves around the notion of rituals, play, and the suspension of time, while incorporating repetitive and meditative tasks using metaphoric objects from everyday life. Her re-interpretation of mundane items utilized in our home, kitchen, and with our family and friends, resemble archeological artifacts that preserve ancient ceremonial events. The installation’s dynamic presence plays with the relevance of “time” by bringing the past into a sci-fi-like future.

In her recent series of works, Tamar Ettun explores the concept of empathy through “neuron mirroring.” Originally defined as “mirror neuron” it refers to a neuron that fires both when an animal acts and when the animal observes the same action performed by another. Her works in the show comprised of sculptures, a video, and photographs, are a reflection of a longer process which traces the correspondence between objects and bodies, as well as sculptures and movement. As she often states, in her works the body becomes sculptural, and the objects, performative.

Through a photographic process Mónika Sziládi creates unique digital collages that are constructed from scenes she shoots at networking events, conventions, and meet-ups of various subcultures that engage through social networks. In her most recent assemblage of works “Left to Our Own Devices,” Sziládi emphasizes moments of the complex psychological exchange we develop with garments, technological devices, costumes and toys, or other people we surround ourselves with.