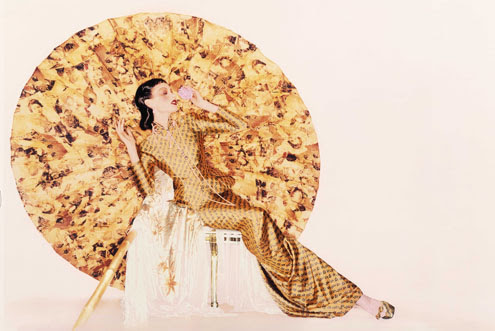 Presented in the Museum’s Chinese Galleries and Anna Wintour Costume Center, the exhibition will explore how China has fueled the creative imagination for centuries, resulting in layers of cultural translations, re-translations, and mistranslations.  In this collaboration between The Costume Institute and the Department of Asian Art, high fashion will be juxtaposed with Chinese costumes, paintings, porcelains, and other art, as well as Chinese films to reveal ongoing dialogues between East and West, past and present. China Through the Looking Glass will feature more than 100 examples of haute couture and avant-garde ready-to-wear alongside Chinese art. Filmic representations of China will be incorporated throughout to reveal how our visions of China are framed by narratives that draw upon popular culture, and also to recognize the importance of cinema as a medium through which we understand the richness of Chinese history.

“I am excited about this partnership between these two forward-thinking departments that will undoubtedly reveal provocative new insights into the West’s fascination with Chinese aesthetics,” said Thomas P. Campbell, Director and CEO of the Met.  “The artistic direction of acclaimed filmmaker Wong Kar Wai will take visitors on a cinematic journey through our galleries, where high fashion will be shown alongside masterworks of Chinese art.”

“From the earliest period of European contact with China in the 16th century, the West has been enchanted with enigmatic objects and imagery from the East, providing inspiration for fashion designers from Paul Poiret to Yves Saint Laurent, whose fashions are infused at every turn with fantasy, romance, and nostalgia,” said Andrew Bolton, Curator in The Costume Institute.  “In an intricate process of translation and mistranslation similar to the game of ‘Telephone’–which the British call ‘Chinese Whispers’–designers conjoin disparate stylistic references into a fantastic pastiche of Chinese aesthetic and cultural traditions.”

The Anna Wintour Costume Center’s Lizzie and Jonathan Tisch Gallery will present a series of “whispers” or conversations through time and space, focusing on Imperial China; Nationalist China, especially Shanghai in the 1920s and 1930s; and Communist China, with an emphasis on changing images of Chairman Mao.  These ‘whispers,’ and others in the exhibition, will be illustrated with scenes from films by such groundbreaking Chinese directors as Zhang Yimou, Chen Kaige, Ang Lee, and Wong Kar Wai.  Distinct vignettes will be devoted to “women of style,” including Madame Wellington Koo, Madame Chiang Kai-shek (Soong May-Ling), and Empress Dowager Cixi.

Directly above the Anna Wintour Costume Center, the Chinese Galleries on the second floor will showcase fashion from the 1700s to the present, juxtaposed with decorative arts from Imperial China, including jade, lacquer, cloisonné, and blue-and-white porcelain, mostly drawn from the Met’s collection.  The Astor Court will feature a thematic vignette dedicated to Chinese opera, focusing on the celebrated performer Mei Lanfang, who inspired John Galliano’s spring 2003 Christian Dior Haute Couture Collection, ensembles from which will be showcased alongside Mr. Mei’s original opera costumes.

In celebration of the exhibition opening, the Museum’s Costume Institute Benefit will take place on Monday, May 4, 2015.  Silas Chou will serve as Honorary Chair.  The evening’s co-chairs will be Jennifer Lawrence, Gong Li, Marissa Mayer, Wendi Murdoch, and Anna Wintour.  This event is The Costume Institute’s main source of annual funding for exhibitions, publications, acquisitions, and capital improvements.  Additional financial support for the 2015 exhibition and benefit is provided by a group of Chinese donors.