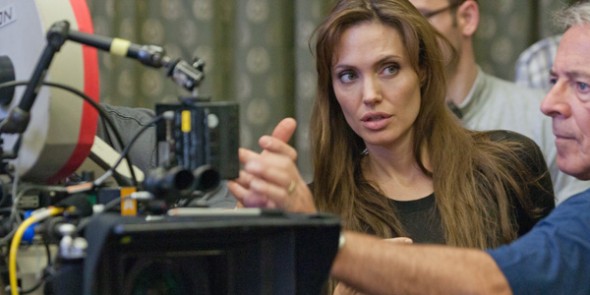 Unbroken marks Angelina Jolie’s third time behind the camera. Much like her previous directorial experiences, her new project brings to light a socially relevant episode in history. An on-screen adaptation of Laura Hillenbrand’s novel, Unbroken: A World War II Story of Survival, Resilence, and Redemption, the story follows the life of Olympic track athlete Louis “Louie” Zamperini, who survived a plane crash in the Pacific, followed by 47 days drifting on a raft. Not to mention his two and a half years living in several Japanese prisoner war camps.

With Unbroken, Jolie has put together an A-list team, both behind and in front of the camera. Behind the camera, she has Joel and Ethan Coen, Richard LaGravenese and William Nicholson as the film’s screenwriters and Roger Deakins as the cinematographer. As for the cast, Zamperini is majestically embodied by Irish actor Jack O’Connell, who co-stars with Japanese rock-star Miyavi (this is Miyayi’s debut as an actor in the role of the sadistic prison guard Mutsushiro Watanabe). Zamperini’s companions in misfortune are played by Garrett Hedlund (John Fitzgerald), Finn Wittrock (Francis ‘Mac’ McManara) and Domnhall Gleeson (Russell Allen ‘Phil’ Philips).

The movie‘s PG 13 rating will allow the younger generation to get in touch with an awe-inspiring person, who persevered through the most horrific adversities given with war. This matter was very much at heart to Angelina Jolie, who explained:

“It was very important, thinking about my older children who are old enough to see it. It’s a movie for everybody. You think about this great generation and the values they had, how they were as men, and I think it’s one that we want to raise our children and remind them of; this sense of family and community and honor and [we can] pay respect to them. I want my children to think about men like Louie, so when they think that all is lost, they know they’ve got something inside of them. Because this is what this story speaks to: it’s in all of us. And you don’t have to be a prefect person, or a saint, or a hero: Louie was very flawed, very human, but made great choices and in the end was a great man.”

Unbroken is slated to open on Christmas Day. It will definitely prove to be the kind of biopic that’ll inspire people, given the contemporary global issues of today, which has spread a feeling of hopelessness. Zamperini’s underdog energy helps us to rely on the power of the human spirit, as Angelina believes:

“Like everybody, we wake up and read the news. We see the events that are around the world, and we are heartened by so much. We feel overwhelmed and we don’t know what’s possible. We want something to hold on to – something that can give us strength. I was half way through this book and I was inspired and on fire. I felt better being reminded of the strength of the human spirit. I realized that if this was his effect on me and [perhaps] other people, then this needed to be put forward into the world. I’m also very happy it’s coming out during the holidays, I think it’s the right time.”

It would have been very easy for Zamperini’s story to have taken on the redundant characteristics of a large commercial film, but Jolie maintains a delicate indie approach to how she tells Zamperini’s epic tale. “We looked at the themes in his life. The Coen brothers told me that when you put the book down, you have a certain feeling and understanding. That’s what you need to feel when you walk out of the theater. So know the themes. One of the great things about the Coen Brothers is that this film could have easily gone sentimental, but we needed to keep it sharp, open, and entertaining for an audience. They are so witty and have such an extraordinary way of communicating in such a clean way, so they were really helpful with the characters’ personalities and the story’s structure.”

The movie is divided into three parts: the first set is on an aircraft where Louis and his battalion are attacked by Japanese aircrafts; the second takes place in the middle of the ocean when Louis, Mac and Phil are stranded on two rafts for almost seven weeks; the third shows Louie’s time in Japanese concentration camps, as the favorite target for Watanabe’s tortures. Every act of the story is visually spectacular and the suspense is harrowing and enthralling, and it’s humbling to hear the director’s vision on the making:

“I came into this because I was drawn to the story and felt it was important. A few years ago I would never imagine making a movie that would include shark attacks and planes crashing, but I cared so much about this story that I had to learn to do all of those things. It’s been such an exciting challenge with an amazing team. They all came because they read the book or knew the story, so we were all there with a higher purpose.” 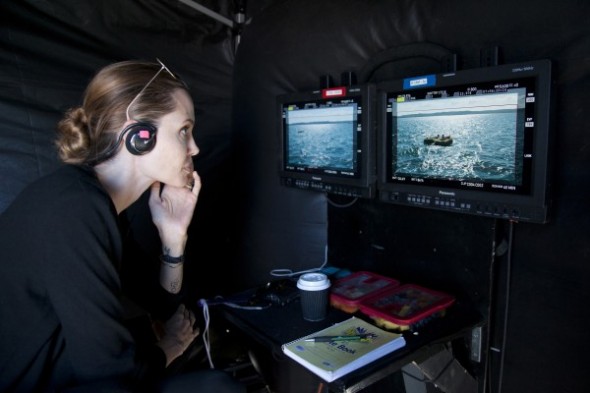 Jolie is now completing her fourth movie, By The Sea. As the director and screenwriter of the film, she’s also acting opposite her husband Brad Pitt. By The Sea is set in France during the mid-1970s. Jolie plays Vanessa, a former dancer, and Pitt is her husband Roland, an American writer. This will mark the first Brangelina collaboration since Mr. and Mrs. Smith in 2005. The film is a drama centered on a couple with issues, who take a holiday as a last-minute effort to save their marriage. Despite the grievous subject matter, when Jolie was asked to compare the pathos between her two latest movies she replied, “By The Sea was emotionally difficult, because I’m also acting in it. But logistically it was a walk in the park in comparison to Unbroken – it was a nice break.”

Zamperini’s story will undoubtedly move audiences to tears, and will lead them out of the motion picture with the certainty that all bad things come to an end. If you don’t let go you’ll be Unbroken.

See the trailer for Unbroken below.

– Article by Chiara Spagnoli Gabardi for The Untitled Magazine

THE HOBBIT: THE BATTLE OF THE FIVE ARMIES