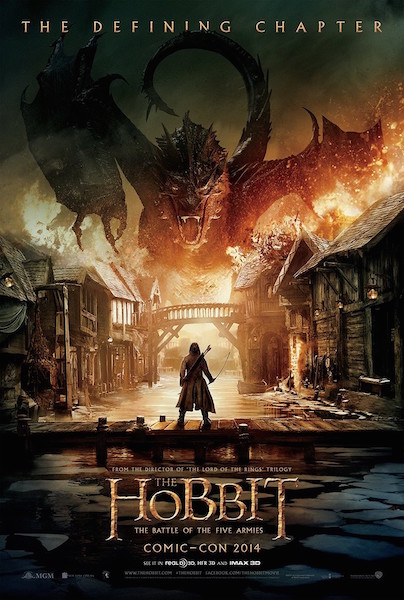 Bilbo Baggins’ unexpected journey comes to an end in The Hobbit: The Battle of the Five Armies, this year’s final installment of the epic three-part film adaptation, based on J.R.R. Tolkien’s classic tale.

At the conclusion of 2013’s The Hobbit: The Desolation of Smaug, Bilbo and the dwarves’ daring attempt to kill the eponymous fire breathing dragon in order to retrieve the latter’s long lost treasure has failed. Bilbo then chillingly asks himself, “What have we done?” as the furious Smaug heads towards the unsuspecting town of Esgaroth, or simply Lake-Town, which is south of the Lonely Mountain and East Mirkwood — for all of you who aren’t familiar with the geography of Middle-Earth.

Anyone with prior knowledge of the story knows what inevitably follows the film’s suspenseful cliffhanger: Smaug’s ultimate demise. Once the titular character is out of the picture, the treasure he has been guarding for many years will be completely up for grabs; not only to Bilbo and the dwarves, but to man and the elves, as well. Due to feuds and prejudices that go back generations, the dislike between the opposing groups is intensified by each group’s entitlement to a piece of the pot. But the reappearing Gandalf brings word of an approaching army of Orcs, goblins and wolves, presumably sent by the evil Sauron, the chief antagonist in The Lord of the Rings Trilogy. So, with the fate of Middle-earth hanging in the balance, this already divided group of races must decide whether to unite against the opposing forces or die.

According to the film’s trailer, and the previous two films, the closing chapter to the franchise will be a much more action-packed, extended and stylized portrayal of the upcoming battle. It seems to manage to stay true to Tolkien’s original source material, which can be seen as an allegory for World War I, or the Great War as it was called in the author’s time.

The Hobbit: The Battle of the Five Armies, directed by Peter Jackson and distributed by Warner Bros. Pictures, is slated to hit theaters nationwide on December 17, 2014.

– Article by Anthony Perrotta for The Untitled Magazine