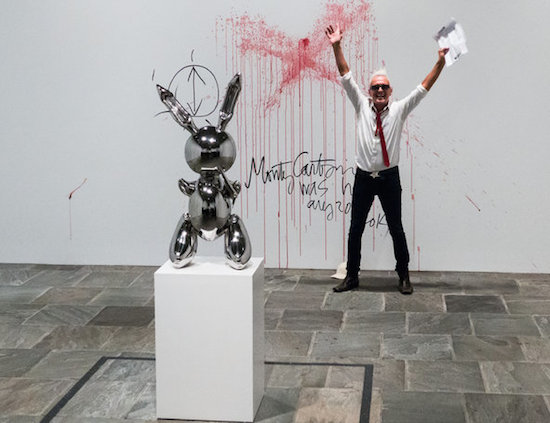 Performance artist Istvan Kantor was removed from The Whitney Museum for splashing what was reportedly his own blood in the shape of an X on the third floor of the museum’s current retrospective on the illustrious Jeff Koons. The Canadian self-described critic also managed to scribble “Monty Cantsin [his pseudonym] was here” and posed behind Koons’ Rabbit sculpture, which photographer Antoine Luten captured and immediately posted online. Kantor was quickly escorted out and sent to get a psych evaluation. He was released within hours and left with no charges. Thankfully, no artwork was damaged.

Apparently this isn’t the first time Kantor has unleashed his blood in a museum. He’s been banned from the Museum of Modern Art in New York, the Ludwig Museum in Cologne, and the National Gallery of Canada in Ottawa for the exact same stunt.  Not to mention, he also attempted to squeeze a capsule of blood on Koons’ famous Michael Jackson and Bubbles sculpture when it showed in Berlin in 2004.

After being discharged, the artist wrote on Facebook under his pseudonym, Monty Cantsin: “I just came out of mental hospital where the police took me after the Whitney I was discharged I am free I’ll put out my Supreme gift manifesto that I handed to the museum after the intervention tomorrow now I go out for a drink in the lower east side thanks for your support Monty.”