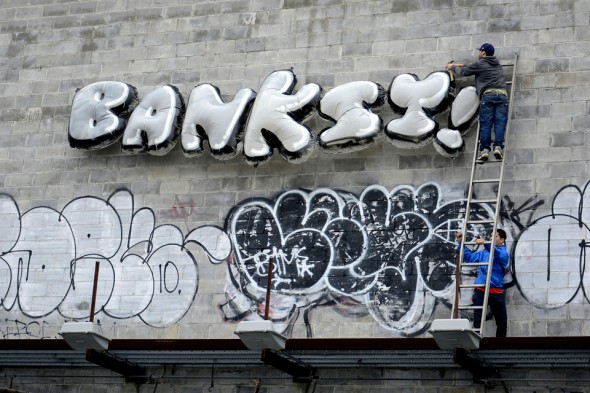 Banksy … what a prankster. To hear some people tell it, he’s either a genius or a poseur, a messiah or a screw. Banksy’s derivative and he’s decadent. He’s totally unsanctioned, hullabaloo. He’s a lark and a goof, a social satirist and a crock. He’s a solo act; no, part of a collective. He’s a Bristol Rover. No, a cop. Banksy is a pusher of envelopes, a defamer of shrews. He’s an artful dodger who attracts spot jockeys, streetwise scamps peddling pay-per-view. He’ll make you famous, pollute your city, fuck up your walls. He’ll tag your soul. But more than anything else, Banksy – as a concept – will elicit a reaction, encouraging more fervent debate than any artist you know.

In October of 2013, Banksy descended upon New York, a thriving metropolis he had previously described as “calling to a graffiti artist like a dirty, old lighthouse.” The fantastic thing about his month-long residency – and there were a number of fantastic things about his month-long residency – was that it actually lived up to the hype … part scavenger hunt, part treasure hunt, part P.T. Barnum’s buffalo hunt, all of it playing out across five boroughs. Banksy’s residency was televised, thanks to social media and email and cell phone vids and police records, website posts and news stories, dueling editorials and perspectives. Banksy’s romp brought the bloggers and the journalists, the doubters and the believers, the mildly-obsessed and the unintentionally curious, the mayor and his minions, the business owners and quick-change artists, the hunters, the haters, the naysayers and yaysayers, the hustlers and the taggers all into one referendum. Every day, a new discussion, as installations semi-magically appeared, then disappeared, sometimes within a matter of minutes.

Given all the footage (both amateur and otherwise), HBO was able to cobble together a documentary, tracing Banksy’s path in chronological order. Banksy Does New York, while not as intriguing as, say, Exit Through the Gift Shop, still provides some fascinating insight. This film is at its best when delving into the sociopolitical leanings of several pieces included in the residency. This film is at its worst when soliciting commentary from a handful of irrelevant windbags. A Daily News reporter who by her own admission was unable to uncover anything about Banksy throughout an entire month of covering him? A bridge and tunnel couple who had so little going on they spent every morning driving into the city to chase down that day’s piece? A Southampton gallery owner who failed to sell a reconstructed Banksy? How about a New York Observer editor who takes extreme pride in explaining why Banksy is so gauche? If the idea is to gather opinions that are only one step removed from several man-on-the-street observations, then mission accomplished, I suppose. But the overriding sense is that Director Chris Moukarbel sought out the very worst in terms of credibility, dragging down a captivating doc by leaps and bounds. Keep in mind, this is far from enough to ruin Banksy Does New York, which will more than likely grow in popularity as Banksy’s legacy continues to thrive, but it is enough to knock some wind out of its sails. Alas and adieu. Le sigh.

Banksy Does New York will have its New York City premiere at DOC NYC Film Fest on November 14th at the School of Visual Arts before airing on HBO on November 17th.

Watch the trailer for the film below.