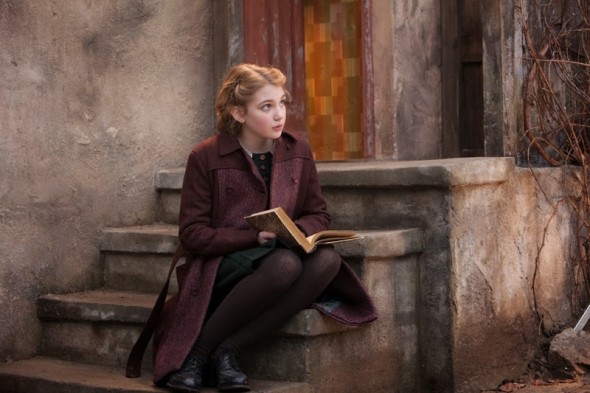 “Words are life.” Filming a novel whose sole purpose is to defy the death of books and liberate actual reading, The Book Thief is a rarity in the neverending book-to-movie influx. Armed with a whole off and onscreen team of Oscar-winners, calculated cinematography, Schindler’s List composer and costume designer and a genuinely wholehearted cast, Downton Abbey director Brian Percival‘s cinematic interpretation of Marcus Zusak’s award-winning novel might just make you put down the iPad and yearn for a paperback.

Set on small town Himmel Street (translates to “Heaven”) in Nazi-run Germany in World War II, The Book Thief is a beautifully dark tale of fate, narrated by Death and experienced by the brave, headstrong Liesel Meminger. Adopted by a caring German couple after her brother’s untimely death, Leisel is teased at her new school for her lack of reading and writing skills. Taught word-for-word by her new papa using her first stolen book, The Gravedigger’s Handbook, Liesel ignites an unquenchable flame for learning, temporarily stalled by the book burnings of Hitler-run Germany. When the Hubermann’s decide to hide a mysterious Jewish man in their cellar, Leisel’s about to learn a whole lot more about her beloved hardcovers and those wonderful things called words. 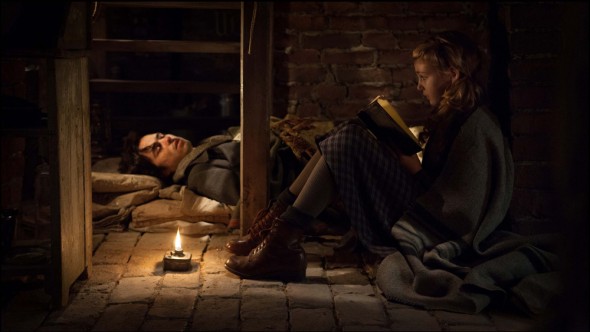 Directed by Downton Abbey’s Brian Percival, The Book Thief exudes a stunning eye for period detail, with Percival making his venture away from television into feature films. Sweeping crane shots, slow motion close-ups, the BAFTA and Emmy-award-winning director of North & South and Downton Abbey perfects the art of a story well-told. Australian screenwriter Michael Petroni’s (The Chronicles of Narnia: The Voyage of the Dawn Treader) adaptation of Zusak’s novel pays much respect to the original text with quotes left intact, although the slightly cheesy voice-over narration of Death works much better in print.

Going straight to the source, Percival seems to have poached half the talents behind Steven Spielberg’s WWII epic Schindler’s List. Scoremaster John Williams‘ composition is predictably heart-soaring, with enough sorrowful oboes, playful strings and timeless piano melodies to crescendo his way into a possible Oscar nomination, revisiting his Academy Award-winning score for Schindler’s List. Two-time Oscar nominee Anna B. Sheppard completes the picture with her wonderful period costumes, having worked on both Schindler’s List and The Pianist. 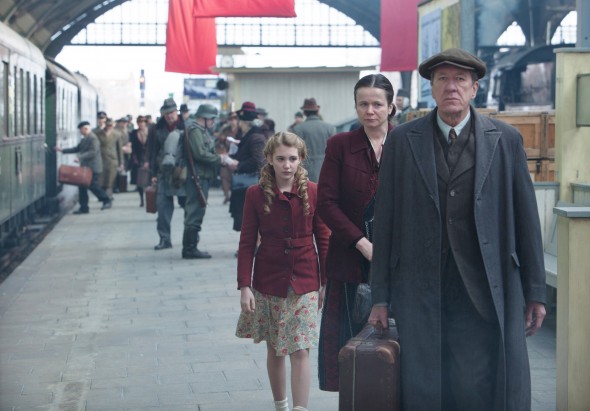 Strong, moving performances and heart-wrenching narratives from World War II-focused films have been constantly rewarded by Hollywood’s top eschelons; from Adrian Brody’s Best Actor role as Wladyslaw Szpilman in The Pianist to Bruno Ganz’s unforgettable Hitler in Oscar-nominated Downfall. Focused on the fate of a small German community, The Book Thief cuts no corners on beautiful performances, with wonderfully wholehearted acting from Oscar winner Geoffrey Rush as Hans Hubermann, the “man with an accordion heart” and two-time Oscar nominee Emily Watson as his wife Rosa, the “woman cloaked in thunder.” Beginning as your tired cliche of nagging wife-berates-patient-man combo, Watson and Rush lend a deeper, more sincere dimension to their characters, making a magic force of their little family unit.

Newcomers shine just as brightly; Ben Schnetzer leaves his one Law and Order episode behind to play Max Vandenburg hiding in the cellar, bringing a beautiful enthusiasm to Zusak’s philosophical words, while youngster Nico Liersch is unfaltering as best friend Rudy Steiner, winning every heart in the house. But the absolute gem of the film is the doe-eyed leading lady, 13-year-old Canadian actress Sophie Nélisse, breaking through with her Genie Award-winning performance in Philippe Falardeau’s 2012 film Monsieur Lazhar. Nélisse plays the brave Leisel Meminger with balanced sweetness and determination, easily convincing audiences of Death’s fascination with this one special human. 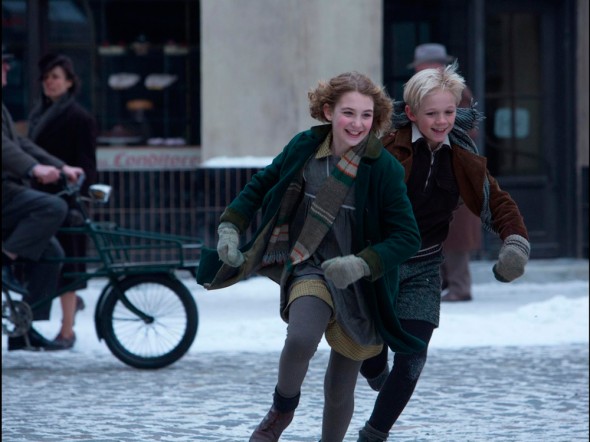 There are certain moments in Zusak’s novel that don’t carry the same weight in film; the relationship between Leisel and the aristocratic booklover Elsa is slightly underdeveloped, while the devastating post-bombing scene lacked the shattering poetry of the novel. However Percival’s film finds its own magic moments, from Christmas snowball fights in the cellar, to Leisel’s papa-made wall dictionary, to children shouting “I HATE HITLER!” from a serene pondside jetty.

The Book Thief could potentially nab a few spots in the Oscar race, with Gravity, 12 Years A Slave and Captain Phillips already big contenders for Best Picture nominations. Lovers of Zusak’s novel might find the film detriment to its purpose, however Percival’s interpretation pays great respect to the written word. If anything, physical book sales will rise, which is enough to quieten the haters (who are probably reading this on their iPads).

The Book Thief hits US cinemas on November 8.

Coverage by The Unitled Magazine.