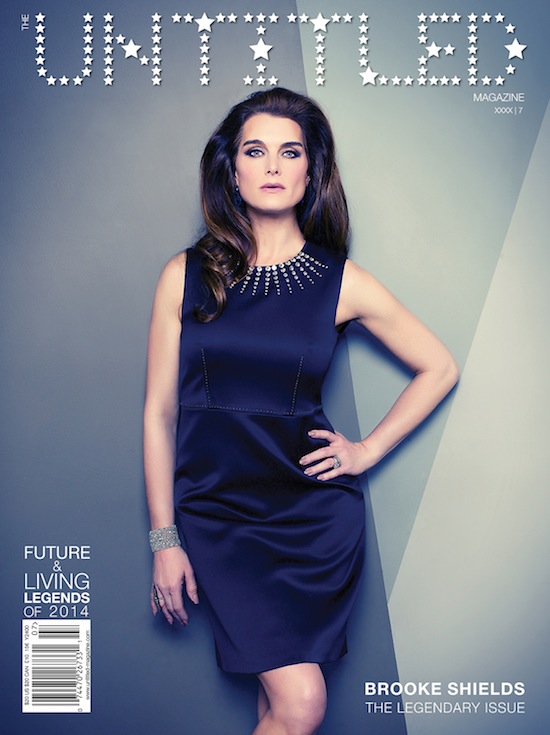 Brooke Shields: Photography by Indira Cesarine for The Untitled Magazine

Brooke Shields is well known for a number of high-profile touchstones, including but not limited to playing a child prostitute in 1978’s Pretty Baby; 1980s erotic coming-of-age film The Blue Lagoon; the romantic drama Endless Love; not to mention those Calvin Klein ads and that Vogue cover, which, at fourteen, made her the youngest model to ever occupy such illustrious real estate. Over the next thirty-six years she proceeded to cover a total of fourteen Vogue covers, star in her own television series which garnered two Golden Globe nods for Best Actress, as well as star in several Broadway performances including Chicago and Cabaret.

Brooke sat down with The Untitled Magazine‘s style director, Phillip Bloch, for a one-on-one interview about her life, career and forthcoming memoires. Check out an except from her interview below and don’t miss out on reading the full story, out now in The Legendary Issue 7. Visit our online store to buy your copy, or download the free “Legendary” Issue App on iTunes now!

Phillip Bloch: If you could do it all over again would you choose to be a child model or actress?

Brooke Shields: I definitely would, because now I see how hard it is… I was the first child at four at a modeling agency so I had an advantage. I know how hard it is to break in and I know how hard it is to decide who you want to be when you’re older, so it was sort of decided for me. I’m actually thankful because it did send me on a trajectory of an amazing life. Very high highs and very low lows, but still there was an extraordinary quality about it. I don’t think that would have happened had I not been a model and been at the right place at the right time at eleven months old.

PB: Did you ever feel frustrated by your career or find it difficult?

BS: They’re difficult for difficult reasons. I was put in a position that was impossible for me to succeed. Even though I kept saying it, it was on deaf ears, because people wanted the publicity and the money, and I ended up taking the fall for it. That was an emotional blow. No matter how bad a project is or feels, I can come out of it either doing a really great performance and getting noticed for it, or everyone gets blamed, the director gets blamed. I can usually pull out of whatever was in the situation, that one was not. Movies like Pretty Baby and Endless Love were the most tedious and were the most emotionally tiring. European directors don’t give you approval. I was like a puppy… “Give me a cookie! Give me a cookie!” However, I don’t believe that you have to be miserable to be good. I honestly thought that those were the only two performances of my life that I cared for, and Black and White I loved.

PB: Would you encourage your children to get into modeling or in the industry?

BS: It may be unavoidable. I won’t let them not get an education. I will seriously disown them if they don’t go to college.

PB: What do you think about the recent changes regarding the modeling industry and children? There have been a lot of laws regarding child modeling put into place recently.

BS: I think it got out of hand for a while. I think protection is needed for these young kids because, I mean, I had my mom and Ford. Those are bookends you can’t not have. I think the kids need it. I do think that I have a double standard in a slight way, because I was underage but it wasn’t close to being as provocative as what it is now. So, I think that it went a bit too far. It’s the same thing as Jackie Coogan’s law went into effect. All of those kids’ fortunes got swooped away by whatever. Now that needed to come into place. It’s this era’s version of that. If you’re on the runway at that age, and if you’re susceptible, how could you not be? You’re on a road that could be potentially devastating and you don’t have the support system around, and there are a lot of bad people around… it’s easy to do. And yeah, if you tell me to take a pill that will make me skinny, I would. I’d smoke cigarettes and have pills for breakfast, too. I grew up learning that that wasn’t the way to go. But if you’re a kid from Brazil, and you’re gorgeous and fourteen, this is glamorous.

PB: You were a big part of the sexual revolution in the late seventies and early eighties. Do you think that society gave you your props for being a courageous, groundbreaking little girl?

BS: Well, it’s weird. I think it was definitely two-fold. If I was truly cognizant of being groundbreaking, maybe. You know, the Gagas of the world, the Madonnas, or whomever that set out to shock, or set out to make a difference, to F the system. None of us in that period of time were setting out to be iconic. We were all involved. We were presented with certain things. We attached ourselves to them for whatever reason. Three months in Fiji, you know, get to do cool commercials with the IT photographer, whatever it is. I don’t ever remember ever setting out and saying, “I’m going to do a coming of age story, and therefore allow the children of my era to feel good…” There shouldn’t have been agitation or crucifixion. I was kind of given a lot more credit on both ends. I was given credit for destroying the morality of America. I was given credit being the face… you know what does all that really mean? I think that the people I valued, artists that I worked with: the Warhol’s, Keith Herrings, and the Horsts and the Mapplethorpe’s, they gave me a nod of approval. They spent time with me and on me and they celebrated something that they wanted to celebrate.

PB: What have you gained from some of the icons you’ve known such as Michael Jackson?

BS: The laughter for sure, as well as the rejoicing in our trust for one another to play, to laugh, and to not take everything so seriously. I would give him whatever he needed on a child-like level, and it was fine. You know, watching movies and eating candy. I knew that I didn’t want anything from him; I knew how to make him feel safe. I didn’t want a thing and he wanted me to have everything. And I think it was hard for him to deal with, because he didn’t know what to give. I wasn’t asking for anything.

PB: Calvin, did you learn anything from him?

BS: I learned from the experience from him per se. I think from the whole experience was that, you can push the envelope with regards to the rules. We made commercials to be played in movie theaters. They didn’t play them, because they said “It’ll never happen, you’ll never see advertisements in movie theaters.” We were the first! I had to memorize minute long speeches and I learned more. I didn’t spend as much time with him as I did with Dick [Richard Avedon].

PB: You’ve been in some scandalous films and commercials, was any of it really that scandalous? Or what it just people’s perceptions and hang-ups at the time?

BS: I don’t think they were that scandalous because I always had body doubles. And the one movie that I sort of didn’t have full body double was Pretty Baby and I was eleven. It was also a period piece. Everything after that, I had this separation from – I was so adamant of proving that they were just movies that I cut myself off so emotionally from the content and I’m very capable of doing that. I’m a child of an alcoholic and I’m textbook. Honing that talent from really young age was probably what saved me emotionally, but counter-intuitively, I never really nurtured my talent as an actress because I never allowed myself to commit emotionally. I was so afraid of getting lost or swept away or destroyed. It was my source of survival. Whether I could have articulated it like this thirty years ago? I don’t know.

PB: Moms are human and as a kid you think they’re godly. How do we accept their faults and see they’re not perfect, and then to be a child of an alcoholic. How do you deal with that and have them in your life?

BS: This is what my book is about. Without giving anything away, I don’t think you do accept their faults. I don’t think I think children justify them. You make them work for you. You take on their faults yourself. You forgive them, but it’s not really accepting their faults. You go, “No, No! That’s not it! That’s not their fault!” And so there’s this thing that happens. If you acknowledge their faults, your world is not safe… My mother loved to say that I fired her. It was probably more of a divorce. There’s no easy way to do it.

PB: You had a very privileged life. How do give back?

BS: I’m always signing on to some charitable cost. What I’m trying to do is streamline it a little bit more. I try to make sure that I always give back in a small way every day. Yes, I do all the charities and I do all the events. Raise money for this, or speak at that and I will always do that. And I’m always donating to whatever, but I try to be charitable in my own way. 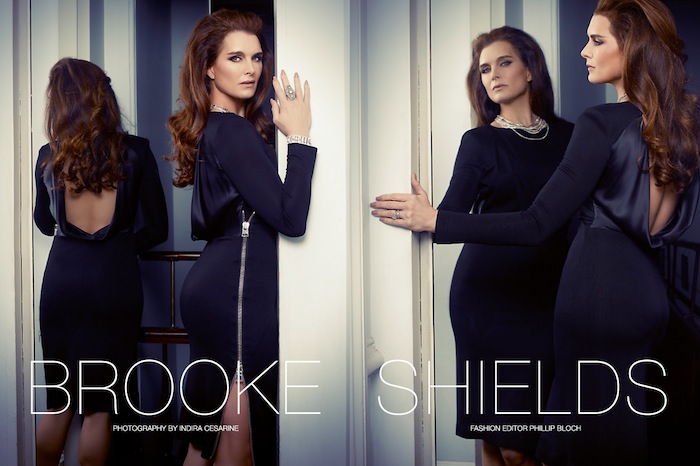 For more photos of the beautiful Brooke Shields, check out the spread in The Untitled Magazine‘s “Legendary” Issue 7!

Watch our exclusive behind the scenes video with Brooke Shields! 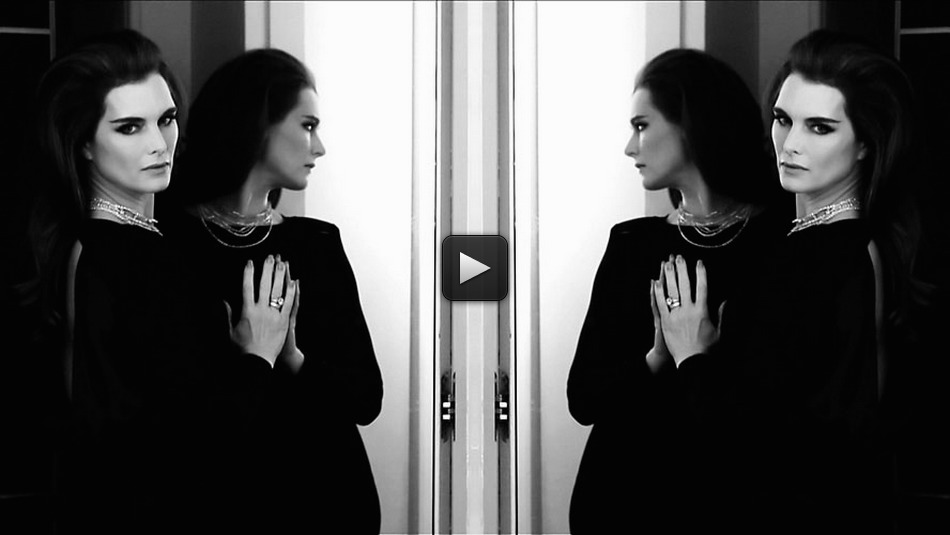