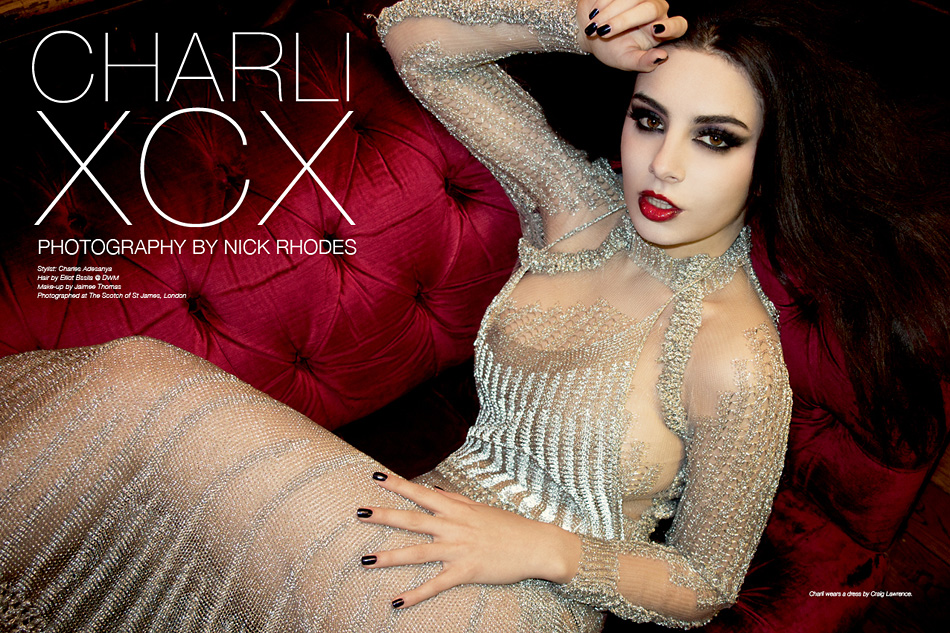 Her first mixtape titled Heartbreaks and Earthquakes released in 2012, contained entirely original songs, and catapulted her into the spotlight on a supporting tour for Coldplay.  “I had never played in a stadium before,” says Charli. “It was like a total whirlwind dream experience. They’re one of the biggest bands in the world right now and it was such an honour to tour the world with them. They were really supportive of me… On some nights I was playing to 65,000 people. It was insane. I felt like such a superstar.”

Her second mixtape, Super Ultra, featured breakthrough hit “I Love It” with Icona Pop. Charli raves to us, “The other night, I saw it on the HBO show Girls. It’s my favorite show in the world, ever. I just thought, ‘OK. I’m happy now. This has made my year.’” When she’s not rubbing shoulders with her favorite artists, Charli XCX spends her time penning hits for them. “I’m always writing for people. Songwriting for others is one of my favourite things to do. You can really escape into another world and get into somebody else’s head for a while… I love how music speaks to everyone. It just connects and makes people feel emotion. It’s so emotional. And it’s so personal. I love how music can rescue someone. It’s just so powerful.”

With her debut full-length album, True Romance, released in April, a fully-fledged North American tour with Marina & the Diamonds, Europe touring with Ellie Goulding, and her own tour of the UK later in the year, as she says, “Make the most of your time on earth, because it will all be over sooner than you know it.” 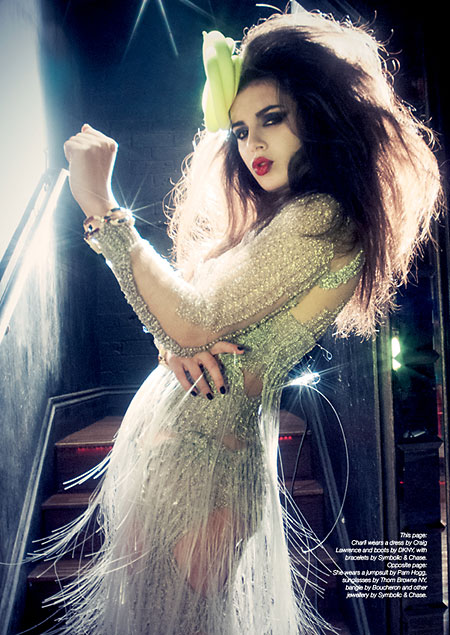 Here’s the full-length, exclusive interview with Charli XCX for The Music Issue of The Untitled Magazine:

Charli XCX: I got started with music when I was around fourteen and I started making my own songs on an old beat-up Yamaha keyboard. I started putting them on Myspace and after a while this guy, who was putting on a lot of raves and parties in Hackney in London, hit me up and was like, “Come and play some shows.” So when I was fourteen, fifteen I started going up to London and playing these raves at 4am. I guess that’s how it started really.

IC: How did you come up with your performance name?

CX: When Chaz (the rave promoter) asked me what I wanted him to put on the flyer for the parties, I panicked and was like, “Ahhh I don’t have a stage name…” So I basically was like, OK, use Charli XCX coz that’s what I used to sign off in texts and on MSN Messenger as. It’s cute.

IC: At what age did you write your first song?

CX: Well, I used to try and form bands in the playground when I was a lot younger… But we just sang into hair brushes and jumped around pretending to be the Spice Girls. Ha. But it was probably around fourteen. One of the songs I wrote when I was that age is going on my record. That’s quite strange when I think about it, but I guess it proves it’s a good song if it’s stood the test of time.

CX: I wrote this song called “I Love It” for this awesome girl band called Icona Pop. It’s been going crazy and people are loving the song, which is incredible. It’s gone platinum or gold in lots of different countries… but what’s really, really cool is that the other night I saw it on the HBO show Girls. It’s my favourite show in the world EVER. I am totally in love with Lena Dunham. She’s like the most hilarious and beautiful woman ever. I LOVE HER! And when I saw her singing along to the song that I wrote, like totally losing her shit in a club  I just thought, OK I’m happy now. This has made my year.

IC: What was it like to be on tour with the likes of Coldplay and Santigold?

CX: It was brilliant. Santi is so inspirational, she’s such a strong, kick ass female who understands her craft perfectly. It was amazing to hang with her and watch her show every night. Me and my band kind of developed a crush on her two dancers. They are soooo DOPE! I would love to be able to dance like them. Coldplay was like a total whirlwind dream experience. They’re one of the biggest bands in the world right now and it was such an honour to tour the world with them. They were really supportive of me and just so sweet you know. On some nights I was playing to 65,000 people… it was insane… I felt like such a superstar.

IC: Who are some contemporary artists you are most influenced by?

CX: When I first got into writing my own music I was really influenced by all of the artists on the label Ed Banger, like Uffie, Feadz, Justice and SebastiAn. I still love Uffie now. I think she’s super cool. I’m also inspired by Kate Bush and Bjork massively. I just think everything they do is so magical. All of their songs are so true and honest and really make you feel something. Whenever I listen to “All Is Full Of Love” I cry. It’s just the most perfect song ever. I also am a huge Die Antwoord freak. I think that everything they do is so fresh. I love all their videos, they are just so, so, so perfect.

IC: Who inspires you the most in the music scene?

CX: Out of the people I’ve met, I would probably have to say Robyn. She’s just so on it. Like, she’s super talented and she knows her shit and she’s so down to earth and confident with herself. Lots of people who work in this industry are very insecure and have issues with hierarchy and status and shit. I don’t have time for that, I would rather just be a nice person and not have to deal with all the sly stuff… Life’s too short. I really admire Robyn as a musician and a performer but also as a girl who’s just on her shit and cool. It’s hard to find in this industry.

IC: Do you have a mentor?

CX: No, I just do my own thing really. I make my own decisions about my career, that whole mentor thing is a bit too “talent show” for me.

IC: If you could be any other musician or band who would it be?

CX: To be in the Spice Girls for the day would be cool. But I’m happy being me.

IC: If you weren’t in music what would you do?

CX: I’d probably just be having a breakdown if I wasn’t doing music. It’s my passion.

IC: What was the most difficult performance in your career and how did you handle it?

CX: My most difficult performance was definitely the first show I did with Coldplay. I had never played in a stadium before and I didn’t realise that it is like, a total other different world from doing club shows. Everyone can see your every single move because you’re on massive screens and it was a totally different audience than my usual audience, it was quite scary. But I just learnt as I went along and by the end of the tour I had everything on lock.

CX: I’m definitely a romantic. All of my songs are about romance in some shape or form. I cry lots. I’m obsessed with The Cure. I fall in love easily… Yes I’d say a hopeless romantic.

IC: How did you come up with your “look”?

CX: I don’t know really, it just kind of happened. I suppose like any teenager, as you grow up you just experiment with things. I always loved wild, punk, crazy girls, like Anabella Lwin and Blondie. As I got older, I got inspired by the fashion in my favorite films, like Spice World, Clueless, Carrie and The Addams Family. I guess I just blended everything together. I dress differently every day though, it depends on my mood. Sometimes it will be all black, sometimes all tartan, sometimes every colour under the sun. But I always wear my Buffalo platform shoes. They are like, my LIFE!!!

CX: At the moment it’s Roberto Piqueras. He’s a brilliant Spanish designer who makes these amazing futuristic digital prints. All of the shapes of his clothes are really interesting too. It’s like street fashion at it’s best but it has this extra sprinkle of magic. He’s wild. I always wear his clothes everywhere.

IC: Do you have a motto or words of wisdom you live by?

CX: I suppose, just be true to yourself. I think everyone should live by that. And make the most of your time on earth, because it will all be over sooner than you know it.

CX: I love how music speaks to everyone. It just connects and makes people feel emotion. It’s so emotional. And it’s so personal. I love how music can rescue someone. It’s just so powerful.

CX: My favorite song I’ve ever written is definitely “Stay Away”. I wrote it with Ariel Rechtshaid and I guess it was the first song where I felt like I’d really found myself. There was something about that song that I just knew was perfect for me. It kind of changed the direction of everything for me. Before that song, I felt very lost in what I was doing and the music that I was producing, but that song got me back into a place I was happy with. I love it.

IC: What are your current projects?

CX: I’m always writing for people. Songwriting for others is one of my favorite things to do, just because you can really escape into another world and get into somebody else’s head for a while. I want to keep on writing big pop songs for other people. I guess that’s what’s going on at the moment. As well as getting ready to release my record, which is out in April and then touring with Marina and The Diamonds in the states throughout May.

IC: How would you describe your forthcoming album in one sentence?

CX: Cosmic angel pop with hip hop beats and a sprinkle of melancholy.

IC: How was it working with Nick Rhodes from Duran Duran for the shoot?  Did it add another element to collaborate with another musician for the story?

CX: It was great. He’s a very talented photographer who obviously has had a lot of experience in a shoot environment. We clicked well and we were totally on the same wave length throughout the shoot… The whole time we were like, bigger hair, bigger hair… more gothtastic! It was fun.