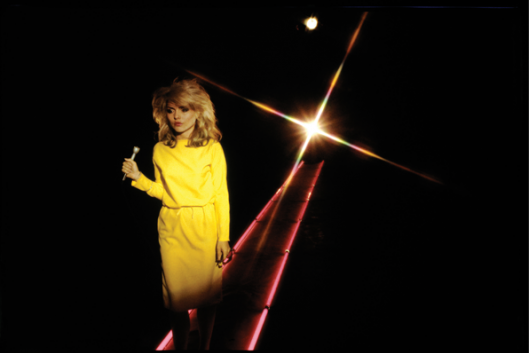 Blondie co-founder, songwriter, guitarist and photographer Chris Stein has a new collection of photographs on exhibit. For his latest exhibition, Stein’s rare and iconic photos are being showcased at the East Wing Gallery in the prestigious Somerset House, an arts and cultural center in the heart of London. The exhibit opened on November 6th, 2014 with a star-studded launch event and will be on display through January 25th.

The exhibit is happening alongside the recent release of Stein’s book of photography and anecdotes, Chris Stein/Negative: Me, Blondie, and the Advent of Punk (Rizzoli).The selection of photos on display at the Somerset House can all be found within the pages of the coffee-table book. The images offer a revealing look back at one of the most influential bands of our time and also provides a look at the larger historical and global context of the music scene that they pioneered. Many well-known shots and never-before-seen photographs of early live performances, private moments on tour and at home and the band’s world travels are showcased, including his friendships and interactions with some of music and art’s most seminal figures and places including The Ramones, Iggy Pop, Andy Warhol, Joan Jett, Mudd Clubb, CBGBs, the East Village, Andy Warhol’s Factory, Beverly Hills Hotel, and many more. The book, filled with memories and anecdotes direct from Stein, is a visual feast for Blondie fans captured intimately and inimitably through the insider lens of Chris Stein, and a pop music history lesson. The book also specifically captures the relationship between Chris and Debbie Harry.