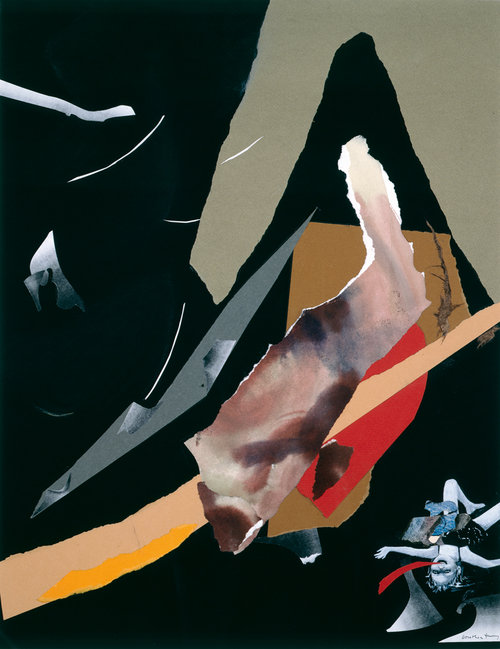 Opening Reception June 28 from 6-8pm, by invitation only

Dorothea Tanning was one of the most compelling artists of the twentieth century, making an inexhaustible contribution to the arts in the fields of painting, sculpture, printmaking and poetry. This presentation, the first in Europe since her passing earlier this year at the age of 101 years old, looks beyond the field of Surrealist painting for which Tanning is best known, exploring her compositions on paper. Displaying her early collages and wall reliefs, as well as her more intricate collages of the 1980s, the exhibition provides a unique insight into one lesser-known aspect of Tanning’s practice. In these images, Tanning often refers to erotic, biomorphic and animal forms, intertwining these with textured paper or fabric segments to create abstract, fractured and dark dream-like spaces. These paper and fabric collages elucidate her exploration of nightmarish landscapes, her wry sense of humour and her devotion to the reinvention of the human body in art. Dorothea Tanning: Collages brings together a rarely seen body of work by this multifaceted artist, whose career expanded across six decades, drawing further attention to this little known and under appreciated aspect of her work. This exhibition was organised with Dorothea Tanning’s support and it brings us great sadness that she did not live to see it realized. It is however, a privilege to be able to show these collages which reveal an intimate side to Tanning’s practice.

Paper works dating from the 1970s and ’80s are exhibited along with her earlier and more humorous photographic collages dating from as early as 1945 and assemblage pieces dating from as late as 2005. The parallels between Tanning’s earlier and later collages offer a contextual insight into how she pioneered and developed the use of this technique. One of the earlier works is a photomontage of a chess tournament at the Julien Levy Gallery and includes Tanning and her husband Max Ernst. All participants were unsuccessfully competing against a blindfolded chess-master, while Marcel Duchamp called out the players’ moves. This series of photographs is curiously superimposed with an upside-down ivy branch, reminiscent of burning flames, which alludes to the intensity of this encounter. Another early work dating from 1967 is The Artist as Dog, a playful montage of a photograph of Tanning’s beloved dog laid over a photographic self-portrait of the artist lying on a chaise longue.

Although Tanning first began wittily exploring collage in the late 1940s, it wasn’t until the late 1980s that she considered this medium as a more focused strand of her art production.  The 1970s and ’80s saw a culmination of Tanning’s career as she moved away from narrative Surrealism and started further exploring elements of the Dada movement such as the use of found materials like dried plants, newspaper, photographs and Xeroxes. The combination of her new style, with the more traditional Surrealist influence lead to a greater complexity in her work.  While some works such as Glad Nude with Paws (1978) incorporate a surprising collage element within a painted or drawn image, by the mid 1980s Tanning started investigating the possibilities that the materials available to her in her studio could provide. Recycling ripped remnants of her own watercolours and combining them with torn pieces of tracing and coloured paper and fabric swatches that evoke her cloth sculptures, she created intriguing abstract and aesthetically modern collages that blur the boundaries between the conventional categories of media. In works such as Emotion II (1988) Tanning’s multiuse of appropriated materials, such as pieces from her preparatory colour tests and flowings from her watercolours became more obvious. Emotion II and Who Else (1988) also exemplify Tanning’s recurrent use of the female form, seamlessly floating in a silent but sensual interrelationship with its abstract surroundings. In the latter piece, the female figure is Susan Sontag, a long-time literary icon and friend of Tanning’s, overlaid with cryptic words written in white chalk creating a fascinating dialogue between their work. The human hand, which is present in this work and appears in several of Tanning’s collages, is another example of how she uses and re-appropriates the body in her work. Historically, the hand has traditional and pre-historic connections with art production, sometimes appearing tied up leading to darker and more complex interpretations. Tanning’s inventive use of photocopies of her own hand in her collages is both remarkable and indicative of her pioneering spirit.

This exhibition has been organised in collaboration with The Dorothea Tanning Collection and Archive, New York.