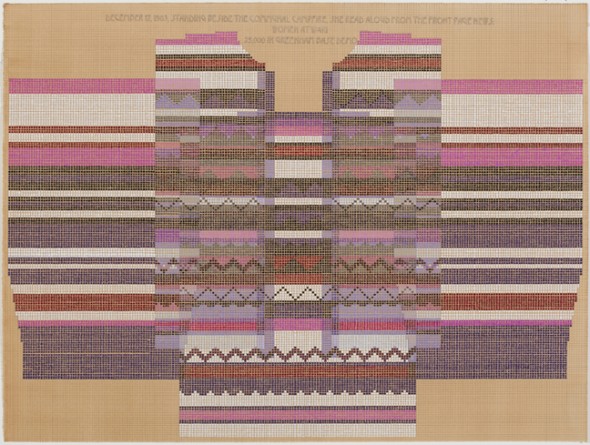 AMBACH & RICE is pleased to present It’s Never Over, a solo exhibition of paintings, textiles and ceramics by Ellen Lesperance. The exhibit continues the artist’s reverential examination of female activism while underscoring the parallels between contemporary and ancient heroines.

Lesperance places the viewer on the periphery of female activism, manifesting political and societal transgression through a delicate use of materials. Images of protest placards or demonstrations are eclipsed in favor of interpersonal dynamics that place ideology in tandem with individuality. Lesperance’s paintings of activists’ sweater patterns extract intimacy from collectivism; their ornate grids suggest sieves through which ideals and virtue take root. These atlases of soft armor are accompanied by text; Lesperance’s own, historical accounts, and direct quotations from artists and activists such as Nancy Spero and Rachel Corrie. The integration of text into the paintings orients the viewer, evoking the bodies and minds that once inhabited what have become patterned husks.

For the first time Lesperance’s paintings introduce textiles derived from mythic sources, the representations of fighting Amazons found on ancient Greek, Roman and Turkish ceramics. The Amazons, a mythic tribe of female warriors depicted in postures of defiance, serve as a bridge between the resilience and courage embodied by modern day female activists. Lesperance discovered formal correspondences and shared emblems such as snowflakes and chevrons to effectively parallel a historical lexicon of dissent.

In 2012 Lesperance encountered ancient Tanagras at the Princeton University Art Museum that depicted running Amazons; an anomaly given these terracotta figurines dating from fourth century B.C. typically only portray cloaked women and girls. Tanagras are believed to have been votive objects or funerary offerings intended to appease female deities. Lesperance produced ceramic molds to resurrect these effigies in the same manner they were originally produced. The prominence of the garments adorning the figures is echoed in Lesperance’s own conceptual practice, which highlight clothing as an extension of identity and attitude. The figurines will be augmented by pieces of draped silk and wool. The artist wrapped these textiles around bouquets of flower dyestuffs which were subsequently buried in the ground to fix the dyes into the fabric via decomposition. Burial and resurrection are mirrored in the artist’s process and the archeological excavation of the original statues, poetic insubordination that although weathered, refuses to die.

Ellen Lesperance lives and works in Portland, Oregon. Recent exhibitions include Dear Pippa Bacca…, AMBACH & RICE, Frieze Frame, New York, US, and Hang Up, Josh Lilley Gallery, London, UK. Her work was recently acquired by The Brooklyn Art Museum and The Museum of Arts and Design. She will be featuring in the forthcoming Phaidon drawing anthology, Vitamin D2.