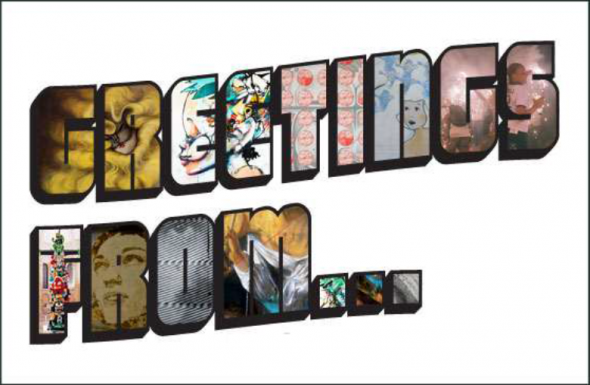 WHILE WE WERE AWAY: A GROUP SHOW CURATED BY TOVA LOBATZ

941 Geary is pleased to present While We Were Away. Curated by gallery director Tova Lobatz and composed entirely of artists Lobatz has become aware of while traveling, While We Were Away focuses on the intersection of the creation of art and the travels involved with it. Featuring work from  Miss Van (France), Amanda Marie (US), How and Nosm (Germany), Poesia (US), Sten Lex (Italy), Scott Shannon (US), Vhils (Portugal), Jaybo Monk (France), Hebru Brantley (US), Julio Pardo (Spain), and Chanoir (Columbia), the exhibit will open Saturday, January 19th from 6-9pm and will run until March 2nd, 2013.

The contemporary art market has become increasingly borderless as artists across the globe gain recognition, and with it, opportunities to bring their work far from their own hometowns. This has changed not just the role and impact of art, but the individuals behind it who have the chance to incorporate a wider scope of influences into their artistic framework.

In 2009, TATE curator Nicolas Bourriaud proposed a hypothetical end of postmodernism and introduced a new period with his exhibition Altermodernity. The opening of Bourriaud’s manifesto reads, “A new modernity is emerging, reconfigured to an age of globalization – understood in its economic, political and cultural aspects: an altermodern culture. Increased communication, travel and migration are affecting the way we live. Our daily lives consist of journeys in a chaotic and teeming universe.” This passage speaks to the development that inspired While We Were Away, but Lobatz’ fascination is with the indelible way these experiences of traveling, in countries not your own, places outside one’s comfortable routine or familiar language, inspire artists’ identity and creative drive. Frequent travel presents a new context to view the world in and a myriad of inspiration, but it also requires the sacrifice of consistency, and can stand in the way of personal relationships. It is all these complications that Lobatz has asked the artists for While We Were Away to give us a glimpse into.

The artists featured- Miss Van, Amanda Marie, How and Nosm, Poesia, Sten Lex, Scott Shannon, Vhils, Jaybo Monk, Hebru Brantley, Julio Pardo, and Chanoir- display the vast talent that can be seen in cities around the world today, from pioneering street art in Toulouse to photography in Barcelona. With an engaging installation of personal memorabilia collected from every participant, Lobatz asks viewers to reflect on how travel has shaped the process and perspective of each chosen artist, and seeks to establish a new precedence of candor in artist exhibitions.

How and Nosm (Raoul and Davide Perre) are identical twin brothers known for their large scale graffiti based murals that adorn city walls around the world. The red, black, and white-based imagery is instantly recognizable, and can be found in South America, Europe, Asia, or cities around the U.S.

Born in 1976, Poesia is a self-taught San Francisco Bay Area artist. During his early years as a graffiti writer at the turn of the nineties, he was recognized for his experimental Wildstyle pieces and continued on as one of the pioneering practitioners of what became known as Abstract Graffiti.

Chanoir (Alberto Vejarano) born, 1976 (Bogota, Colombia) graduated from the Fine Art of Paris at Jean-Michel Aberola studio in 2002, six years after getting into graffiti. The artist currently lives and works in Paris and his work has been shown in Paris, Barcelona, Bogota, Miami, San Juan, and Beijing

Toulouse native and current Barcelona resident, Miss Van started wall-painting in the streets at the age of 18, initiating the feminine movement in street art. She is now exhibiting all around the world from NY to LA, Europe (France, Switzerland, Germany, Spain, Italy, UK), and Asia.

Sten (born 1982, Rome) and Lex (born 1982, Taranto), are Italian street artists that are considered some of the pioneers of Stencil Graffiti. They began in the early 2000’s, before any notable stencil culture had reached Italy, and now have work in major international cities such as London, Barcelona and New York.

Hebru Brantley, lives and works in his hometown of Chicago, Illinois. With an affinity for visual art that began in childhood and a degree in film, Brantley has been inspired by science fiction, comic heroes, Black Folk art and Japanese anime. A transition from graffiti to canvas has resulted in Brantley’s use of a vast array of mediums, from found objects and spray paint to coffee and tea.

Vhils, born 1987, Portugal, is a graffiti/street artist named Alexandre Farto, living and working in London and Lisbon. Using a technique of deconstruction uniquely his own, which can call for hammers, jackhammers or even explosives, the artist brings immense portraits to walls and billboards that cannot be easily forgotten. Vhils has had solo shows in Lisbon, London, Paris and Shanghai.

An American painter and Stencilist, Amanda Marie Ploegsma  has been living and painting in Colorado since 2001. She attended the Rocky Mountain College of Art and Design and has exhibited extensively the US and Europe. Influenced by ‘Golden Era’ children’s illustration, Amanda Marie brings a playful and charming wit to her pieces, incorporating a variety of mediums, including acrylic & spray paint, wheat paste, hand-cut stencils and vintage sewing patterns.

Julio Pardo, born 1982, is a Barcelona- based photographer. Pardo’s work allows a glimpse into the wild abandon of a youth spent travelling. Infused with haphazard beauty and a raw freedom, Pardo has exhibited in LA, New York and Barcelona and his ‘zines have become a favorite among the fashion set.

Raised in Warwick, NY, Scott Shannon is a working artist in Miami, Florida. Shannon’s first solo exhibiton was in March of 2010 at Spinello Gallery (Miami) and since then the artist has gained recognition for his detailed work, drawing on dark inspiration to complete drawings done entirely in crayola crayon.

Jaybo Monk left his home in the south of France at a very young age and moved to Kreutzberg, Berlin in the early Eighties. He became a graffiti writer, street actor and hip-hop musician. Since then, he has been exploring the creative world in every direction, founding a street wear company as well as a culture magazine, before embracing the canvas. Jaybo is a member of the Agents of Change with Kofie, Derm, Remi Rough and many more.

If you missed the openings at our sister galleries over the weekend, have a look at “The New Race” by local artist D Young V at White Walls as well as “Winter Group Show” 2013 at Shooting Gallery. A very special thank you to all who made it out to the last Larkin Street openings before our big move to the new space in February; it was a great night!