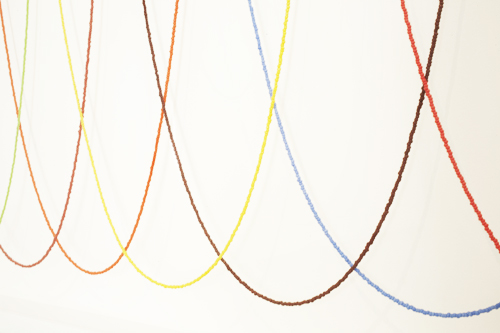 Maloney Fine Art is pleased to present an exhibition of new work by George Stoll.

Continuing his investigation of the catenary curve, George will present a group of new, small scaled sculptural works in shadowbox frames as well as a large scale work pinned directly to the wall.

“Early in the summer of 2011, I was at a bead show in Santa Monica, CA, where I found and then bought some colored glass beads. I was drawn to the richness of the solid colors and to the character of the individual beads. Although I wasn’t sure what I would do with them, I returned the next day and bought the rest. A month later, in New York, I found some more beads that had a similar richness.

My first impulse was to wear them, but after stringing and restringing, I ultimately hung the beads on the wall. Not only did this change their function but it also opened up the scale. All through that fall I experimented with the beads, finally organizing them into equal lengths of color in prime number sequences. I hung the strands 1 1/8 inches from the wall on steel pins, draping them into catenary curves.

Four of these pieces were shown at Maloney Fine Arts during the winter of 2011-2012 and others were shown with some of my wax Tupperware pieces at Winston Wachter Fine Art in Seattle that spring.

I continue exploring the visual possibilities of beads, gravity, prime numbers and catenary curves. For this show, symmetry is consistent within the group and visual tension is created by the interaction of the colors swooping together. Most of the pieces are hung inside shadow box frames. The frames not only define the negative space surrounding the pieces but they also allude to curio cabinets, like butterflies pinned behind glass.” – George Stoll