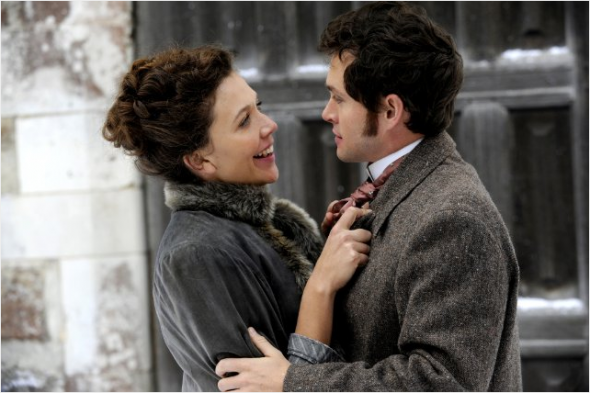 Hysteria, the new film by director Tanya Wexler, fictionalizes the real life story of Dr. Joseph Mortimer Granville, a Victorian doctor who invented the first electric vibrator in the 1880s, which was later patented and sold in 1902 by the American company Hamilton Beach.  The film examines how Dr. Granville’s invention was used to cure women with hysteria, a Victorian ailment that was applied to women suffering from any ailment, from melancholy, to anxiety, to water retention.  The film has an all-star cast, featuring Maggie Gyllenhaal, Hugh Dancy, Jonathan Pryce, Felicity Jones, and Rupert Everett.  The film follows Hugh Dancy as Dr. Mortimer Granville as he is moved around from hospital to hospital because his modern medical theories on things like “germs” don’t match up with the opinions of his colleagues.  Finally, Granville meets Dr. Robert Dalrymple (Jonathan Pryce), a kindred physician trying to treat the many manifestations of hysteria with a new method called “pelvic massage,” which drives the female patients to “hysterical paroxysm.”   The treatment, which today seems highly questionable, at the time was not considered lascivious in the least, it was simply a gynecological procedure like any other.  Although the procedure seems to be producing positive effects, Dalrymple suffers from hand cramps and sore muscles, so the duo begins to slowly look into mechanized treatment.  In the mean time, Granville is quickly paired off with one of Dalrymple’s daughters, becoming engaged to Emily (Felicity Jones), a soft-spoken, intelligent, manner-minding girl.  However, it is Dalrymple’s other daughter Charlotte (Maggie Gyllenhaal) who isn’t afraid to speak her mind that captures Granville’s attention with her boisterous, effusive, and passionate personality.  Charlotte has dedicated her life to woman’s suffrage, equality, and helping the poor, denouncing her father’s work as a gross misconstruction of female mental and physical health.

The film manages to cover a difficult subject matter, even in these very post-Victorian times, with a kind of frank humor and lightness that is refreshing to see.  Although it touches on issues of woman’s suffrage and class equality, instead of becoming bogged down by these heavy topics, Hysteria manages to use them in a smart way that propels the plot forward and gives a resonance of meaning  to even the more frivolous plot lines.  At times, given that the film is, at heart, a romantic comedy, it can be quite predictable.  However, its predictability is easily forgiven considering the traditional Victorian marriage plot the script has built itself upon.  That combined with charming performances from a cast of talented actors, with particularly outstanding comedic turns by Rupert Everett and Sheridan Smith, wipes away all traces of boredom or triteness the film might have otherwise suffered from.  Lighthearted and fun, Hysteria is a delightful, comedic jaunt through a taboo object’s history and the origin of a female sexual revolution.

Hysteria will be released nationwide on May 18. 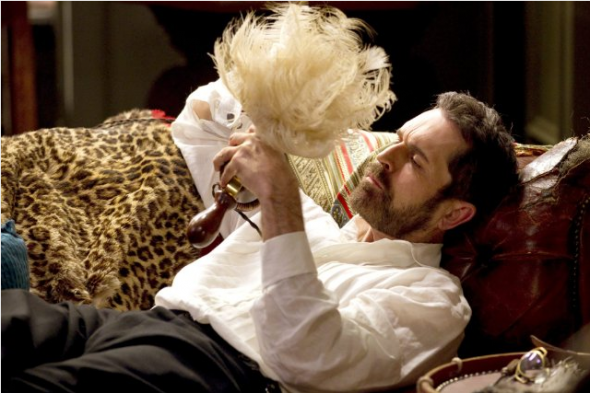