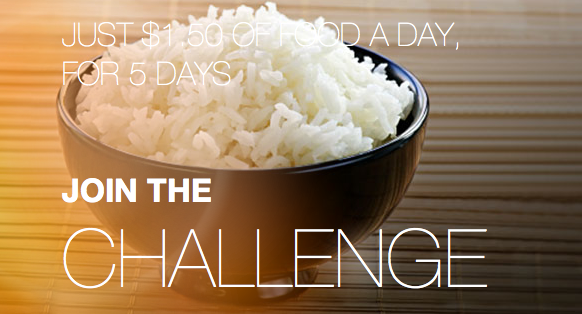 To give a glimpse into the lives of 1.4 billion people who have no choice but to live below the line every day – and who have to make $1.50 cover a lot more than food…

Live Below the Line is an initiative of the Global Poverty Project, an education and campaigning organization whose mission is to increase the number and effectiveness of people taking action against extreme poverty. The Global Poverty Project educates and activates citizens to become effectively engaged in the movement to end extreme poverty, and is best known for its world class multimedia presentation 1.4 Billion Reasons. This feature presentation has been seen by over 100,000 people since 2009 and is delivered in schools, businesses and communities around the globe.

They are passionate about equipping people to make a real difference in fighting poverty, and so are focusing on connecting people up to the organizations and issues that have the biggest impact. “We run Live Below the Line because we think that to really fight poverty, we’ve got to try to understand it – and the challenge provides a glimpse of what it is like to live on $1.50/day – a challenge that is faced by 1.4 billion people in our world today.”

They have teamed up with some of the best U.S. charities that fight extreme poverty around the world.  In 2012, Live Below the Line is running in the U.S., UK, and Australia simultaneously, with more than 20,000 people spending 5 days living below the line.

Across three continents, people will join the movement to tackle extreme poverty!