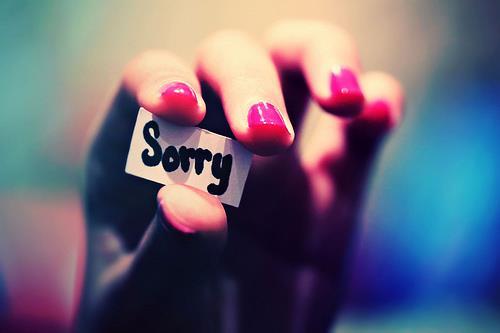 “Sugar and spice, and everything nice -” isn’t that what little girls are made of? That’s what we’re told, at least. To be a girl, we must be nice, sweet, and inoffensive. This has had the effect of making women more aware of potentially offensive actions, and when that happens, we immediately blurt out an apology, like an over-full tube of burn ointment. It has become a habit for so many of us, and sometimes it’s said more out of a need to keep the peace than as a sincere mea culpa. It is especially a problem in the workplace, where apologizing for things that really don’t need to be apologized for can create a perception of weakness.

Gender linguist, Deborah Tannen, has hypothesized that men are more attuned to the fact that an apology can symbolize defeat. Like, she writes, “a wolf baring its neck or a dog rolling over on its back, an apologizer is taking a one-down position.” This may explain why apologizing is detrimental in the dog-eat-dog workplace, but why do women apologize so much in the first place?

A recent study by Karina Schumann, a doctoral student in social psychology at the University of Waterloo in Ontario, found evidence that the reason women apologize more is because they have a lower threshold for what would require an apology. They are concerned with the emotional experiences of others, and more in tune with something that might disrupt the status quo. For when they do think an offense has occurred that would warrant an apology, it turns out that men and women actually give that apology the same amount of time – 81%. So the difference is in their perception of what is offensive. Does this mean men are under-estimating when they need to apologize, or that women are over-estimating when they should apologize? “Neither men nor women are wrong when they disagree about whether or not an offense has occurred or whether or not an apology is desired,” Schumann said. “It’s just that they have different perceptions of an event that has occurred between them.”

How, then, are women supposed to keep from over-apologizing? An apology only really makes sense if a relationship needs to be mended, because otherwise, it’s more beneficial to focus on the practical issues of the problem. Instead of “I’m sorry,” when you interrupt someone, say “When you have the time…” and when you make a mistake on a project, instead of “I’m sorry,” say “I made a mistake on this, but I’ll fix it.” Even “Unfortunately, I wasn’t able to complete this yet. Could I have so-and-so help out on it?” is better than “I’m sorry,” because it addresses the problem.

Mika Brzezinski, who co-hosts MSNBC’s Morning Joe, has written about the problem of women over-apologizing, and specifically how it affects their getting a raise. She writes, “They apologize before the conversation even starts, beginning the conversation with something like, ‘I’m sorry if this is a bad time, but…'” This does not inspire confidence. If a woman really believes she deserves a raise, or a promotion, or any forward movement in her career, she has to let her confidence come across to others in her workplace. If an offense occurs that really needs an apology, such as a personal slight between co-workers, then a sincere “I’m sorry” is due, but only to mend the relationship, and then move forward.
A recent ad by Pantene (yes, the shampoo brand) shows various situations where women are seen apologizing for things they don’t need to, and then it shows what they could say instead. If it comes down to a shampoo brand needing to tell us when to stop apologizing, then I’m sorry to say it, but that’s sad. You shouldn’t apologize for something unless it’s something that really warrants it. Then when it does, it can be more sincere. So remember, even if you don’t have shiny Pantene hair, no need to apologize.

Watch the “Sorry, Not Sorry” Pantene Commercial below: