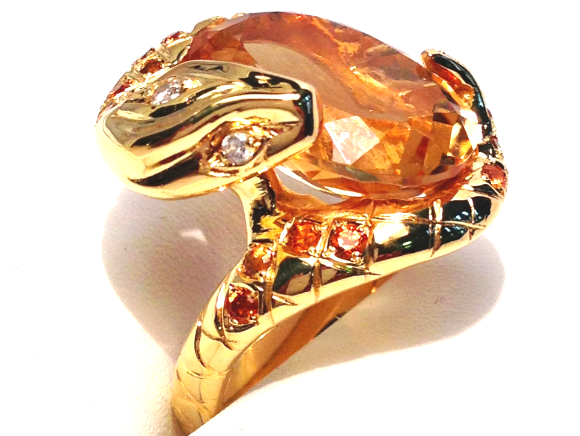 The Untitled Magazine’s Editor-in-Chief, Indira Cesarine, not only inspires readers with her globally distributed cultural title, but has inspired internationally renowned jeweller, Sabine Roemer, who has created and named a ring after her.  The ‘Indira’ ring was designed and handcrafted by Sabine, known for her one-of-a-kind pieces worn by celebrities and royals. The ring features a gold serpent curling around a faceted citrine, surrounded by white and chocolate diamonds, combined with varied shades of citrine.

2013 is notably the ‘Year of the Snake’. Snake (or serpent) jewelry has been worn since ancient times. Each era and part of the world seems to attribute its own symbolic meaning to this intriguing animal; eternal love, healing, fertility, wisdom and even immortality. In early Egyptian society it was the symbol of royalty. Cleopatra is probably the most notable historic figure to espouse the wearing of snake jewellery. In keeping with this spirit, Sabine Roemer saw Cesarine as the perfect muse for the “Indira” serpent ring.

Indira Cesarine began her career in fashion and advertising, having worked as a photographer internationally for fashion and lifestyle publications including British Vogue, GQ, Esquire, InStyle and Marie Claire to name a few. After many years behind the lens, as well as working as an editor for various publications, she launched “The Untitled Magazine”. The publication strives to present the most inspirational talent in entertainment, fashion and contemporary art – positive role models that can inspire creative audiences with an eye for originality.

Renowned jeweller Sabine Roemer emerged from Germany’s Pforzheim Goldsmith and Watchmaker School as its youngest female Master’s graduate. She has collaborated with the Nelson Mandela Foundation, designed bespoke pieces for numerous celebrities and public figures including members of the royal family as well as for brands such asand Fabergé and Swarovski. Sabine was nominated for the Jewellery Designer of the Year at the UK Jewellery Awards in 2010. She is noted for her global philanthropic collaborations, her unique vision and highly regarded reputation in the jewellery world. 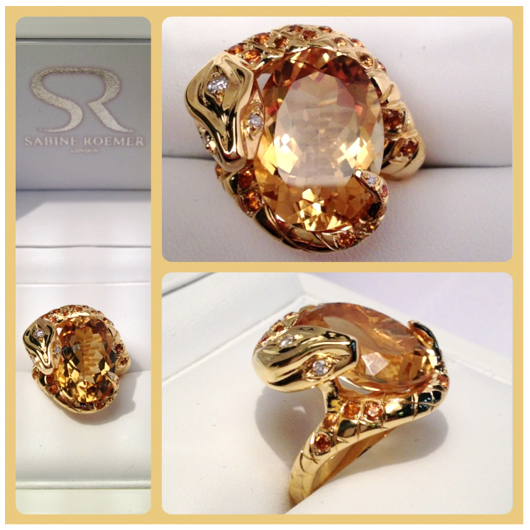 HISTORY OF SNAKE DESIGN IN JEWELRY

As lowly reptiles go, the serpent has had a remarkably high-profile career. – 2013: THE YEAR OF THE SNAKE!

Snake (or serpent) jewellery has been worn since ancient times. Each era and part of the world seems to attribute its own symbolic meaning to this intriguing animal; eternal love, healing, fertility, wisdom and even immortality. In early Egyptian society it was the symbol of royalty. and Cleopatra is probably the most notable historic figure to espouse the wearing of snake jewellery. Many Greek, Nordic, African, and Native American societies have all celebrated this intriguing reptile in gilded various forms with varying meaning, and the Romans regarded the snake as a symbol of everlasting love. In the Rabbinical Jewish tradition and in Hinduisim, the snake represents sexual passion and desire.

The Victorian era incited the proliferation of snake jewellery after Prince Albert proposed to Queen Victoria with the very first engagement ring, which was in the image of a snake with an emerald-set head.  For Victoria, the snake was an emblem of eternal love, making her betrothal ring the ultimate token of happily-ever-after.  Peaking in the 1840s, the snake represented wisdom and eternity during this period and was a ubiquitous motif on rings, bracelets, brooches and necklaces.

Despite the slight dwindling in popularity in times after Victoria, the snake enjoyed a brief resurgence during the Art Nouveau period with the help of the renowned French jewellers Jules René Lalique and Georges Fouquet.  Marie-Odile Briot put it best:  ”The serpent is an archaic underworld god, chased out of the Christian Paradise. Just like a gemstone, its plastic perfection makes it a striking sign of the sacred in nature. The snake is the living abstraction of the line which Art Nouveau would see as the underlying ‘biomorphic’ structure of form.”.

In its many forms — coiled in a knot, atop a ring or wrapped around the wrist as a stylish bracelet, the serpent remains a venerable favourite amongst jewellery motifs. Today, several jewellery houses like Bulgari and Boucheron have even incorporated the serpent into their Maison’s identity, using it as the central theme in several of their iconic collections.

THE “INDIRA” RING BY SABINE ROEMER

The bespoke “Indira” serpent ring is available for purchase from 2013 – The Year of the Snake. Ten percent of the sales will go to The Phukthar Monastic School, in Zanskar, Northern India, as well as the project www.fromyouwithlove.com, whose goal is to help building a new school in the region’s valley, where the children can be educated and play in a safe environment.

Visit http://www.sabineroemer.com for more information or if you are interested in ordering the ring.

0
The Untitled Magazine February 10, 2013
No Comments Yet