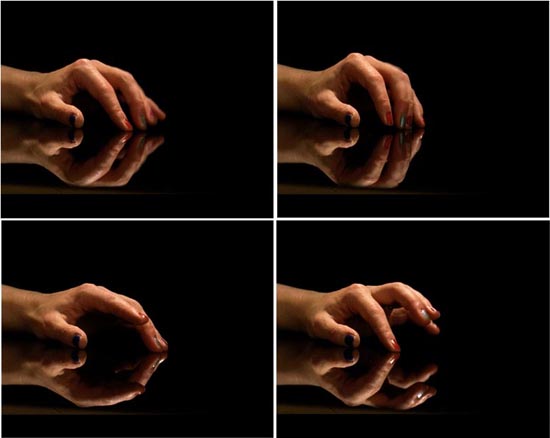 “Game Heart Matter” is an installation consisting of a new video, sculptures and photographs.  The title evokes Winterling’s interest in materials and the way the camera disrupts the relationship between the hand and the work.

Untitled (the peculiarly bulky epigram) (2012) is a two-minute loop made on 16mm film and transferred to DVD. It depicts the mesmerizing movements of a woman’s impatient fingers as they tap on and are reflected in a mirrored table. Dramatically lit against a black background, the woman’s hand is distinguished by different colored nails. The sensual dynamic hands are reflected again by the work’s projection into a corner with a mirror. The original hand ends up being four, a community of fingers that converge but never touch.

The themes of this video are also explored in a series of unique photographs titled Untitled (a skin too thin) (2012). These works sidestep the intermediary of the camera by imprinting the words “a skin too thin” directly into photographic paper. The works are produced by exposing different amounts of light onto diverse brands of photo papers – some glossy, some matte.

“Game Heart Matter” also includes works that pay homage to cultural figures that Winterling admires. A new sculptural work, Odd blocks needed: jigsaw falling refers to San Francisco-based poet, Kay Ryan, whose work Winterling encountered on her first visit to San Francisco in 2008. Another work,Untitled (the deferred period, from now on, for M.A.), evokes the memory of Michael Asher, an artist known for works that made the invisible visible. The piece consists of photo paper draped from the ceiling and rolled along the gallery floor.

Finally, the show includes Untitled (because we care), a wooden replica of a Kodak photo paper box. While most amateur photos exist only as jpegs nowadays, there was a time when everyone’s casual snaps were printed on Kodak paper. Given this recent history, the wooden box feels like a coffin, amemento mori of a defunct medium.

Susanne M. Winterling (b. 1970) is an interdisciplinary artist who received her MFA from Meisterschulerin and is a former member of Hamburg collective Akademie Isotrop. She has held numerous gallery and museum solo exhibitions throughout the U.S. and Europe, most recently at GAK Gesellschaft für Aktuelle Kunst, Camera Austria and Fotogalleriet, Oslo. Winterling lives and works in Berlin.

0
The Untitled Magazine February 9, 2013
No Comments Yet