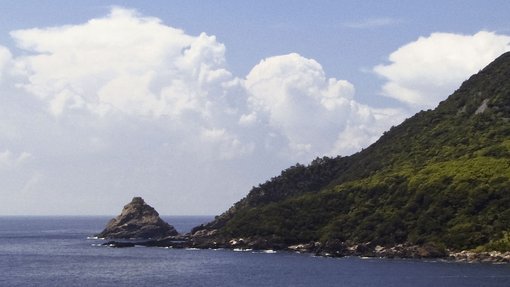 Paradise Row is pleased to present Kirk Palmer’s exhibition August Shadows. Palmer will exhibit a major new moving image work War’s End: An Island of Remembrance alongside two previous works Hiroshima (2007) and Murmur (2006) completing a trilogy of moving image works that centre on the atomic bombings of Japan in 1945.

War’s End: An Island of Remembrance follows the course of a morning on Yakushima, a near circular island in Japan’s Ryukyu Archipelago from first light. The work records the intensely beautiful environment, allowing its lush features and terrain to prompt the viewer’s own reflections. It is a vision of a small yet remarkably mountainous island, with a World Heritage listed wilderness core unchanged since 1945 and millennia beyond.

Jomon Sugi, an ancient Cryptomeria japonica tree, a symbol of the island’s endurance and longevity, is a central, recurrent presence in the work. These Japanese cedars are amongst the oldest on the island and Jomon Sugi is estimated to be up to seven thousand years old. To Palmer, it seems a strange and tragic fate that Yakushima, a place of such primordial beauty was the start-point for a savage moment of history. Accordingly, he has come to think of the island as a garden of remembrance.

The soundtrack of the work is a slowed down field recording made by Palmer of the original Angelus bell of Nagasaki’s Urakami Cathedral that stood only a few hundred metres from the hypocentre. The bomb detonated at 11.02am destroying the cathedral and silencing the Noon peal of the Angelus call to prayer. Slowed to 40 minutes, the length of time that Bockscar circled Yakushima, the Angelus peal coincidentally becomes suggestive of the sounds of war. At this pitch, the bell chimes evoke the ‘Pika Don’ the onomatopoeic Japanese term for the blinding light, ‘pika’, and thunderous boom, ‘don’, of the atomic blast, as described by those who survived it. The soundtrack becomes a malevolent presence hanging over the vision of the island.

Kirk Palmer (b, 1971, Northampton, UK) trained at the Royal College of Art. His works have been shown in many exhibitions in the UK and abroad at various institutions including the Kyoto Art Center in Japan, Galleria Civica di Modena, Italy (In Our World: New Photography in Britain) and the University of Nottingham, UK (Sites of Conflict Symposium: Kirk Palmer – ‘Hiroshima’). A solo exhibition of his works were shown at Matthew Bown Gallery in Berlin in 2011. In 2006, he won at The Conran Foundation Awards. Palmer has also been shortlisted and nominated for many prizes including the Prix Leica (2005), London Artists’ Film & Video Awards (2007) and the Salon Video Art Prize (2010). He lives and works in London.